Are Lithium Batteries a Good Choice for You? 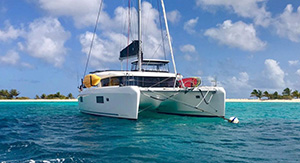 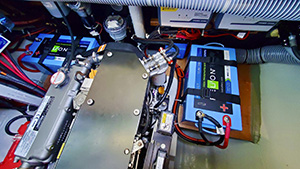 Lithium batteries operate at a consistent voltage through a majority of their discharge cycle. This difference means that Lithium batteries provide noticeably more power throughout a discharge cycle and do not respond with voltage “sag” when large loads are turned on. This helps to guarantee the dependable performance of electrical equipment and motors.

Lithium Batteries Charge at a Much Faster Rate

Lithium batteries are very efficient while charging due to their consistent or flatter voltage in the middle of the charging curve.  Lithium Iron Phosphate battery chemistry allows fast charging with accepted charge currents as high as 50% or more of the battery’s amp hour rating.  This means that with the right size charger, a full charge can be achieved in as little as two and a half hours. Finally, because Lithium batteries do not require a full charge after every use, they can be left in a partial state of charge without causing harm or shortened lifespan. These differences are summarized in the table below.

Lithium batteries weigh much less than their lead acid counterparts. Because of this, serious sailboat racers, who are always looking to gain an edge by reducing the weight of their boats, are an obvious application for lithium batteries. Powerboat owners can benefit as well; since the reduced weight of lithium batteries results in better weight distribution and less draft, they can get on a plane faster with less fuel consumption.

Is the cost of Lithium batteries justified? 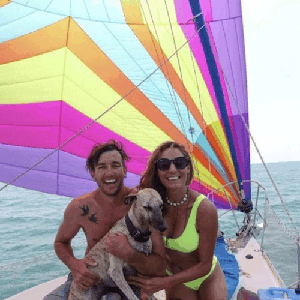 Bonita, Yoshi and their hound Marley enjoy an off-the-grid, solar powered lifestyle on their cutter-rigged sloop Nandji. According to Yoshi, the couple switched to dependable RELiON lithium batteries because, "Our lead acid batteries were simply not handling the constant strain we would put on them daily and they eventually died after just eighteen months."

Cost is often the first thing that comes to mind when it comes to lithium batteries.  In a group 31 size a Lithium battery typically costs 7 times more than a traditional lead-acid battery, and 3 times more than a high-performance AGM. The higher cost has been the primary barrier against boaters adopting lithium batteries.  However, the true cost of ownership is far less than lead-acid when considering life span and performance.  Lithium typically has around 10 times the lifespan of a traditional lead acid and 7 times the lifespan of a high-performance AGM. If you assumed a battery on a boat was cycled once per day, then a flooded lead acid battery would typically last a year, a high-performance AGM would last a little over a year, and a Lithium would last nearly 10 years. Depending on the cost of your current batteries, the frequency, and the way you use your boat, Lithium can pay for itself in just a few years.

RELiON Lithium batteries include an internal battery management system (BMS) that protects against harmful conditions before they occur. Think of this as the intelligence system that guards against users damaging their investment.  A BMS makes sure each cell in the battery remains within safe limits.  A well-designed battery management system can help maximize the lifetime and ensure the safe operation over a wide range of conditions.  Conditions that the BMS protects against are over-voltage, under-voltage, over current, over-temperature and short circuit protection. When a BMS enters protection mode, the cell pack is electrically disconnected from the battery terminals and the battery voltage is no longer available. When the fault condition is removed the BMS will recover, and voltage is restored. We should mention that due to the protection the BMS provides against abuse or user error, RELiON (who warranties their batteries for 10 years) reports virtually zero returns. For more information about the BMS, please consult the applicable RELiON spec sheet or owner’s manual.

What type of battery charger do Lithium batteries require? 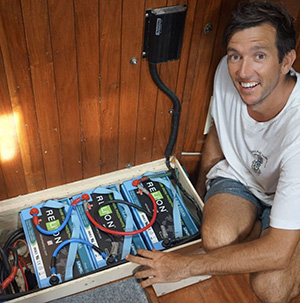 In standard conditions, Lithium batteries have a flatter voltage profile which allows the charger to provide maximum current longer resulting in faster charge times than lead-acid. For that reason, to maximize the potential of a lithium battery we recommend pairing it with a charger that has a designated Lithium charge profile. West Marine offers multiple chargers compatible with Lithium like the ProMariner ProNautic and ProSport HD battery chargers. Additionally, all Mastervolt battery chargers, DC to DC converter, and Inverter/Chargers are Lithium compatible.

When the BMS disconnects the battery, it disconnects it from the charging sources and the loads, so while the battery will be protected, disconnecting a battery from the entire electrical system could have other adverse effects.

Since Lithium provides consistent voltages throughout the discharge cycle, voltage is no longer an accurate measure of state of charge. A traditional voltmeter that provided insight into the level of charge in a lead-acid battery will not be effective for monitoring lithium batteries.  The only way to measure the state of charge of lithium is with a State of Charge (SoC) monitor. We recommend SoC meters with shunts that monitor all the amperage flowing in and out of the battery. West Marine offers multiple SoC meters like the Blue Sea Systems M2 DC Multimeter with SoC.

What Size Lithium Batteries Do You Need?

As discussed earlier one of the primary benefits of Lithium batteries is the ability to deeply discharge vs lead-acid. When selecting the proper amp hour size or quantity of lithium batteries we still recommend creating an energy budget as outlined in the West Advisor Article Sizing Your House Battery Bank. The only difference is when creating an energy budget with Lithium you don’t have to be concerned with restricting your depth of discharge to 50%. For example, if your energy budget per day is 120Ah with lead-acid we recommend a 3-4 multiple resulting in a battery bank 360-480Ah. With Lithium the Ah per day multiple can be 1.5-2, or in this example 180-240Ah. For most boaters this will allow the use of less and/or smaller Lithium batteries in a boat that previously used lead-acid.

Just like with lead-acid batteries, connecting Lithium batteries in parallel to increase capacity is acceptable. For example, wired in parallel 3X 100Ah batteries will result in a 300Ah bank. However, it is recommended to consult your battery’s owner’s manual for designing battery banks of five or more batteries.

Charging Lithium Batteries with an Alternator 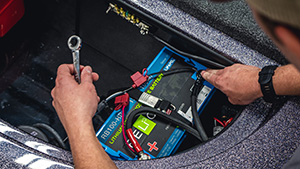 Lithium batteries have been in wide marine use and successfully charged by alternators for several years now.  Like with standard AC battery chargers it is critical to ensure your alternator/regulator is compatible with Lithium.  Anytime the battery’s BMS determines charging in unsafe levels it will disconnect the battery from the system. With AC charging this is not a major issue, but with alternator charging that could mean your alternator is running with no battery present which could back feed and damage components. For that reason, we recommend only pairing lithium batteries with alternators and regulators with designated lithium profiles. West Marine offers multiple external regulators from Balmar and Mastervolt that work with lithium.
A recommended alternative to changing out an alternator is to install a DC-to-DC converter. These devices allow you to leave the alternator connected to the existing lead-acid battery bank. The DC-to-DC converter then connects the lead acid bank to the lithium bank and appropriately isolates, and properly charges, the lithium bank using the existing alternator. West Marine offers multiple DC-to-DC converters in various sizes and styles from Mastervolt.

Series connections may also be needed when sizing a battery bank for the correct voltage.  For example, boaters will often connect 3 x 12V Lithium batteries in series to power a 36V trolling motor.  One must be selective though as not all Lithium battery models are designed to be wired in series.  The series capability is listed on all RELiON battery specification sheets.  For example, the RB100 battery allows for connecting up to six 12V batteries in series for a total of 72 volts.  Keep in mind, the best way to charge a battery bank connected in series, is to use a charger that has a dedicated charging lead to each bank like the ProSport HD line of battery chargers.

One of the additional benefits of lithium is the availability of batteries at a nominal voltage above 12V. West Marine offers multiple 24V lithium batteries.  This enables 24V customers to simply purchase one battery to achieve their system voltage and then connect them in parallel if more capacity is desired.

Can Lithium batteries benefit you? 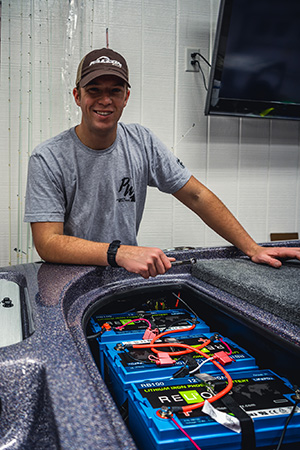 How you use your boat will be one of the largest factors in determining if Lithium makes sense. We have found that boaters with heavy electrical load requirements are the ideal candidates for a Lithium battery system.

While Lithium may not be right for all boat applications, we hope this article has given you information to consider if Lithium is right for your next battery replacement.