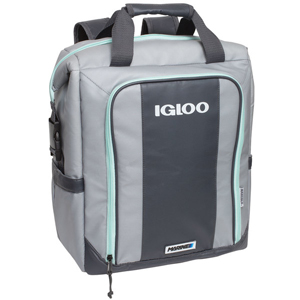 This soft-sided cooler backpack from Igloo holds up to 30 cans.

Coolers provide an easy way to keep food, beverages, bait or your day’s catch fresh during transport on land or water. Your choice of a cooler (or coolers) should depend on the size of your crew, the duration of the outing or cruise and of course, your budget.

Coolers vary in size, type of construction, durability, impact resistance, ice keeping ability and in other respects, including handles, hinges, latches and in some cases, wheels for portability. There are three basic types of coolers: soft-sided, hard-shell and electric coolers, which do not require ice.

Soft-sided coolers are good for keeping food and beverages for one or perhaps two days. Designs vary: some consist of a hard inner liner with an insulated fabric shell, sort of a hard/soft cooler; many are flexible inside and out, which enables them to be compressed for compact storage; most offer features that hard-shell coolers don’t, such as padded carry straps and exterior pockets for car keys, cell phones or a GPS.

They fit nicely into the crowded environment of small boats, with soft exteriors that enable them to squeeze into odd nooks and crannies along with other gear aboard. Soft-sided cooler capacity varies, from small models that only hold a couple six packs up to much larger sizes. 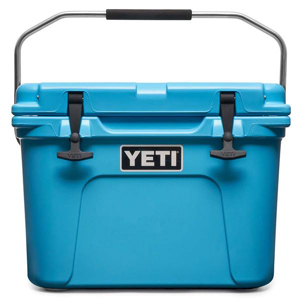 Yeti’s Roadie 20 is an easy-to-carry, roto-molded cooler, making it the perfect companion for your kayak, canoe, ATV or golf cart.

Looking for a hardshell cooler with ultimate durability that can take a pounding on a heaving deck? Then consider a roto-molded cooler. These coolers can take almost any amount of abuse. The impact resistance of these coolers is excellent and the hardware is outstanding. All boast strong, rubber T-latches and robust, self-stopping lid hinges. Most include recessed grab points, non-skid feet and handles that store out of the way. Ultimate durability costs, but if you want one of the most “bullet proof” coolers that money can buy, one of these might be for you.

Our Igloo and Yeti selection includes coolers with wheels and telescoping handles, which make it easy to cover long schleps from your car to your boat or camping spot. For many coolers, optional cushions are available to convert your cooler into a comfortable seat. Check to see if the cooler you want comes with a food storage rack. If not, check to see if one is available. If you will be keeping your cooler on deck, consider a tie-down kit and/or a set of corner chocks.

What Size Cooler Do I Need?

The size you select should depend upon the intended use, the number in your party and how long you will need to keep items cool. A small soft-sided or hard shell cooler is fine for a day trip but longer outings need something bigger. How big? Cooler capacity is generally stated in quarts or capacity in 12-ounce cans. One quart equals about 0.75 cans, so a 24-quart cooler will hold about three six packs or 18 cans.

Another way to gauge capacity is to divide the capacity in quarts by 30, so a 60-quart cooler equals two cubic feet. When selecting a cooler, remember that about 30-50 percent of its capacity will be taken up with ice. For three people on a day trip, a 40-quart cooler is generally fine. For the same group on a weekend camping trip, a 50- to 60-quart cooler is good. Try not to buy a cooler that is too large, as tightly packed coolers keep food colder and longer. Purchasing a jumbo sized cooler and filling the excess space with ice might seem OK, except for the expense and extra weight you will have to carry.

Conversely, an excess of air or open space inside an overly large cooler makes the ice melt faster. An exception to this conservative approach is offshore fishing coolers. How big are the fish you plan to catch? We can’t answer that, but we can say that most anglers would be loath to cut their trophy sized catch in half in order to bring it home! Examples of coolers commonly used for offshore fishing excursions include coolers by Igloo, Engel and YETI in the 150-250 quart class.

Two Coolers Can be Better than One

Let’s say you and your spouse are planning a five day camping trip and are ready to pull out the stops and purchase a 100-quart cooler. But consider this: a 100 quart cooler fully loaded with food, drinks and ice can weigh up to 200 pounds—so unless you are bulking up for a body building event, purchase two smaller coolers—one for drinks and one for food. You will be opening the drink cooler a lot more often than the food cooler which means that the ice in the food cooler will melt slower and that the food will keep longer. 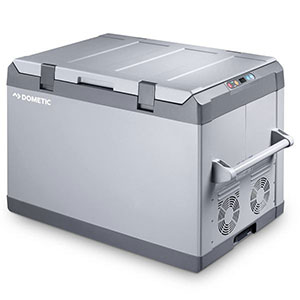 Dometic's 112 quart Coolmatic portable refrigerator features a digital control panel to adjust the temperature and can be used as a fridge or freezer.

There are two main types of electric coolers, which operate on 12V DC current supplied by your boat or vehicle’s cigarette lighter: compressor driven and thermoelectric.

Thermoelectric coolers rely upon an electronic phenomena known as the “Peltier effect” to either heat or cool their contents. In addition to not having to deal with slushy ice and wet food items, available space for food storage is increased due to the absence of ice, which in a conventional cooler takes up a large percentage of available space. The disadvantage is that cooling capacity is limited by the ambient temperature, which means a thermoelectric cooler rated to cool 40°F below ambient temperature will on a 90°F day only cool the contents down to about 50°F.

Select a cooler according to how much food you need to store and the purpose of your trip. Soft-shell coolers are convenient for short outings, but don’t expect them to keep ice like a hard shell cooler can. Don’t buy a cooler that will be too heavy to carry and if you need the extra capacity, consider purchasing two—one for food and one for drinks. For ultimate durability, roto-molded coolers are best. Offshore anglers think big!