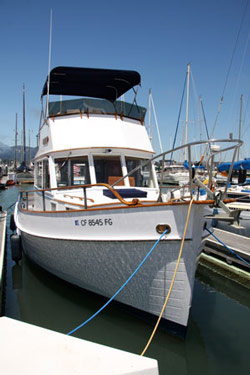 This 32' Grand Banks trawler has multiple fuel-burning devices that all need maintenance for safe operation. A CO detector is important insurance in case something goes wrong.

Carbon Monoxide (CO) is a silent killer on houseboats and other recreational vessels. Each year, boaters are killed or injured by carbon monoxide, and virtually all of these poisonings are preventable. We’ll discuss monitoring devices to alert you to this danger, but first, we remind boaters that regular maintenance of your boat’s mechanical systems and proper operation of your boat are the best defenses against carbon monoxide.

CO is created as a result of incomplete combustion in appliances like gas powered electrical generators, propane stoves, heaters or a boat's internal combustion engine. CO gas is odorless, tasteless, initially non-irritating but can be deadly. Because CO is lighter than propane or gasoline vapor, without smell or taste, its presence remains undetected by humans until symptoms of exposure set in.

Exposure to CO is possible in enclosed or poorly ventilated spaces where exhaust from a gasoline or diesel engine, generator or open flame from a fueled cabin heater or galley appliance can collect. Exposure time and concentration levels determine what effect, if any, this exposure has on our bodies. Amounts over 100 parts per million are dangerous to human health. CO is easily absorbed in the bloodstream (combining with hemoglobin 200 times more easily than oxygen) where it reduces the blood's oxygen carrying ability, leading to hypoxia and causing "suffocation" of the victim. Typical symptoms of CO exposure could easily be mistaken for seasickness because they trigger dizziness and nausea. We think this alone warrants the investment in a good CO detector on any boat.

If you or a crew member are showing signs of CO poisoning, immediately move the victim to a location with fresh air. It is a good idea to shut down all possible sources of CO before determining next steps. Acute exposure to CO is classified as a medical emergency and should be treated at a hospital.

The rate at which CO is absorbed into the bloodstream depends on its ambient concentration and a person's length of exposure. The table below lists symptoms of CO poisoning which can vary from a slight headache to death. 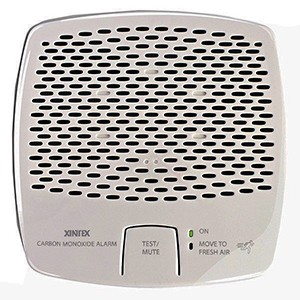 CO Detectors can be wired to your boat's DC 12-volt system or are battery operated.

Inspecting Your Boat for CO Hazards

Take the following actions whenever you use your boat. Do not operate the vessel if any of these problems exist!

Annually by a Qualified Marine Technician

What to Look for in CO Detectors

Multi-channel monitoring: This function allows detectors to measure fumes in different cabins. For example, carbon monoxide detectors like the Fireboy-Xintex CMD5-MD-R allow up to ten detectors to be linked together. When one detector’s alarm activates, all connected detectors will alarm to alert boat inhabitants in other locations to the presence of CO.

Sensitivity: CO alarms will sound when they measure 70 particles of carbon monoxide per one million particles of air (PPM), well before the first symptoms of overexposure set in.

Sensor mounting position: Install carbon monoxide detectors or remote sensors at or near eye level in each cabin but NOT near a hatch or porthole where water could come in contact with the device.

For more about carbon monoxide poisoning and what you can do to prevent it, read Carbon Monoxide Poisoning a Dangerous Combination, which orginally appeared in United States Coast Guard Boating Safety Circular 86.