Turning Fear Into Knowledge and Respect

Are you intimidated by your boat’s electrical system? If you are, you are not alone. Electrical shocks, short circuits and fires are potential calamities that should inspire serious respect. Those of us who do not understand basic electrical theory often leave onboard electrical work to the experts—generally a wise solution.

While calling an expert to solve an electrical problem works well when your boat is safely tucked away in its home port, what do you do if you happen to be anchored in a remote harbor, sailing offshore, or powering on the Intracoastal Waterway? When there are no experts available you may need to rely on yourself to make simple repairs. This West Advisor will give you some of the basics about circuit protection and the distribution and monitoring of electrical power on your boat. We can't make you an electrical expert in one Advisor, but perhaps we can help you get started. We also offer a selection of books to help you learn about your boat’s electrical system—such as Nigel Calder’s excellent "Boatowner’s Mechanical and Electrical Manual", among others.

Wires used in electrical circuits need some method of protection to prevent fire or damage if there is a short circuit or an overloaded circuit. A short circuit occurs when electricity travels from the positive to the negative conductor without passing through an electrical load (a device that consumes the energy, creating electrical impedance), allowing more electricity to flow than the wire can handle. Heat builds up and eventually melts the insulation, which can cause a fire or damage to the electrical system.

Two types of products protect wires from short circuits: fuses and circuit breakers. Fuses are devices that melt or destruct at a certain current flow, like five amps. Once they melt they must be replaced. Circuit breakers are mechanical devices that trip and open the circuit without damage to themselves. Since circuit breakers can also be used as switches, they are frequently stacked in a row in a distribution panel. They are also measured by the current (amperage) it takes to cause them to trip.

Fuses are also used to protect an electrical device from its own destruction. For example, fuses will commonly blow if you hook up a VHF radio with reverse polarity (positive connected to negative, and vice-versa). The fuse blows to protect the inside of the radio from a meltdown.

Styles and Sizes of Fuses 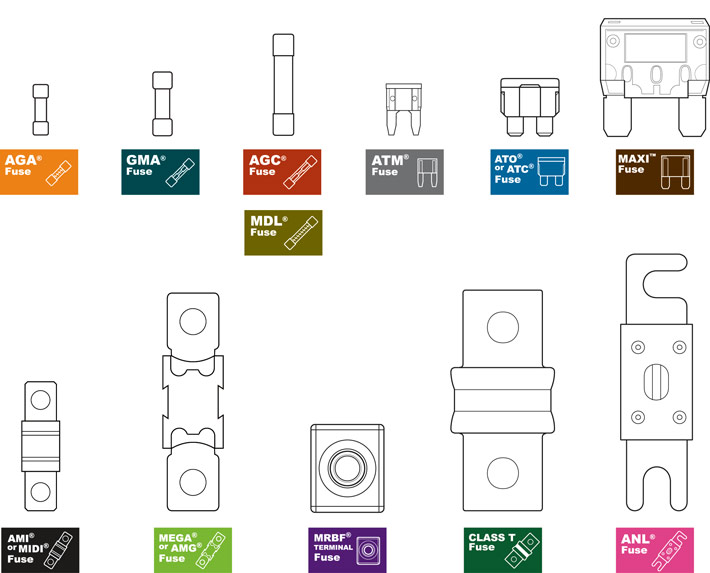 Fuses are available in a variety of configurations. Slow-blow fuses hesitate for a few seconds before blowing to allow products with a short term, high amperage draw to start up. AGC fuses are small glass cylinders, which allow you to see whether the fuse element is intact or not. They are used in inexpensive fuse panels. ATC fuses are automotive style and plug into a two-pronged socket. They are rapidly replacing AGC fuses in a number of applications. Fuse holders provide a way to install a fuse in the positive conductor of a circuit. They are available to fit AGC and ATC fuses and are available in waterproof and non-waterproof versions. Fuses should be installed as close to the beginning of the positive conductor as possible, to protect the greatest amount of wire.

Here is an over-simplified guide to size selection:

Selecting the correct breaker size is a real problem for most custom and standard panels on the market. The issue is the impossibility of anticipating what breakers will be needed on a distribution panel since all boats are different. Blue Sea Systems solves this problem simply. They reason that the majority of circuits onboard will have loads of less than 15A (certainly that is the case with most electronics, lights, pumps, and small refrigerators). They also reason that most wire used for circuits will be at least 14-gauge, although it may be as small as 16-gauge. Therefore, they supply their panels with 15A circuit breakers throughout the panel, for the following reasons: 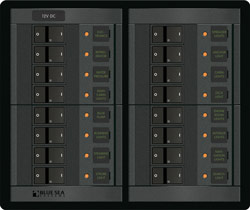 Distribution panels let you selectively turn on and off the circuits that provide electricity to DC loads on board. They may be combined with one or more monitoring functions like amperage, voltage, or amp-hours. Most boats over 20 feet or so will have one or more distribution panels that allow circuits to be switched off and on, and provide some form of over-current protection to protect wires and loads from damage.

Over-current protection means that if something happens to an electrical circuit that makes it consume more electricity than normal, the circuit will automatically turn off. This is done with either circuit breakers or fuses, just like in home wiring systems.

Most panels have between 4 and 12 circuits. This means they can control and protect circuits used for a variety of applications like radios, lights, bilge pumps, refrigerators or electronics.

Distribution panels from many vendors come in industry-standard sizes so they can be stacked vertically or horizontally as needs dictate to create larger capacity. Panels are most commonly 5 1/4" wide, with lengths of 3 3/4", 7 1/2", 10 1/2", or 11 1/4".

AC panels (alternating current, or shore power) are almost identical to DC panels (direct current, or battery power), but they include a main breaker to disconnect all the AC circuits at once. This is like the main circuit breaker on the outside of a house. The individual circuit breakers in an AC panel are the same as those used in a DC panel. They also have a reverse polarity light that glows when the dock or inverter is wired incorrectly. Many marinas are wired incorrectly so that the white conductor is actually hot and the black is neutral. Don’t panic about the terms; what it means is you can either electrocute yourself or have severe electrolysis on your boat if the problem is not rectified. If this reverse polarity light goes on, you should disconnect AC power from your boat and find out what the problem is.

Choose a panel based on the number of circuits on the boat, for both AC and DC. We also offer panels that have special features like waterproofness, lighting and built-in meters.

DC panels vary based on a number of design details. Here are some things to look for: 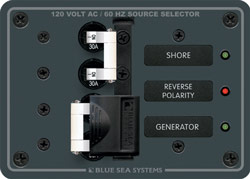 Not surprisingly, the Blue Sea Systems panels include all the above features. They just might be the nicest, most well thought out panels on the market. AC panels are slightly different than DC versions because you need to disconnect both the hot and neutral conductors at one point in the system (the Master AC Breaker). You may also need to select between two or more sources of AC power on a boat: inverter, generator, or shore power. The challenge is that while it is generally OK to have two DC sources online at the same time (battery charger, battery and solar panel), it is not OK to have two AC sources on simultaneously.

AC sources have to be perfectly synchronous (be positive and negative at the exact same instant) and it becomes difficult to do this with multiple sources. This is why AC Source Selector panels generally have a slider or lock which prevents more than one of the circuit breakers from being turned on at the same time. On the Blue Sea Systems panel, there is a plastic slider that prevents both breakers from being activated at once, which might put the shore power and inverter on simultaneously.

The ABYC (American Boat and Yacht Council) has extensive information on how to wire distribution panels, since doing it the wrong way can lead to boat fires and electrocutions. Chapter E-8 of the Standards deals with AC circuits, while Chapter E-9 deals with DC circuits. When in doubt, this is the place to find out the safe way to wire a boat. 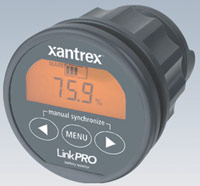 Electrical system monitors provide a way to see and understand what is normally invisible. Since most of us have trouble counting electrons or understanding voltage, monitors are used to show us what is happening in our electrical system. For decades, boaters have gone to sea with only an approximate idea of how much energy their batteries contained, and when it would be appropriate to charge their batteries. It has also been difficult to tell when a boat’s batteries needed replacement, and batteries are often replaced prior to the end of their useful life. Therefore, battery monitors or electrical system monitors provide a great benefit.

When we refer to an electrical monitor, we imply that it contains all three basic functions: volts, amps and amp-hours. Since amp-hours are the best way to know your battery’s state of charge, and since voltage and amperage are also helpful, a combination meter which measures all three is the best solution for boats over 30 feet.

We’ve seen real advancements in electrical system monitoring in the last decade, and now we have really great, cost-effective combination meters that tell you exactly what you need to know about your electrical system. Besides the three main functions, meters like the LinkPRO tell you things like operating time remaining until you need to recharge, deepest battery discharge, average level of discharge, and charging efficiency. There isn’t much to the sizing of a monitor, since almost all of them will read to 500A, enough for all but very large boats.

Separate meters can be added to existing electrical systems. Voltmeters, ammeters, and percent meters by themselves are not as comprehensive but are still helpful to see the status of your system. Most large inverters can be hooked up to remote panels, which vary from remote ON-OFF switches to complete monitoring systems. Besides turning the inverter or battery charger on and off, many panels monitor shore power breaker settings, battery state-of-charge and equalization, and some automatically start your generator when the battery voltage drops or cabin temperature rises, so your air conditioner can run.