Combating Mold and Mildew on Boats 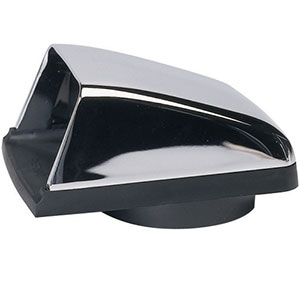 Mold, mildew and the odor they create can be a problem even on boats that appear to be clean and well ventilated. This is because, apart from the visible areas in a boat’s cabin, there are many areas that offer the dark, moist environment that these fungi crave. Think under quarter berths, v-berths, settees, hanging lockers, lazarettes, under cockpit seats, chain lockers, and a host of other hidden areas, many of which are barely accessible, if at all.

This Advisor discusses tactics and measures you can employ in what amounts to a continuous fight. Once you get a handle on it, your cabin will smell a whole lot fresher—and those itchy eyes and that mysterious cough that you may have been experiencing might just go away too.

To prevent mold and mildew, you need to ensure that your boat is well ventilated. This can be as easy as opening hatches or portholes to create cross ventilation. But for times when you are away, you will need to rely on either active or passive ventilators to keep the moisture level down. Passive ventilators, such as cowl vents, clamshell vents, louvered vents, ventilating sails, ports and hatches provide an access path for air to enter or leave the interior of the boat. As long as either the boat or the air itself are moving, they work just fine.

Active ventilators, such as Nicro’s Day/Night Plus Solar Vents incorporate a fan to keep air moving even when the boat or breeze is still. Solar energy or ship’s power is used to power the fan, depending on the ventilator. These vents come with both intake and exhaust fan blades for flexibility in creating your ventilation system. 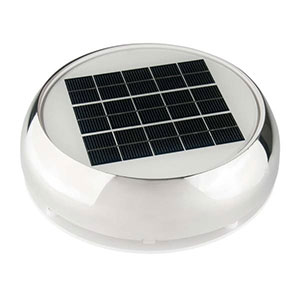 When you are away from your boat, it is a good idea to leave the doors to hanging lockers and other enclosed spaces open to allow air to circulate and reduce moisture. This includes the spaces underneath your boat’s cushions, which can be left turned on their sides with the access covers to hull areas underneath removed.

Controlling mold is a continuous battle that requires a multi-pronged, proactive approach. I say “control” because you will never entirely eliminate mold and mildew from your boat. This is because their spores are virtually everywhere, and to grow and reproduce, all they need is moisture, the right temperature, and food—which can be virtually any organic substance, meaning any material that contains carbon atoms. This includes running rigging, stored anchor rode, upholstery fabrics, the inner surface of a fiberglass hull—even something as subtle as the oil that your hand leaves on a piece of stainless steel.

Following is a general plan of action for removing existing mold and mildew, and once it is removed, to keep it at bay. 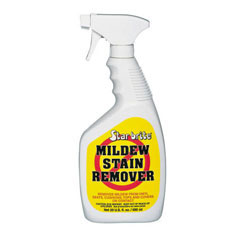 A mold and mildew cleaner like Star brite's Mildew Stain Remover is a great way to tackle mold on your boat.

Step One: Remove the Mold

To remove mold and mildew, try using a solution of bleach, water, TSP (Tri-Sodium Phosphate) and powdered laundry detergent mixed in the following proportions: Four quarts of freshwater, one quart of bleach, 2/3 cup TSP and 1/3 cup of laundry detergent. Alternatively, you can use an off-the-shelf product specifically formulated for mold and mildew removal, of which there are two types: those that contain bleach and those that don’t.

Among the best of the bleach-based products is Star brite’s Mildew Stain Remover. Offered in a 22-ounce trigger spray bottle, it gives you the ability to direct the spray into hard-to-reach areas, such as under quarter berths, or up into chain lockers. Among the products that do not contain bleach, Practical Sailor rates Spray Nine Cleaner as, “A top performer with the best price”. It too is offered in a trigger spray bottle and affords the same ease of application as the Star brite product.

In either case, use the product liberally, taking care to spray it into hidden, hard to reach areas. Sop up any runoff from these products with some rags, which you will need to dispose of at the end. Also, when removing mold, the EPA suggests wearing an N95 particulate mask. We would also suggest rubber gloves, coveralls and protective eyewear to keep the spores from harming your body. 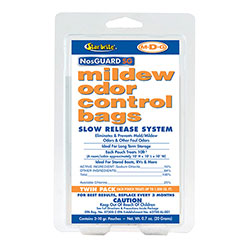 After removing the mold, follow up with one of the MDG products by Star brite. These products use chlorine dioxide technology to create a penetrating vapor that kills mold along with the odor that it creates. This vapor will penetrate nearly everywhere, including into fabrics and also into areas that you might have missed with the spray. Choices include MDG Fast Release, and MDG Slow Release, which can be used in occupied boats. It works for up to three months and is ideal for continuous treatment of your boat’s cabin during winter layup.

Although mildew blockers work only temporarily, applying one will give you a temporary leg up in what amount to a continuous battle. According to Practical Sailor, one that works reasonably well is 3M’s Marine Mildew Block.

Star brite, DampRid and MaryKate all make dehumidifiers that use calcium chloride crystals to remove moisture from the air. In some cases, the moisture gets deposited into a reservoir, as with DampRid’s Easy-Fill Moisture Absorber or the No Damp Ultra Dome by Star brite. These systems are effective, but are prone to spillage unless emptied on time. A better choice for hanging lockers and areas underneath settees and berthing areas are DampRid’s Moisture Absorbing Sachets or MaryKate’s Moisture Control Bag, both of which retain the condensed water in a bag or pouch. 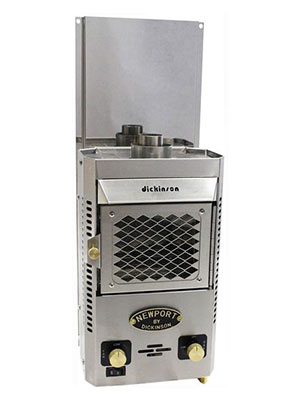 Many boats are equipped with a propane or diesel cabin heater or stove. Unfortunately, these appliances can increase cabin humidity, because the principal by-products of combustion are carbon monoxide and water, some of which, in the case of most heaters and nearly all stoves ends up in the cabin, where the water will tend to condense against cool interior surfaces— which can result in the formation of mold and mildew.

To prevent this, when using a propane or diesel cabin heater or stove, open your boat’s hatch to let the combustion gasses escape, which is something you should do anyway to limit the possibility of carbon monoxide poisoning. One type of fueled heater that does not present these problems is Sig Marine’s Direct Vent P9000 Propane Heater, with an ABYC-certified design that isolates all combustion air and eliminates the possibility of oxygen depletion, dangerous combustion gas emissions or condensation.

At the dock, evaporating moisture with an electric cabin heater is a good way to keep surfaces dry. For engine and mechanical spaces there are engine room heaters as well. When you are absent from your boat, low-level heating devices, such as the West Marine Air Dryer and the Goldenrod Dehumidifier are a great way to chase the damp away.