If you have found changing your inboard engine oil to be a difficult, time consuming and messy process, you are not alone. In the case of many installations the sump plug is incredibly hard to reach. Even if the plug is accessible, there’s often not enough room for a container to catch and hold the oil as it drains out. In spite of these difficulties, changing your oil at appropriate intervals is the most important thing you can do to maintain engine health and performance.

Owner’s manuals vary in their recommendations, typically every 50 to 100 operating hours, but regardless of what yours says, total run time cannot always be used as a reliable guide for when to change engine oil. Actually, the amount of time that your engine sits idle is equally important. This is because dirty oil in idle engines combines with water to form caustic acids, which can damage inner-engine surfaces. In addition, other operating conditions unique to the marine environment may dictate more frequent oil changes.

Sailboat auxiliaries in particular are often used for short duration motoring, running the engine just to get into or out of the marina, which does not allow the engine to reach operating temperature for any length of time. This contributes to the contamination of the oil, due to condensed water, which turns to acid in the crankcase, and to an inability to get particulates into circulation where they can be removed by the oil filter. For this reason, it is critical to operate your sailboat engine long enough to allow it to warm up, and to keep it on a frequent oil change maintenance program. At a minimum, we recommend that in addition to changing oil per the manufacturer’s recommendation, that you change engine oil prior to winter lay-up and/or at the beginning of a period of non-operation. 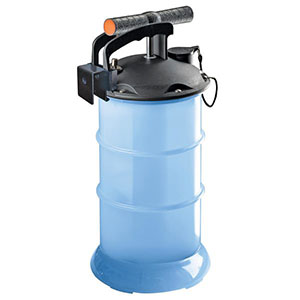 Our West Marine Manual Oil Changer is great for outboards with capacity of up to 2.9 quarts. 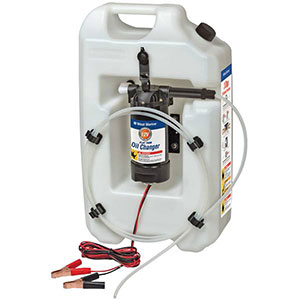 Choose an oil changing method that works well for your particular engine installation. Where space exists under the engine but hull geometry precludes placement of a standard catch pan, try the following. First, line the area under the sump with oil-absorbent cloths. Then take a small cardboard box and cut the sides down to a height that will allow placement under the engine sump. Double line the box with two plastic garbage bags, and slide it underneath, bending the box to shape as necessary. (Note: First check the capacity by filling the plastic-lined box with water). Next, remove the sump plug and drain the oil. After the oil has drained out, carefully draw the bags shut and knot off. Dispose of the oil at the nearest recycling facility.

For installations that preclude workaround methods such as this, use an off-the-shelf system such as an oil change pump. These systems vary in capacity, convenience and cost. The most basic are manual hand pumps like the Little Pal, which withdraw the oil via the dipstick tube and deposit it into a separate container. Somewhat more sophisticated are self-contained manual systems, such as our West Marine Oil Extractor, which also include a container into which the oil is deposited. Due to the small diameter of the withdrawal tube, these systems require patience and manual dexterity on the part of the user.

Moving up the ladder of convenience are 12-volt systems, like our West Marine Professional Oil Changer and Flat Tank systems, which replace muscle-power with an electric pump. For ultimate convenience, many owners with larger engines or multiple installations prefer the convenience of systems that plumb directly to the sump drain itself. These systems, represented by products from Reverso and Groco, quickly drain the oil at the flick of a switch. Many employ a manifold design making them more convenient for multiple engine installations. In addition to removing dirty oil from an engine, they can also be used to refill the crankcase with fresh oil. 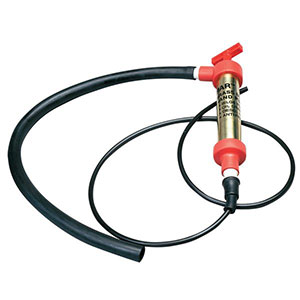 Jabsco's Little Pal hand pump lets us get the oil out of the hard-to-reach Atomic Four engine (and the transmission) of our Newport 30.

The engine should be run up to operating temperature first, before you begin the oil change. Warm oil is thinner so it is easier to withdraw through whatever method you use—especially if you’re using a dipstick tube. Plus, running the engine mixes all the gunk and contaminants into suspension, so you’ll be able to get all of the dirt out of the engine.

You also need to be prepared with oil-absorbent pads to keep even small drops of oil out of your bilge. Meticulous attention to cleanliness is important, not only to keep your bilge looking and smelling fresh, but also to prevent any oil from going into the water when the bilge pump operates. The authorities will hold you responsible for cleanup costs if you discharge oil that causes a sheen on the water’s surface in your marina.

When you change your oil, always replace the oil filter. Before installing the new filter, lightly coat the gasket with oil and then hand tighten, giving it a three-quarter turn beyond the point where the seal makes contact with the flange. Your used engine oil can serve as an indicator of engine health. For example, a milky color indicates that water has entered the crankcase, and the presence of metal particles may indicate excessive wear. When in doubt, consider having your oil analyzed. Periodic oil analysis can give you a very good idea of engine health. For the location of a testing lab, consult an engine surveyor. 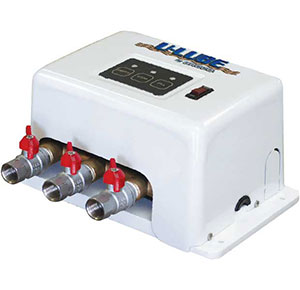 This Groco U-Lube Oil Change System is permanently plumbed to your twin engines and generator, and includes a reversible gear pump.

Before purchasing new oil, remember that oil that is great for a gasoline inboard is not always right for a diesel. Your owner’s manual should state the API (American Petroleum Institute) and SAE (Society of Automotive Engineers) ratings that denote the correct oil for your engine. These ratings should appear on the container of the oil you buy. API ratings that begin with the letter C are formulated for use in diesel engines. Ratings that begin with the letter S are formulated for gasoline engines.

The letters C or S are followed by a second letter that indicates the complexity of the additive package. These letters ascend up the alphabet. Oils containing more complex additive packages can, in general, be used with prior formulations. For example, if you own a diesel and the manual says, “use CD”, oil rated CE will be fine. Many oils are now formulated for use with both gasoline and diesel engines. For example, Chevron’s 30 and 40 weight Delo 400 is currently rated CF-2 and SJ. The SEA rating for the oil’s viscosity should also appear on the container. Single viscosity oil is better for engines that operate within a narrow temperature range. Multi-viscosity oils are good for engines that operate within a comparatively wider temperature range.

Viscosity is a measure of an oil’s thickness and ability to flow at certain temperatures. Higher numbers indicate thicker oil, which protects better in high temperatures.