Installing one or more photovoltaic solar panels on your boat is a great way to keep your batteries topped off and in larger installations replace the power consumed by house loads. Small panels maintain or trickle charge batteries while you’re unplugged from shore power. Larger panels also charge batteries—and can produce enough energy to power appliances, like an inverter used for producing household-type AC power.

Who can use solar panels?

Small boats: A solar panel can keep the battery fully charged when the boat is on the trailer, at a mooring or sitting at her slip. All batteries self-discharge, and a small panel can eliminate the problems caused by dead batteries. Since solar panels put out pure DC power, they are excellent chargers as long as they have a regulator in the circuit when they require it (see below).

Cruising and racing sailboats can use solar panels to augment or replace their other charging sources. Many sailboats that go on long passages have to use their propulsion engine for one to two hours per day to charge batteries and replace the energy that’s been consumed. With a couple of solar panels installed, these boats can often extend their time between engine uses by a day or more. Truly efficient solar-equipped boats may not have to use the engine for charging at all. 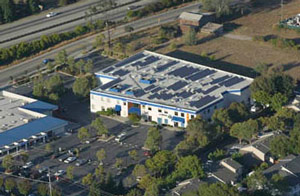 As part of our company Mission Statement and our commitment through our BlueFuture™ initiative to reduce our impact on the environment, West Marine has embraced photovoltaic technology. We constructed our own sizable 57,600W array on the roof of our Santa Cruz, CA, store (with 480 panels of 120W each, connected to 24 inverters, rated at 2,100W each, producing enough electricity to meet 70% of the store's electrical needs). According to the EPA, a 57.6W solar power system like West Marine's can eliminate 4.4 million pounds of carbon dioxide that would otherwise be produced by a power plant over 30 years. As a clean, renewable energy source, it can save more than 400 million cubic feet of natural gas over the same 30-year period.

How much energy do you want to generate?

Solar panels charge 12V batteries, and might have a voltage of 20V with no battery in the circuit, but are engineered to provide their power at the voltage a 12V battery requires for full charging.

Panels are measured in either Watts, or Amps, or both. We rate them in Amps, since most boaters have an idea of how many amp-hours their battery capacity is, or how many amp-hours they use in a day while cruising. We also use a simplifying assumption, and that is the panel will put out its maximum output for five hours a day. As they say in the car commercials, “your mileage may vary,” but this rule of thumb works well for estimating a panel’s output.

We arrive at these values by averaging the number of hours the panel spends in full sun (defined as 1000 watts of energy per square meter). Full sun means enough light so you see fairly sharp-edged shadows (most locations get no more than 80 to 85% of full sun). In most of the Continental U. S. the amount of time a panel spends in full sun averages four or five hours per day. 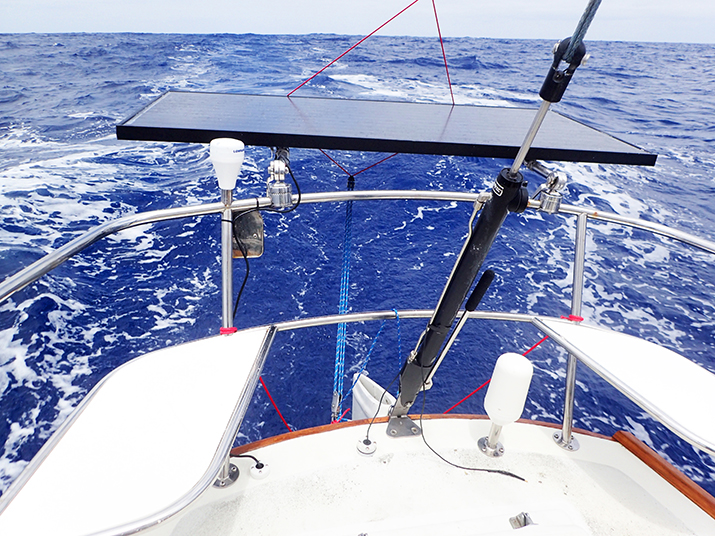 165-watt rigid monocrystalline panel deployed on the author's Cal 40. Using a 225 W solar array to charge my batteries, I only needed to burn seven gallons of diesel fuel on a 2,140-mile race to Kauai.

Shadows covering even a tiny fraction of the panel have a dramatic impact on power output, for crystalline panels only. Shaded cells show a large voltage drop that acts as a barrier to useful power production, and shading a single cell on a panel can cut its output by 20 percent or more. Shading two or more cells effectively turns off the panel until the shadow is removed.

This defect is corrected somewhat by the use of bypass diodes across each cell, which allow the module to produce power even when partially shaded. Pointing the array squarely with the panels perpendicular to the sun makes a large difference in efficiency as well as does the temperature. The colder the temperature at the panel surface, the higher the output. Performance on a clear, cold winter morning can be 30 to 40 percent over rated specs.

Sizing the Panels for Your Battery

Math shortcut: Take the output of the solar panel (in milliamps) and divide it by two. That’s about the size of the battery it can maintain. A 150mA solar panel can maintain a battery up to about 75Ah. The 1500mA panel can provide enough power to keep a large bank of batteries topped off, assuming there are no loads on the batteries other than self-discharge.

Do you need a charge controller?

As a general rule panels that produce less than 1.5 percent of a battery’s rated capacity in amp hours do not require regulation. This means that a 1.5A panel is the largest you should use without a regulator on a 100Ah battery. Regulators should generally be used any time you have two or more large panels connected to your batteries.

If you’re concerned about damaging your new gel or AGM batteries due to overcharging, you can add a small, inexpensive charge controller. These controllers, also called regulators, are rated by the maximum number of amps in your solar array, and we offer versions handling between 7A and 50A. Regulators are ideal if you can’t be onboard to monitor your electrical system, and the top units now feature smart, multi-stage charging.

Larger rigid panels can be permanently mounted in a custom-made bracket, especially when used aboard a cruising vessel. Rollable panels are made for the marine environment, and can be permanently mounted using their corner grommets. They’re also very easy to remove and store compactly. Foldable panels are generally made for temporary use, since they’re less weatherproof than the other types. 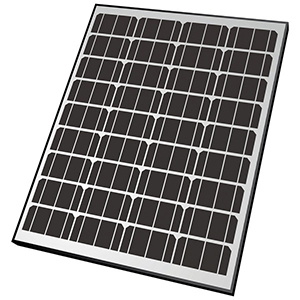 This 90-watt Rigid Monocrystalline Solar Panel is about 34" long and weighs about 15 pounds. Requiring a charge controller, it can generate almost 5 amps under optimum conditions.

Two types of panels use either silicon crystals or thin chemical films to generate electricity.

Mono-crystalline and multi-crystalline (c-Si) panels are the oldest technology and also the most powerful. When sized correctly and matched to appropriate batteries, these are the panels to use for running large DC loads such as lights, a TV, radio or VCR. Our current assortment of this type includes single-crystalline products from Nature Power.

In crystalline panels, silicon, the primary material in quartz sand, is grown into crystals, refined, purified (by an expensive process), sliced into thin wafers and “doped” with the addition of chemicals. Solar cells create electrical current, the quantity determined by the size and efficiency of the cell and the amount of light. Solar modules are created by connecting cells in parallel to increase amperage and in series to increase voltage. Typical solar modules have 30 or 36 cells (generating between 14 and 18V DC).

Amorphous thin film Silicon (a-Si) panels are only about 50 Percent as efficient as multi-crystalline panels, but can be manufactured in flexible forms so they can roll or fold, or conform to the shape of a cabintop. They are more efficient in low or diffused light conditions and are less subject to voltage drops when they heat up.

They’re the panels most often used for low amperage charging and battery maintenance. They don’t generally have enough output for serious energy replenishment, but can be used to “float” or trickle charge a battery.

The PowerFilm solar powered battery chargers represent this type of economical solar cell. Single junction panels of this variety have the fewest number of layers of chemical coatings deposited on their metal plates.

Here is a real-world example of how panels perform under different amounts of light. The following table shows the energy available from PowerFilm’s amorphous panels, such as their Flexible Solar Panels, at various light conditions relative to full sun condition:

Keep the panels as perpendicular to the incoming sun’s rays as possible. We understand that if you’ve mounted panels on a boat on a mooring, you may not be able to guarantee that they are pointing towards the sun, but all panels will produce more power if they get direct sunlight. This is a compelling reason to mount panels on cruising boats so that they can be aimed in the appropriate direction, no matter what the season, course, or latitude.

Avoid shadows: The output of a panel (particularly a crystalline panel) drops dramatically when shadowed, even if only 10 percent of the panel is in shadow. A small shadow can reduce the panel’s output by 50 percent or more. When something as large as a boom, radar scanner, or mast casts its shadow on a panel, your output goes down dramatically.

Keep your panels cool. It’s not easy to keep a black surface cool in the sun, but panel output goes down as temperature rises, so if you can provide some ventilation on the backside of the panel, you may be able to pick up a five or ten percent increase.