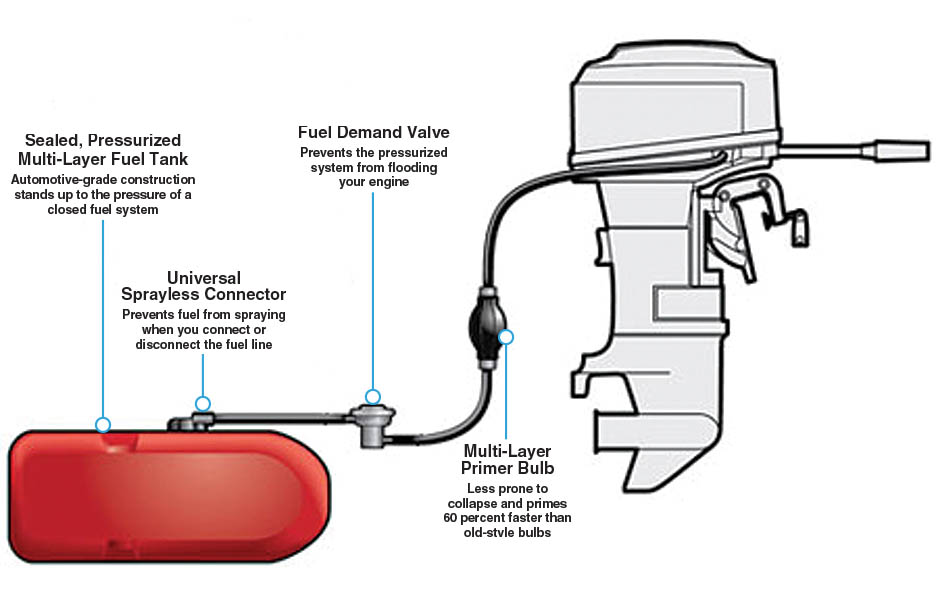 The EPA requires that all portable fuel systems manufactured after January 1, 2011 for use with outboard engines follow a zero-emissions policy, just like the fuel system in your car. Before this change went into effect, fuel tanks were manufactured with a fuel filler cap that vented and released gas vapor into the atmosphere. To meet the new regulations, fuel tanks can no longer be built as an “open” fuel system.

Now that portable fuel tanks must be fully sealed, gas vapor is unable to vent and has nowhere to escape except to your engine through the fuel line. This builds up pressure within the fuel tank, and puts your engine at risk of flooding. If you need to replace the vented tank of your existing fuel system with one of the new sealed tanks, you'll need to add some additional components to your system in order to prevent hazardous fuel spills and possible engine damage. 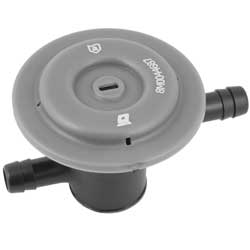 New fuel tanks, designed to meet the EPA’s fuel vapor emissions standards, no longer have an open vent built-in to the filler cap. In addition, they are made from a material with high resistance to fuel permeation through the tank walls. While this is beneficial to the environment, it creates some new issues for your fuel system.

First, because the tank is effectively sealed, pressure can build up inside it. This can result in visible swelling or bulging of the tank. While this is normal, and the tanks are designed to accommodate the expansion without damage, it does mean that they need to have enough space to accommodate this physical expansion in their mounting location. The buildup of pressure within the tank creates some additional issues which require the use of a pressure-regulating Fuel Demand Valve (FDV), to prevent engine flooding, and EPA-Approved Sprayless Connectors, to prevent fuel from being sprayed when the fuel lines are disconnected from the engine.

The Fuel Demand Valve (FDV) installs on the fuel hose between the fuel tank and primer bulb, and prevents fuel from flowing unless there is demand from the engine. This prevents fuel from being forced through the fuel line by pressure in the tank and avoids causing engine failure due to fuel flooding. 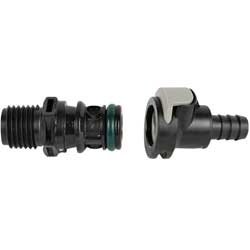 Sprayless fittings eliminate the hazard and mess of fuel spraying about when connecting or disconnecting the fuel hose from the tank.

The Fuel Demand Valve has a manual release which can be used (pushed in) to bypass the valve in case of a fuel blockage in the valve. Our EPA-certified Fuel Demand Valve is compatible with all new fuel tanks, no matter what brand. The FDVs are available both individually and as part of a complete fuel line assembly.

Sprayless Connectors have built-in check valves that instantly close when disconnected to prevent pressurized fuel from being sprayed. The check valves will automatically seal if ever subjected to impact or damage, or if they're accidentlly ripped apart. Because of the pressure of the new fuel tanks, the threaded connections of Sprayless Connectors should not be sealed with standard white thread seal tape, which can disintegrate into tiny pieces that may find their way into your engine. Instead, we recommend the use of Permatex Aviation Form-A-Gasket or special thread seal tape meant for use with gasoline and other petroleum products. West Marine offers both options.

What are the benefits of the new fuel systems?

EPA-compliant fuel tanks, FDV valves, fuel lines and fuel fittings are unfortunately, more expensive than the components of the old portable fuel systems. However, when properly installed and maintained, a new “sealed” fuel system prevents harmful fuel and fuel vapor from being released into the atmosphere and into the waters where you boat.