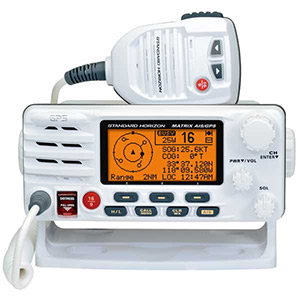 The Standard Horizon GX2200 combines a VHF radio with a GPS receiver so you don’t need to connect with an external GPS sensor or chartplotter.

Emergency on the Water

It could happen to you. Any boater could face a sudden Mayday situation caused by a fire, a collision, a capsizing/sinking boat, or medical emergency. If this happens, it’s good to know that the Coast Guard and other Search and Rescue responders are equipped with Rescue 21 technology, an advanced radio and communications system that, as of 2017, covered 95,000 miles of coastline, navigable rivers and waterways in the continental United States, Alaska, Hawaii, Guam, and Puerto Rico. Remote sites in Alaska and along the Western Rivers were scheduled to receive modified Rescue 21 coverage by 2017, according to the Coast Guard.

Just push and hold down the red DISTRESS button on your VHF radio, and it sends an automated digital distress message to the Coast Guard and all other DSC radio-equipped vessels. Rescuers instantly know who you are, where you are (using GPS coordinates), the name of your boat and the phone numbers of your emergency contacts.

To reap the benefits of Rescue 21 and DSC technology, mariners must:

This is an epidemic problem as ninety percent of boaters who call the Coast Guard for emergency help have not both registered and interconnected their VHF radios, meaning that our 21st Century safety network will not work.

According to Coast Guard Rear Admiral R.E. Day, “Of the roughly 100 digital selective calling distress alerts we are now receiving each month, approximately nine out of 10 do not have position information (i.e., do not have a GPS navigation receiver interconnected to their DSC-equipped VHF radio), and approximately six out of 10 have not registered their MMSI. Despite the promises DSC technology offers in significantly reducing the alerting and search time for mariners in distress, there’s little a Coast Guard watchstander can do after receiving a distress alert with no position information, using an unregistered MMSI, and having no follow-up voice communications.”

The Coast Guard must respond to about 60,000 emergency calls each year (while saving nearly 5,000 lives annually) using limited resources. Unfortunately, search and rescue responses are often suspended when rescuers cannot establish further communication with the distressed boater, have no position information or bearings for the vessel, and have no other means of contact.

Boaters, please help the Coast Guard help you, and take these two quick actions to enable the safety features of your modern VHF radio.