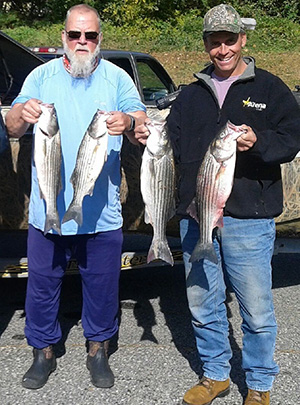 Every year droves of boaters ply the waters of the Upper Chesapeake Bay in hopes of catching striped bass or “rockfish” as they are known in this neck of the woods. Here are some pointers on how to catch rockfish, including what gear to use and angling techniques.

Rockfish are a schooling fish native to the Atlantic coast. They are often found in areas with tidal and current flows and in proximity to breaking waves along a coast. Rockfish subsist on a wide variety of food and because of this will accept a wide variety of natural bait, including bloodworms, shad, herring, eels and clams. They will also hit a variety of artificial lures, a few of which are mentioned below.

As of this writing, the IGFA All-Tackle Record for the largest rockfish ever caught is an 81-pound, 14-ounce leviathan bagged by Greg Myerson when drifting a live eel off the coast of Westbrook, Connecticut. The Maryland state record for Chesapeake Bay is a 67-pound, 8-ounce behemoth caught off Bloody Point by Devin Nolan on May 13, 1995. It’s great to know that these monsters exist—however, for the Upper Chesapeake you can normally expect fish weighing 4-8 pounds in the 20”-24” range. That's not to say you might not tie into one of those swimming submarines—which is why we fish, right? Rockfish in the Upper Chesapeake offer plenty of fight, can be caught by a variety of means and are great to eat! 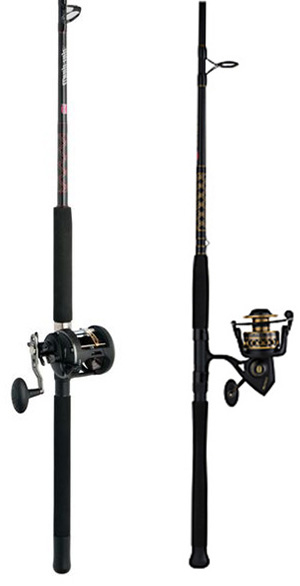 Examples of a level-wind combo (left) and a spin-fishing combo (right).

Before venturing out for rockfish, it is important to know the regulations—which can be complex. For example, the minimum legal size for rockfish varies with the time of year. Along with the fact that “open” and “closed” seasons vary by area, it is important to remember that “open season” in an area can suddenly close at any time. Other regulations can change such as the rules governing hooks, which were updated in 2018. Infractions can result in hefty fines, so “know before you go.” When planning a trip, I tell anglers to go online and check the Maryland or Virginia regulations for the area they plan to fish.

The majority of boaters on the Upper Chesapeake prefer trolling for rockfish. The most popular trolling rig is a medium- to medium-heavy-action, conventional or level-wind combo. Examples of popular combos that are used include (in order of price) the entry-level Penn 309 combo, Penn Warfare combo and the top-of-the-line Penn Squall combo. The best rod-reel combo for you depends on your overall budget and how frequently you fish.

Live-lining or fishing cut bait with a spinning rod/reel combo is another option. I suggest a medium- to medium-heavy-action “balanced” combo with a 6 1/2- to 7-foot rod. Examples include Penn Fierce, Penn Battle and Penn Spinfisher combos. Again, when making your decision, let your budget and how often you plan to fish be your guide.

Rockfish are often found chasing baitfish, so when scouting an area, be on the lookout for diving birds and baitfish breaking the water.

When trolling, umbrella rigs get results.

When trolling for rockfish, umbrella rigs are oftentimes the hot ticket. Popular brands include BFG and Rockfish Candy. Depending on the season you are fishing, the best weight for the umbrella rig will vary from 4 up to 14 ounces. Trolling with Rat-L-Traps® can be deadly as well. Boat speed is critical. Use your electronics to try and match the speed of the boat to the depth of the fish. You may even have to throw out a bucket with some holes in it or a drogue to slow down the boat.

Casting topwater lures can pay off big. Examples include Whopper Ploppers, which are relatively new to the market but have taken off in popularity and Chugbugs which have provided many a striper with a one-way ticket to a boat. These lures are great for fishing around rock formations near schooling fish. It is an awesome sight to see a rockfish smash a topwater bait! Jigging can produce plenty of action. I suggest heavy jig heads with plastic bodies and crippled herring.

Chugbug topwater lures have provided many rockfish with a one-way ride to the boat.

If you are a fish eater, you most likely will enjoy Rockfish. Rockfish can be prepared by a variety of means, including grilling, poaching, baking or frying. The succulent meat is firm and white and holds together on a grill—however, I prefer to bake my rockfish in an oven with some butter and Old Bay Seasoning. Wow, it's about time to get out on the water and catch some more!