How to Select a Regulator/Octopus 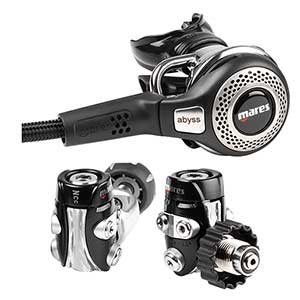 A regulator enables you to breathe from a tank of compressed air. It is a major mechanical part of dive gear that connects many pieces together like your tank, BCD, gauges and breathing apparatus. The key to a good regulator is breathing safely and with ease so you feel like you’re just another fish swimming underwater. Consider the following when selecting a Regulator/Octopus:

What type of first stage connection (DIN vs. Yoke) and how many ports are available?

The first stage component connects to your tank and is the first location air is depressurized in order to breathe. There are two different types of first stage connections: DIN (Deutsche Industrie Norm) and yoke. A DIN first stage screws into the tank, works with pressure more than 3,000 psi (pounds per square inch), has an O-ring in the regulator and is more often used for technical diving. A yoke first stage clamps to the tank, the O-ring is in the fitting on the outside of the tank (if you are renting tanks, make sure the O-ring isn’t rotted) and is more commonly used in recreational diving. The first stage includes many ports meant for attaching pressure gauges, dive consoles, primary and secondary air sources and buoyancy compensator device inflator hoses.

What are the Primary (Regulator) second stage functions?

The second stage is the next location where air is depressurized to breathe. This is your primary air source, called a regulator, which has a mouthpiece that should fit comfortably to reduce jaw fatigue. A regulator delivers air at the right pressure no matter your depth. An advanced feature on some regulators allow a diver to manually adjust the air pressure to fine-tune breathing and prevent free-flow of air. Regulators also include a purge valve to get rid of moisture build-up and prevent the backflow of water into the device. The Mares 12S Regulator is designed with an oversized purge button so it’s easy to purge moisture even if you’re wearing cumbersome dive gloves. Ergonomical models like the Mares Instinct 12S Regulator include exhaust valves that channel air down your sides so the bubbles will not block your field of vision. 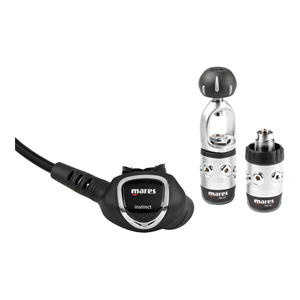 The Instinct 12S second stage regulator's ergonomical and minimalist design sits naturally in the diver's mouth and keeps the field of vision clear.

What are the Alternate (Octopus) second stage functions?

An octopus is also a second stage device that acts as a backup breathing apparatus in case the primary fails or if your dive buddy needs emergency air. Most octopi are brightly colored so you can spot and access them if assisting another diver is necessary. Mares Octopus MV is symmetrical making it easy for someone to use on the right or left. Most Buoyancy Compensator Devices (BCD) have a strap to keep the octopus close by.

What are the functions and type of gauges that connect to the first stage?

Submersible pressure gauges connect to the first stage via a high-pressure hose and tell you how much psi are left and warns you if they are too low, which is usually 500 psi or less. Depth gauges also attach to the first stage and let you know how deep you have gone and your current depth. Pressure gauges can be used with a dive watch to monitor dive bottom time, which determines decompression times to prevent getting sick.

What is the function of the low-pressure hose?