A One-person Alternative to the Typical Bosun’s Chair 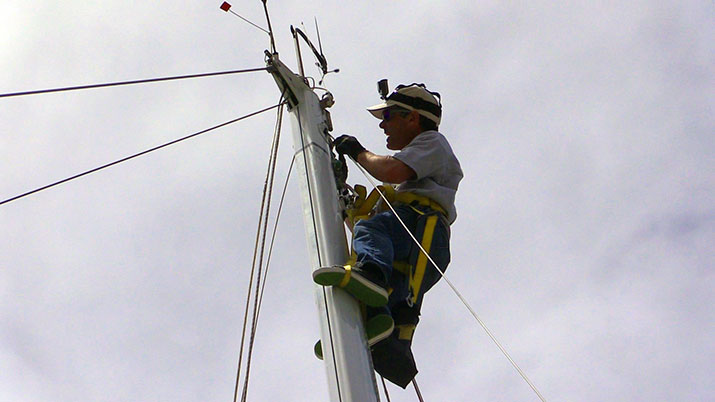 The Mastclimber allows West Marine Rigging’s Mark Chandler to climb this 50' mast and lubricate its rod rigging. Mark often works on Customers’ boats by himself using this climbing technology. 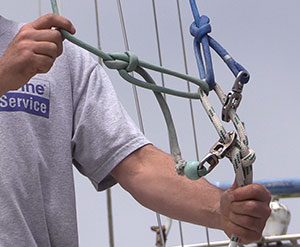 Don’t depend on shackles or splices. Attach both halyards with bowline knots, as shown.

The ATN Mastclimber is a marinized version of a common rock-climbing device that allows one person to safely climb a sailboat’s mast. It’s standard gear for professional rigging techs, like Mark Chandler, West Marine Rigging’s OEM Rigging Manager and Grand Prix Specialist. In this article, Mark explains how to use this unique product.

The Mastclimber employs two one-way jammers, allowing you to “inch-worm” your way up the mast. You alternate between pushing on its leg straps and sitting on the integrated bosun’s chair.

Mastclimber allows a lone sailor to work on your rig by yourself. It’s a little slower than a bosun’s chair or a block and tackle system, the two other most common mast climbing methods.

The other downside is that a Mastclimber is more physically demanding for the climber, although it relies on your large leg muscles and doesn’t require lots of upper body strength. A safety feature is that if you suffered an accident while aloft in the rig and became incapacitated, a support person on the boat below could ease the halyards and lower you to the deck. 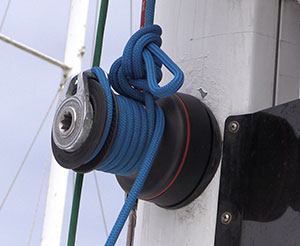 Just in case someone comes by and tries to remove your halyards from the winches, you should tie them as shown. Tie both the primary and secondary halyard the same way.

When Mark works on a Customer’s boat, he brings his own hoisting rope, low-stretch T900 Technora-Dyneema line, and hooks it to two halyards, so he can climb all the way to the top of the mast. Using two halyards instead of just one provides a redundant safety backup. He always ties bowline knots, never trusting shackles or splices (even his own).

If our rigging pro has any doubts about one of the two halyards, he brings his own halyard and temporarily installs it, swapping out the suspect line.

Tie your Halyard to the Winch

When the halyards are hoisted to the masthead, Mark ties them around the winches as shown at right. If some clueless person should walk up to the boat and decide to remove the halyard from the winch, this method, used for both halyards, would hopefully prevent a catastrophe.

Tying Off the Bottom 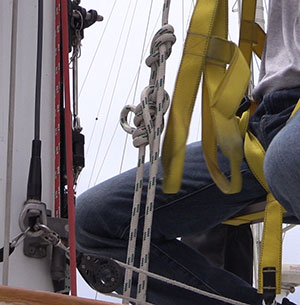 Here’s how to tie off the bottom of the hoisting line. This purchase lets you apply as much tension as you need. The line is secured to a strong pad eye on deck.

Standard practice is to tie off the bottom of the hoisting line, which allows a more controlled climb where you’re not wobbling all over the place. This helps the one-way jammers work their best. The downside is that you’re not as free to move out to the ends of spreaders. However, you can solve this problem with a helper below who can loosen the bottom of the line when required, and tighten it back again after you’re finished inspecting spreader tips and want to move up or down.

Before you go up, aggressively bounce-test your setup, as shown in the photo. Be careful to keep your weight centered over your feet, so if the system lets go, you won’t fall hard on your rear end. This shock loading will ensure your safety, and also take some of the stretch out of the halyards. The time to break any components, like halyards, bolts holding a winch, or the axle of a sheave at the masthead, is right now!

Now You Are Ready to Climb

The Mastclimber is easier to operate than it is to explain! Going up involves straightening your legs and standing up in the leg straps, sliding up the one-way jammer of the bosun’s chair (the upper one), then sitting onto the bosun’s chair, which allows you to slide up the one-way jammer of the leg straps (the lower one), then standing up again in the leg straps. You “inch worm” your way up the rope. To descend the mast, you just reverse the procedure. 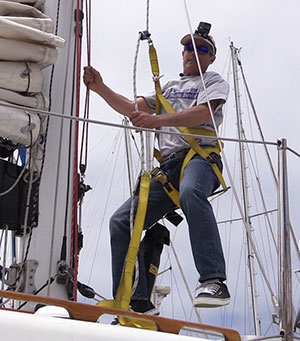 Here Mark jumps up and down in a vigorous yet controlled way. After his bounce test, he is confident that he can safely ascend to the masthead.

When using this device, you hold yourself away from the mast using your shoes. It helps to wear a pair of shoes with grippy soles that won’t mar the surface of the mast. Mark also wears a pair of Boss Tech™ Gloves. Rigging components way up the mast and beyond the reach of any water hose tend to be very dirty.

If you have helpers on deck, they should not stand under where you’re working. That way, you won’t accidentally drop a tool on someone’s head. You should also only climb your rig with the boat in the water, never when it is hauled out on jack stands.

You can ascend with the boat offshore, as solo racers in the Vendee Globe race have sometimes needed to do. Mark has climbed rigs as tall as a 110’ maxi-boat rig, but in ocean races he goes up using a rock climbing harness. With a big racing crew onboard, climbing the rig is usually a quick operation. The team has a limited task to perform, and gets him up and back in a hurry. 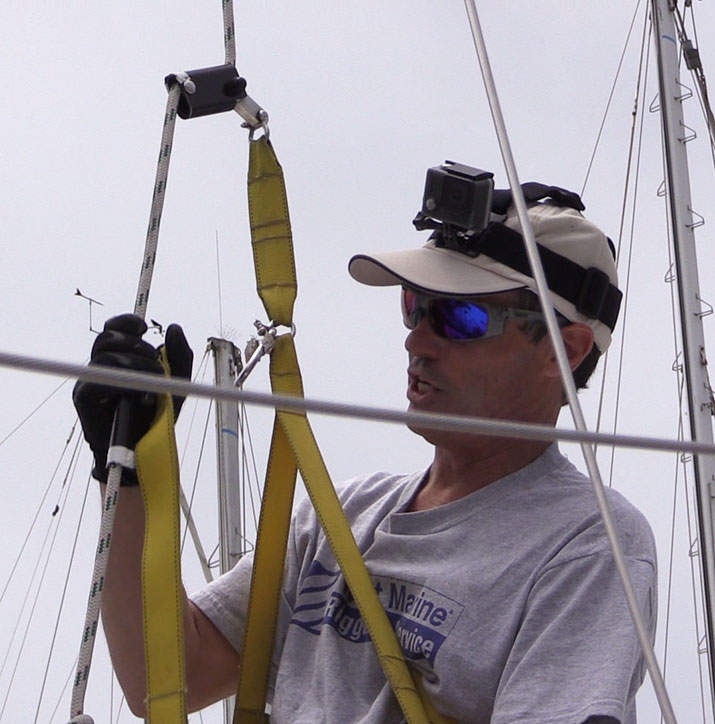 The jammers slide up until they have load on them, then they hold. To go down, you have to compress the jammer, which unlocks it, and then you can slide it down. 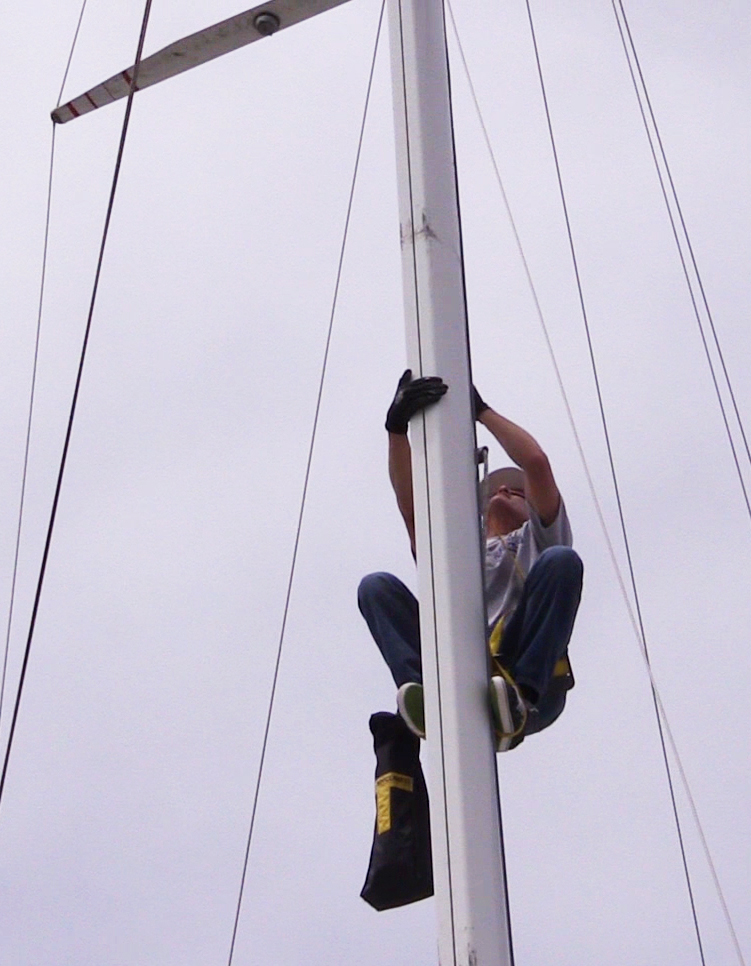 With rubber-soled Zhik ZKG deck shoes for a good grip and rubber gloves, Mark has great control of his climb. He can grab the lower shrouds for added stability. 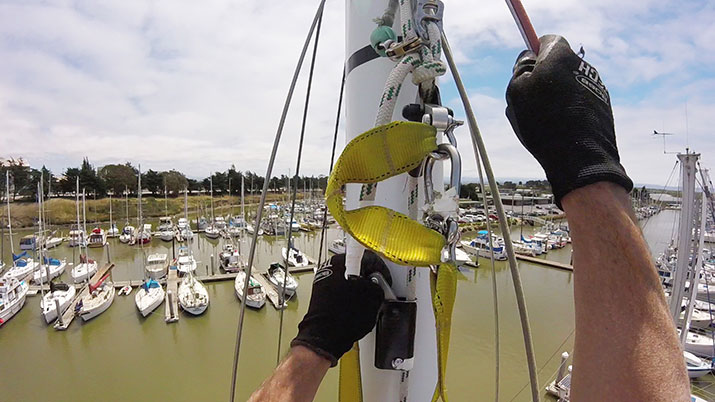 When you get to the top of the mast, you can connect a carabiner that’s part of the harness to the upper jammer to raise yourself to masthead level. The photo at the top of this article shows Mark suspended this way. 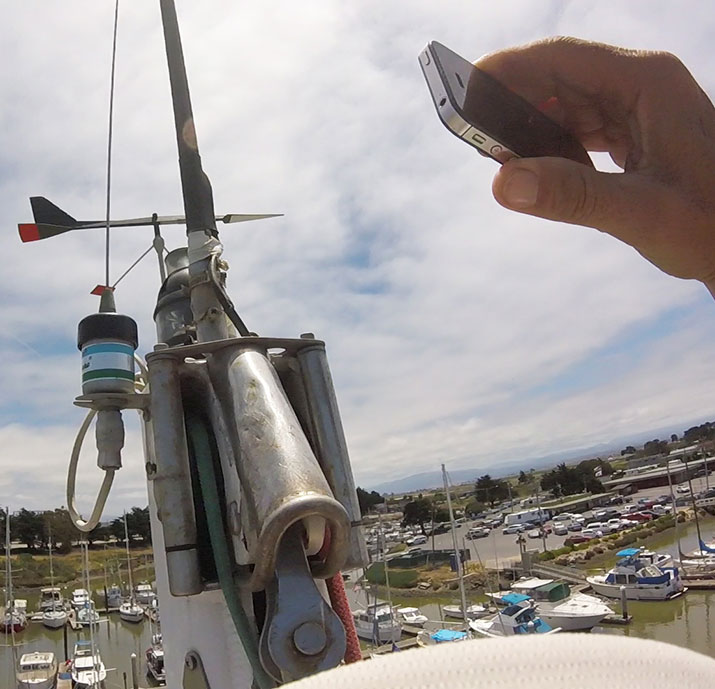 Bring your smartphone to document the condition of the components. You’ll also be able to impress your friends on Facebook or Twitter!

Mark carries all of his tools and gear in the Mastclimber bag, in this case metal polish, a rag, a long tape measure, rigging tape or electrical tape, Tef Gel® and a brush.