Maximum Working Load (MWL) is the load at which a block, line or other piece of gear will happily function without excessive friction or permanent deformation. It is usually one half of the fitting’s breaking load or breaking strength, the load at or around which you can expect a major failure of some part of its structure. 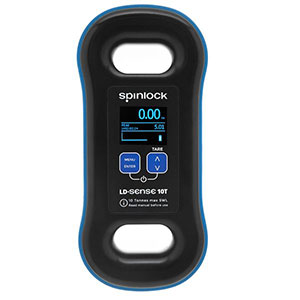 This Single Safety Tether has stitching that shows yuou when the tether's Maximum Working Load has been exceeded, for example from a hard fall on deck.

Above MWL, balls may flatten or pit, sheaves may seize and the shackle may begin to distort. Never exceed the fitting’s MWL with either static or dynamic forces, keeping in mind the purchase, the angle of the load, and the rope load.

If you want to get a better idea if you’re OK, you can connect one of Spinlock’s new Load Cells, and determine a numerical value (which of course may fluctuate, such as during a jibe). This is useful info onboard a big racing boat, where loads are often huge.

When selecting blocks there are a lot of different things to consider such as the total load, the acceptable amount of friction, and the bulk or size of the system. An example is using Ronstan’s Series 20 blocks versus Harken’s 40mm Carbo Airblock. The MWL of the blocks is essentially the same, but the Harken block is twice the size of the Ronstan, costs more than twice as much, but since larger diameter almost always translates into less friction an argument could be made either way, it just depends on the application.

Other Articles and Videos on Running and Standing Rigging

How To Correctly Coil Rope

Removing a Halyard from your Mast

When and How to Replace Your Lifelines