Over the past decade, fuel-related issues, particularly the widespread use of ethanol blended fuels, have been a source of concern and headaches for lots of boat owners. Since ethanol acts as a solvent, many boaters experienced problems with clogged fuel systems and other issues that threatened the reliability of previously trouble-free boats. Thankfully, most boats have now been running ethanol-blended fuels long enough to have overcome most of the initial problems, albeit with the need for a lot of tank cleanings, fuel line replacements and new filters along the way.

One result of the change to ethanol-blended fuels has been the installation of more comprehensive fuel filtration systems aboard many gasoline-powered boats. This kind of “multi-stage” fuel filtration has been standard practice on diesel engine installations for many years, but is now quite sensibly being adopted by many gasoline outboard and sterndrive powered boat owners to prevent fuel-related reliability issues. 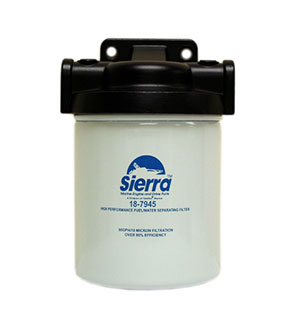 We feel that adding a 10-micron fuel filter/water separator upstream of the filter at the engine is good way to help reduce the contaminants that might load up the stock fuel filter—many of which filter in the two micron range. Adding this filter becomes especially important in regard to modern EFI (Electronic Fuel Injection) and DFI (Direct Fuel Injection) engines, which as John Tiger points out in a June/July 2014 article for BoatUS, “. . .are more prone to problems when fuel quality goes down. Two concerns in particular tend to crop up. First, fuel hoses, connectors, injector pintles and tips, as well as carburetor parts like floats, fuel inlet needles, and rubber/plastic parts, are highly susceptible to corrosion and degradation when exposed to alcohol-extended fuels.”

Once installed, the 10-micron filter becomes the primary filter—your first line of defense against water and debris entering the system, with the stock fuel filter at your engine working in a secondary role to catch any debris (under 10-micron) that make it by the first.

Although adding a 10-micron filter will increase the time duration between required filter changes, however, this should not be an excuse for deferred maintenance, which should be performed at regulary scheduled intervals.

Will Adding a Filter Restrict the Flow of Fuel to the Engine?

The answer to this question is yes, but in most situations, the restriction is negligible, provided you do not have a marginal flow situation to begin with—which should not be the case if your fuel system is properly designed and maintained. Factors that can contribute to inadequate flow include undersized fuel hoses, restrictive diverter valves and fittings, excessive lift requirements (how far “uphill” the fuel must be pumped), and blockages due to fuel line kinks or sediment or debris in the fuel line or at the pickup in the fuel tank.

Some of Racor’s Spin-On Series filters include a built-in pump. For outboards, this eliminates the need for an in-line primer bulb. 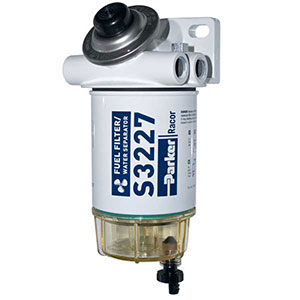 What Micron Rating is Best?

How to Install a Fuel Filter

To complete an installation, here is what you need:

Purchase the correct kit for your application.

Outboard gasoline motors can use one of Racor’s Spin-On Series with the clear sight bowl and petcock style drain. A disposable filter, without a sight bowl, such as one by Sierra can also be installed.

Inboard gasoline motors per ABYC regulations cannot use a filter with a clear sight bowl. Instead, use one of the Racor Spin-On Series with an aluminum bowl or one of the disposable filters by Sierra.

First things first. Shut off the fuel valve at the tank. Cut the fuel hose at the mounting location and carefully drain the contents, or plug the hose openings by inserting bolts and sealing with hose clamps.

For an outboard, install the flange (filter head) level and above the bilge, between the primer bulb and the engine. For outboard installations, if your boat is designed with an engine well, this might be the best location, to keep the filter easy to access, yet out of the way. For inboards, install the flange between the tank and the engine. Hoses should not have any kinks or tight turns. Use stainless steel self-tapping screws, or if feasible, thru-bolt. If the installation must be up against the boat’s hull, epoxy a piece of plywood in place, and seal all exposed surfaces on the mounting block with epoxy, allow to dry and paint over. After the paint is dry, drill, and mount the flange with self-tapping, stainless steel screws. Coating the screws with silicone sealant will help to limit galvanic corrosion between the stainless steel screws and the aluminum filter head.

Install the NPT hose fittings into the filter head. Do not use sealing tape, as the possibility exists that some of the tape may enter the system as debris. Instead use a thread sealer appropriate for fuel applications. Then swab some motor oil on to the filter gasket and onto the O-ring for the sight bowl (if the filter has one) and assemble onto the filter head.

Push the fuel hoses onto the “in” and “out” filter ports. Double clamp, (or single clamp if two clamps don’t fit) turning the screws until the rubber just begins to swell on either side of the clamps. Start the engine, run at a fast idle and check for leaks.

NOTE: If you need to replace your fuel hoses as part of this installation, make sure they are type A1-15, which is compatible with E10 fuel and meets EPA standards for ultra-low permeation.

How to Select a Fuel Filter