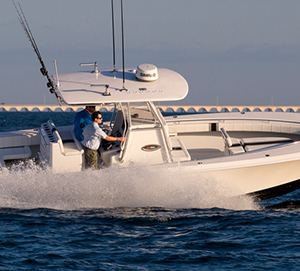 The right radar can keep you safe and aware on the water.

Modern open array and compact dome radars may look familiar, but the elegant engineering involved in making them is advanced, and it offers some tangible benefits for the boater who uses one.

This technology has been called solid-state radar, broadband radar, Frequency Modulated Continuous Wave (FMCW), pulse compression radar and CHIRP. Yes, there are subtle variations among these products, but for the purposes of this West Advisor, I am referring to all of these radar units as solid-state radar.

Even if you aren't interested in the specific technical aspects, solid-state radar offers the following advantages:

Raymarine’s Quantum Radome easily picks out a navigation marker near the bow of this boat.

How a Pulse Radar Works

To understand what’s new in radar, we’ll take a quick look at the “old school” radars of the past. The heart of these radar units is a device called a magnetron, a vacuum tube that emits an extremely brief, powerful pulse of microwave radiation, 4,000 Watts or more. A relatively cheap technology dating from World War II, the magnetron also powers the microwave oven that heats your food in the kitchen.

Although a magnetron works great for heating leftovers, it’s an inefficient machine when employed in a radar, splattering its energy across the frequency spectrum in an unstable pattern that changes from pulse to pulse. This method of generating several kilowatts of pulsed energy has to be coupled with a relatively wide-bandwidth receiver. This allows too much background noise to mask the weak signals from return echoes, so the quality of the image is inherently limited by the technology. Modern pulse radars, often tagged with “HD” or “Digital” as part of the product name, use high-definition digital processing to clean up the signal, but the problems with old, analog magnetron technology remain.

Transmitting one percent of the time, the radar waits for a return echo and then precisely measures how much time passes before it receives the energy reflected from the target. Pulse radars use time to measure distance, and the direction the radar array is aimed at the time of transmission to measure bearing. 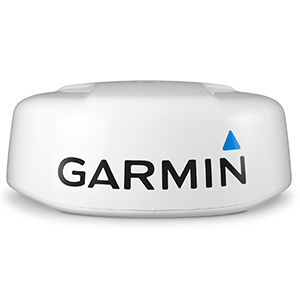 Solid-state radars eliminate the magnetron and replace it with a solid-state, broadband transmitter that outputs a clean, frequency-stable signal. It’s coupled to a receiver dialed into a more precise band of frequencies, which eliminates much of the background noise that would mask the faint echoes from a target.

Solid-state radars also transmit at a very low power level, a few Watts or less compared to kilowatts for traditional radar, yet they place more energy on the targets and generate sharper returns. How is this possible? That’s where the second advance in post-magnetron technology distinguishes these new radars.

Instead of transmitting a single output pulse, solid-state radar transmits a continuous wave of ascending frequency, a Frequency Modulated Continuous Wave (FMCW). The technology, long used in military radar and recently available for commercial use, is roughly similar to CHIRP sonar. Solid-state, broadband radar sends a continuous transmission wave with linear increasing frequency (hence the term broadband). The wave retains its frequency as it travels out and reflects back from objects. Meanwhile, the transmitter continues to output an increasing frequency. It transmits for roughly ten times as long as a conventional pulse radar, which helps explain how a solid-state, broadband radar transmits more energy onto a target and achieves a sharper return.

The difference between the currently transmitted and received frequencies, coupled with the known rate of frequency increase, is how these radars precisely calculate a “time of flight” and target distance. Since FMCW constantly builds up radar return energy (vs. a single “main bang” transmitted by a pulse radar), this system provides target detection superior to pulse radars while transmitting at far lower energy levels.

What are your solid-state radar choices?

If you’re considering purchasing one of these solid-state radar units, you have a few options to consider installing on your boat. One way to narrow down your choice is to consider which brand of electronics you prefer, as these radars are built to work best with selected same-brand multifunction displays. Garmin’s Fantom™ dome and open array radar work with their GPSMAP Series displays. Simrad's Halo radomes work with their NSS and NSO displays, among others. The second question concerns whether you want a radome or an open array. If you need help in answering this question, see our West Advisor called Marine Radar for the Recreational Boater. 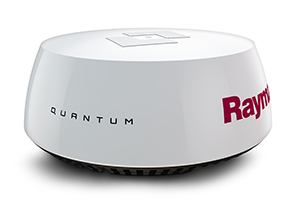 Sold-state radomes are available from Raymarine, Simrad, B&G, Lowrance and Garmin. Raymarine’s Quantum radome is a 24-mile radar, compatible with their Axiom series. Installation is simplified with an option for wireless Wi-Fi chartplotter connection to one of their LightHouse II powered displays (some versions also have the option of a wired Ethernet connection). Raymarine calls it a CHIRP pulse compression radar. Simrad, B&G and Lowrance all offer the HALO 20+ series, which have a similar setup using compatible displays and a range for 2–36nm. Garmin's Fantom series are available in 18" and 24" pulse compression dome radars as well and connect with GPSMAP displays.

Simrad’s HALO open array comes in 3' (48 nm), 4' (64 nm) and 6' (72 nm) array widths. These radars can transmit one short, low-power pulse and five CHIRPs in a burst with a repetition rate of 500–2000Hz, and then stitch together all of the ranges captured by these six halo-like rings. The pulse transmission illuminates the inner range of 300' to 1/4 mile. The first CHIRP is the shortest in duration, and covers the next closest range. As the CHIRPs increase in length, they penetrate farther, but have a larger dead zone inside the minimum range, so each CHIRP covers the dead zone of the next longer CHIRP.

Halo uses beam sharpening for improved target separation, like their Broadband G4 radome, and operates with dual ranges simultaneously from 300' to 72 nm. It has several other amazing capabilities for your consideration including the cool visual bling of blue LED accent lighting. 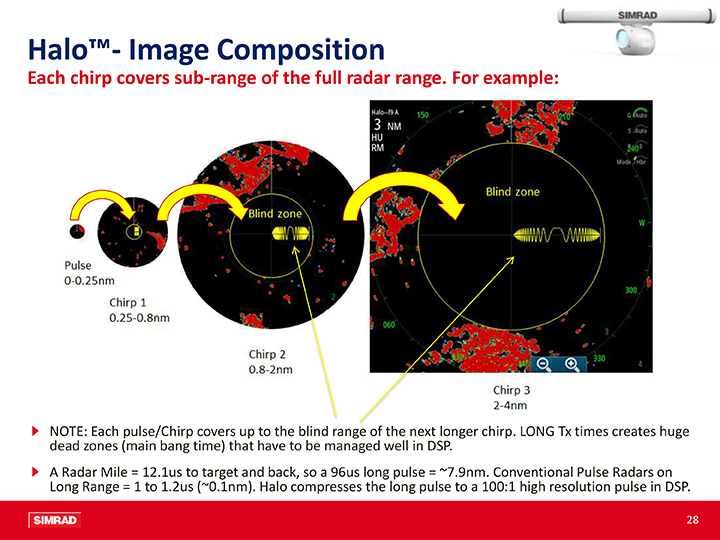 This graphic explains a little about how the Halo™ Radar works. For all the details, download the Halo Product Brief.

Garmin’s Fantom™ radar is available in 4' and 6' array sizes, both rated at a 72 nm range (but given the curvature of the Earth, the effective distance that an objected can be detected is much shorter). Fantom™ uses the Doppler effect, which Garmin calls MotionScope™ Technology, to detect and highlight moving targets, such as small, fast vessels headed your way, flocks of birds or weather cells. Fantom radar uses both pulse compression and pulse expansion.

There’s a lot of leading-edge technology in all of these radars and these devices are a big step forward compared to conventional magnetron-powered pulse radar.