What is galvanic corrosion?

Galvanic corrosion (sometimes erroneously called electrolysis) can damage or destroy underwater metal parts of boats, dock hardware and other equipment. When dissimilar metals touch each other or are electrically connected by a conductor and are immersed in an electrolyte (an electrically conductive fluid, like saltwater) an electro-chemical reaction can occur. One of the metals (the “least noble” metal, called the anode) will corrode faster than it normally would, and the other (the “most noble” metal, or the cathode) will dissolve more slowly.

The seawater Galvanic Sequence lists metals in order, based on their voltage potential and tendency to corrode. More active metals, the faster-dissolving anodes, are at the top of the series. Passive metals, the cathodes, are located at the bottom. Your boat might have a collection of submerged, electrically-connected metal parts immersed in salt water surrounding the boat, in bilgewater or the water in the engine cooling system.


How to Prevent Galvanic Corrosion 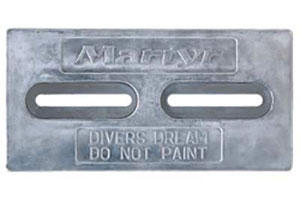 When to Replace an Anode

The effectiveness of an anode depends on a good electrical connection, and is directly proportional to its surface area. As it corrodes away its surface area and effectiveness diminishes. Some manufacturers suggest replacing anodes when they are two thirds gone, but we recommend replacing them when half-eroded or half-dissolved. If an anode is allowed to dissolve completely, the next least noble piece of metal in the circuit will start to dissolve. And that might be a part of your engine. Remember that polluted water, warm water temperatures and stray current corrosion can cause your anodes to wear away at an accelerated rate, and it’s smart to check them regularly.

The Importance of Marine-Grade Fasteners

Galvanic corrosion can also happen in a single piece of hardware, particularly alloys, which contain more than one metal. Interactions between the differing metals in the alloy will dissolve the least noble, the most common example of this being the dissolution of zinc from many zinc/copper alloys (such as brass and some bronzes) leaving a weak, spongy copper residue. That’s why it’s so important to use marine-grade fasteners (bronze, monel and 316 stainless steel) in underwater applications so they are not destroyed, allowing a hose clamp to fail or your propeller to fall off. The higher the salinity and temperature of the water, the greater the likelihood of corrosion. 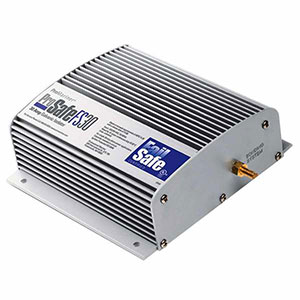 Galvanic isolators protect your boat from stray electrical current caused by improperly-polarized wiring in marinas and on other people’s boats.

Attaching anodes protects the metal parts of the boat from onboard sources of electrical current. Unfortunately, other boats and improper shoreside wiring are sources of galvanic current originating outside the boat. If your boat is hooked to shore power, a galvanic isolator or isolation transformer will protect it from rapid dissolution of your anodes and the corrosion that will follow.

Getting Rid of Cadmium and Zinc

Zinc and cadmium are elements used in traditional salt-water anodes that are suspected of causing environmental damage. CMP Global, our primary supplier, has re-formulated their product, removing these alloys for safer and more “green” anodes. The alloy components of the new Martyr II (Cadmium Free) anode do not include cadmium (one of six substances banned by the European Union’s Restriction on Hazardous Substances directive) and contain a fraction of the zinc used in making the traditional zinc anode (concentrations of zinc as low as two parts-per-million adversely affects the amount of oxygen that fish can carry in their blood). The two Martyr II components, aluminum and indium, are considered non-toxic. A rare bit of good news for the boater: these new formulations actually work better! They’re lighter and last longer, so they’re a plus for your boat and for the underwater life in your marina.

Which anode is right for you?

Zinc for aluminum or salt water: If you are a saltwater boater, you should install zinc or aluminum anodes to prevent galvanic corrosion on the engine and underwater parts of your boat.

Aluminum for brackish water: More active than zinc, aluminum anodes are a good compromise where fresh and salt water mix, such as the brackish water of river deltas, or if you use your boat in a variety of water types. Zinc is too passive for brackish water, where it gets covered in a zinc oxide film and becomes inactive. Magnesium corrodes too rapidly (due to the water’s salt content), leaving your boat without adequate protection.