I have been hunting Lingcod for several years and have gotten to know them quite well. I refer to Lingcod as the “pit bull of the Pacific”. These fish are mottled and sometimes colored a brilliant turquoise blue. Scientists are baffled as to the unique color and what causes the different coloring among the species. Lingcod is a type of Rockfish and is a member of the Greenling family and native to the North American West Coast. Although it is not the prettiest fish, it is a delicious eating fish.

Lingcods have a mouth full of razor-sharp teeth, and even the gills have bony, sharp protrusions that make it necessary to handle with care once you land the fish on your boat. They are tenacious and will often refuse to release the bait, even if they are not well hooked. Often times they will hit a smaller fish that is being reeled in and chase it to the surface. 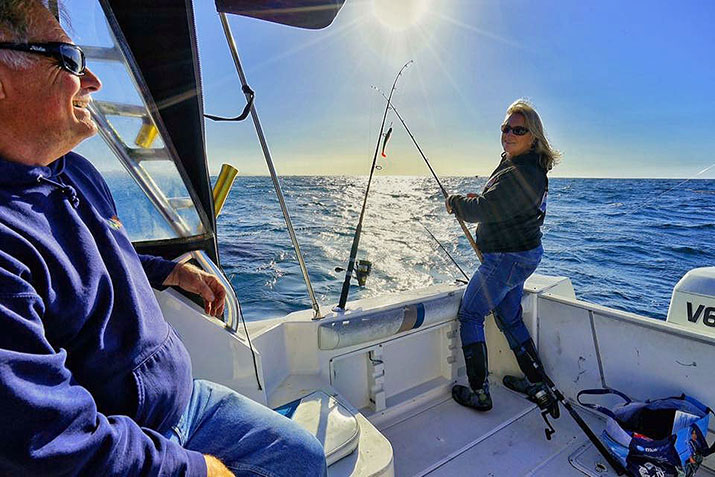 Anyone who knows Sharon knows that she loves to fish - anytime, anywhere and for any species! 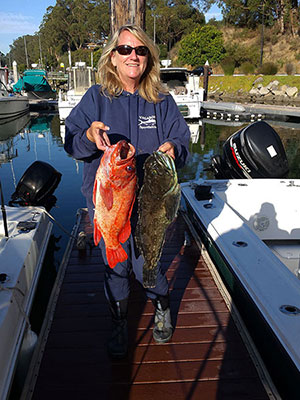 Vermilion Rock Fish (at left) and Lingcod (at right) are frequently caught in the same location.

Lingcod, a type of Rockfish, are endemic to the West Coast of North America. They are found on the bottom, with most individuals occupying rocky areas at depths of 32 to 328 feet. Tagging studies have shown Lingcod are a largely nonmigratory species, with colonization and recruitment occurring in localized areas only.

When angling for Lingcod, we depend heavily on our chartplotter, a Lowrance HDS12 Gen3, and mark places where we have been successful. We’re always on the lookout for new reefs. We generally fish over rocks in the 65-100 feet level, depending on the time of year.

Rockfish can be found all along California’s coast and these fishing grounds are broken up into five areas managed by the Department of Fish and Wildlife. Reefs around Natural Bridges State Park in the Northern section of the Monterey Bay are hit pretty hard due to their proximity to the Santa Cruz Harbor, so I normally run up the coast about six miles north of the harbor.

Starting in October, Lingcod migrate to nearshore spawning grounds. The males migrate first, and establish nest sites in strong current areas in rock crevices or on ledges. Spawning takes place between December and March, and females leave the nest site immediately after depositing eggs. Males actively defend the nest from predators until the eggs hatch in early March through late April.

In order to maintain sustainable fishing practices, the California Department of Fish and Wildlife determines the timing and duration of Rockfish open season as well as which areas are protected year-long. Rockfish season is usually between April and December and can be found on the Fish and Wildlife website along with more information about the species. Lingcod don’t seem to have a preference as to the time of the day when they bite or feed more, but the wind, weather, and swell can affect your fishing. 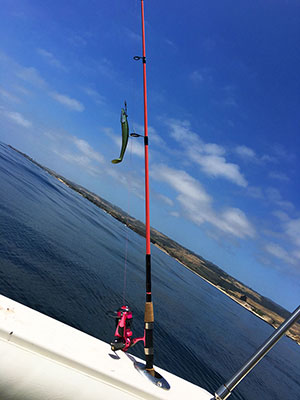 I use spinning rods and reels for casting swim baits and baitcasting reels for live bait and squid.

I have a variety of favorite rods and reels that I prefer, including CalStar, Shakespeare Ugly Stick, Crowder and Shimano Terez rods. I rig these with Avet, Okuma, Daiwa Saltist, and – a favorite – Daiwa Lexa. I use spinning rods/reels for casting swim baits, and baitcasters for live bait and squid. I generally spool 30lb. braid with a few feet of 20lb.-40lb. fluorocarbon leaders. Live bait rigs are either a single- and treble set up or double-treble.

There are several techniques to successfully catch Lingcod or Rockfish. My favorites include “fish traps” or “swim baits” (lead hooked head and plastic “tail” section), live bait (anchovies, Mackerel or baby Rockfish), or frozen squid. If there’s not much bait in the bay and you are unable to jig up fresh bait, your best bet is to use swim baits, as they seem to attract the Rockfish who are hungry for live bait fish (these emulate live bait).

Switch up your bait if one is not working. A Lingcod cannot resist a live Mackerel, and it may seem like the Mackerel is too big of a bait, but there is a reason that I call Lingcod the “pit bull.” They will attempt to eat fish that are big as they are! And of course, you can always use squid, which will most likely attract other types of Rockfish as well.

Depending on the wind and current, I use a 4-6 oz. weight, which is tied above the barrel swivel of the braid/mono connection. Bait a live bait by threading one hook through the cartilage of the nose and the other through the back spine, midway between the dorsal fin. Bait squid by hooking the top hook through the top of the body and the bottom hook near the tentacles or eye. 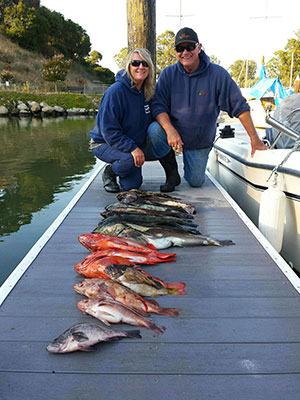 My favorite techniques to catch Lingcod or Rockfish include fish traps or swim baits, live bait or frozen squid.

Drop your line slowly and consistently to the bottom so it does not get caught up and tangled with your weight. Once you feel the weight hit the bottom (easy to tell if you are over rock – if over sand it will be a dull “thud”). Reel up a couple turns so your weight is not resting on the bottom. I like to slowly jig up and down a few feet, continuing to bounce my weight off the bottom and reeling up a few turns. If you are fishing over rock, the bottom will constantly change, sometimes suddenly dropping off 10-20' or rising over a spire.

One thing to note: you are fishing in rocky, craggy conditions, dragging your line and gear either right above (preferable) or across (dangerous) the rocks. It is not uncommon to get your gear caught up in the rocks. If you do get hung up there are two techniques I use to release the snag:

We have been able to retrieve the majority of our gear many times using this technique. When all else fails, break off the snag, reel in the remainder of your gear, and retie your rig.

I usually use a 4 oz jig head and root beer scampi. There are many bodies available to hook up to the head, try a few different ones to gauge their appeal. Superstition and luck come in to play at this point, too. Cast your fish trap using a spinning rod/reel towards the side or bow of the boat, depending on the drift. Allow the fish trap to drop to the bottom, and once you feel it hit the bottom, reel in the slack and pull the rod up in a straight motion. This will produce a swimming motion with the fish trap. Drop it back to the bottom, reel up the slack, and repeat until you have passed where you originally cast. Repeat. 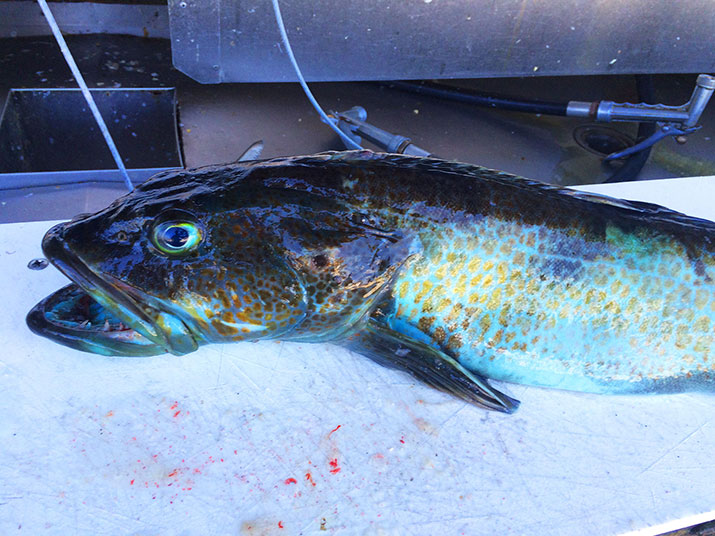 I refer to Lingcod as the “pit bull of the Pacific”. These fish are mottled and sometimes colored a brilliant turquoise blue.

When you fish for Rockfish you must be aware of the surrounding conditions and how they affect your drift. If you are drifting up the coast you want to position the boat below your first marks so that you drift past them while you are fishing. Generally early morning through 10:00 a.m. provide the best conditions.

If you don’t have a boat and you are new to this type of fishing, I recommend going out on a charter the first few times and asking questions of the crew. They are paid and tipped to help and don’t be afraid to ask questions. If you know someone with a boat, ask to go out with them and offer to help with gas. Most folks love to share their passion.

Anyone who even remotely knows Sharon Halcomb knows that she loves to fish. She’s open to go anytime, anywhere, for any species. Sharon has fished for Salmon in the Kenai River in Alaska, for Halibut in Ninilchik, trolled for Wahoo in Baja and Hawaii, and fly lined live bait for Yellow Tail, Yellow Fin and Bluefin Tuna in Baja. She currently lives in Northern California, where she fishes for Rockfish (including Lingcod, Vermillion and Cabazon), Salmon and the occasional Halibut. She also goes crabbing for Dungeness.