An acquaintance recently asked me how he could catch fish like I do. "Fish more often," I quipped. There is a good bit of truth to my quip. Of course, it doesn't hurt to be observant, a good listener, and lucky!

I "dabbled" in fishing all my life: from my childhood days crabbing and fishing the bays of South Jersey to fresh water fishing for Bluegill and Bass in Brevard County lakes and canals as a teenager. I loved to catch but didn't really know a thing about what I was doing. Then, I stumbled into offshore trolling and was immediately hooked! 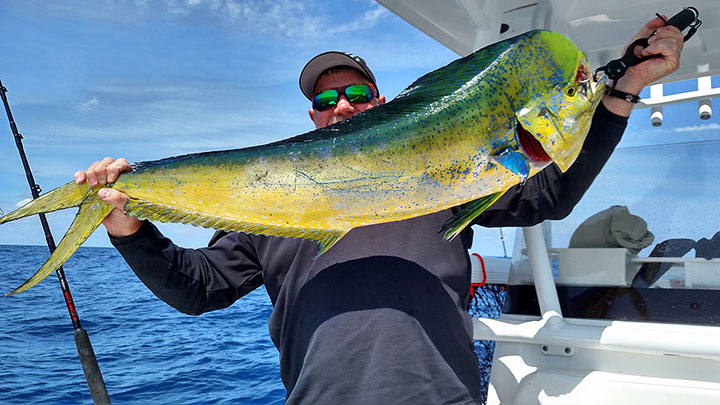 My tips are more likely superstitions than actual science, but they have brought in freezers full of great fish and multiple "once in a lifetime" catches!

While working at West Marine, customers frequently asked me to join them on their offshore fishing trips. After declining a lot of invitations, I finally agreed to join one customer, then another. I learned the basics from them; how to select and rig baits, set a trolling spread, speeds to run, even how to read instruments and operate gear I had been selling for years. 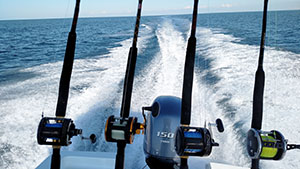 My normal spring spread will consist of 4 to 7 lines, usually running both outrigger lines 75-85 yards back with surface chuggers.

I compared how different anglers approached the sport. What gear did they use? How did they research conditions? What did they look for in, on and above the water? I hosted and attended seminars delivered by accomplished anglers, captains, mates and tackle representatives. Each had unique and useful perspectives, tips and advice.

With all I have learned over the years, I have developed some simple trolling techniques and habits that continue landing excellent fish. My tips are more likely superstitions than actual science, but they have brought in freezers full of great fish and multiple "once in a lifetime" catches!

Early spring along Florida's East Coast brings in big Dolphin fish (also known as Dorado or Mahi-Mahi) and Wahoo. These sport fish are usually well below the surface and best targeted using a downrigger or 16-24oz. trolling cigar leads. I use 16oz. leads skirted and trail skirted double-hook rigged Ballyhoo between 24" and 36" behind. I also incorporated a diving plug in my spread. I've had great results with Mann's Stretch 30 lures, but the lure moves around quite a bit so be very careful with your surrounding lines. 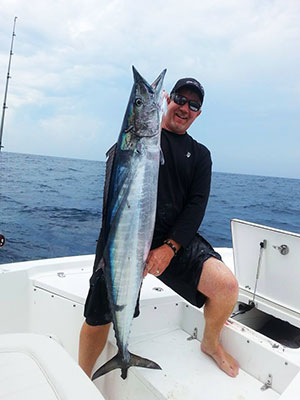 My normal spring spread will consist of 4 to 7 lines, usually running both outrigger lines 75-85 yards back with surface chuggers like C&H Lil' Stubbys or Bubblers. Inside of those, I run my Mann's Stretch 30 (Red/White or Dorado colored) about 30 yards back and a skirted 16oz. cigar lead with a trailing rigged Ballyhoo about 50 yards back. Inside of this, I place my long lines and shotgun. There is usually another trolling lead with a skirted Ballyhoo, another surface skirted Ballyhoo and a feather or Dolphin rig of any sort. These lines are usually about 100 yards back with the shotgun closer to 125+ yards back. I've trolled this same spread without outriggers just as successfully, but extra care needs to be taken with turns and trolling patterns.

In late spring and summer, these same techniques work well, but there seems to be more action near the surface. Around October or sometime in mid-fall when the humidity falls, I go back to the spring spread.

When it comes to knowing where to drop your lines, I have learned to look for any solid temperature change. I take note of the surface temperatures at port and pay attention to the gradual changes as I run out. Regardless of weed lines, bait or birds, I have been most successful catching big Dolphin and Wahoo by observing water temperature changes. Along Florida's Space Coast (the region around the Kennedy Space Center and Cape Canaveral Air Force Station), the surface temperature is pretty consistent from port and out to about 10-15 miles. The temperature changes more drastically 15 to 25 miles out and the lines are in when I notice a change of 4-5 degrees. I do most of my trolling between 6.5-10mph or 3.5-6kts, depending on the conditions; although, I have been successful at all trolling speeds. 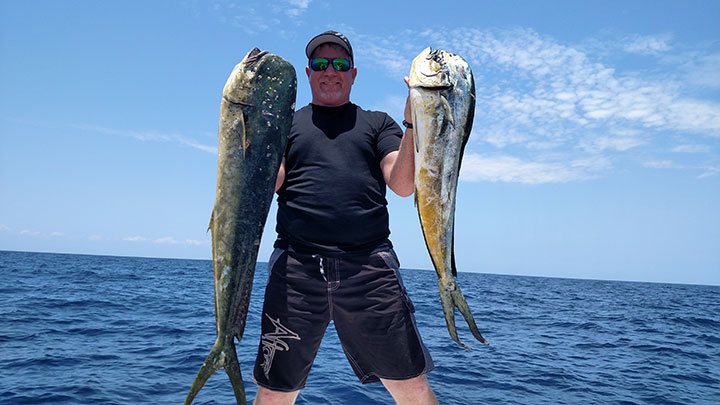 An acquaintance recently asked me how he could catch fish like I do. "Fish more often," I quipped.

Great surface temperature websites and reports are available online. Researching the night before will help make your trip a bit easier. The Rutgers Marine Educational Site is a free resource for anglers to access information on region-specific sea surface temperatures.

I am a fan of pre-rigged Ballyhoo mainly because of the time savings and ease of readiness. I prefer wire leader, double hooked, rigged Ballyhoo. When trailing them behind chrome, resin or plastic lure head it's easy to cut off the factory loop, thread the wire through the lure head and re-twist a new loop. When targeting Sailfish, I may run some single hook Ballyhoo. I occasionally use a chum block, but only in cleaner water. Chum blocks usually attract more barracuda and sharks nearer to shore or in water that has been churning for a while. 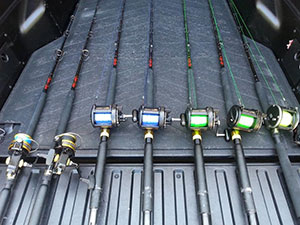 Captain's tip from Dan: spool no more than two reels of each color line and place the reels with the same color on opposite sides of the boat when setting your spread. This makes it easier to clear the mess and get lines back in the water in the event of a tangle.

I continually test different reels, rods and combos. For me, the most durable and economical reels continue to be the Shimano TLD series on Star Aerial rods. I also like Billfisher, Penn and Daiwa rods. I like the roller tip and stripper with my larger conventional reels as they reduce friction on the line and make for a smoother fight. I recommend lighter weight reels made of composite materials over steel-framed reels.

Among those in my arsenal are the Penn Defiance and Squall series, Shimano TLD series and the Daiwa Saltist series. I also keep some Penn Spinfisher, Battle and Fierce Spinning Combos on board rigged with Cobia eels and Dolphin feathers in the event we land on a school of either species.

I spool most of my conventional trolling reels with 40lb. monofilament in various colors. My smaller reels are spooled with 30lb. and my spinning reels are spooled with 20lb. or 30lb. monofilament. One tip I'll pass along is to spool no more than two reels of each color line and place the reels with the same color on opposite sides of the boat when setting your spread. This makes it easier to clear the mess and get lines back in the water in the event of a tangle.

After years of lugging tackle on and off the boat in soft and hard tackle boxes, the best tackle management system I found is using a soft-sided lure case. I now exclusively load all my trolling lures, leads and terminal tackle into a RAW Accessories USA soft-sided lure case. These cases come in three sizes and have a flat profile. Inside you will find 6-12 pocket mesh lure bags that Velcro into place like pages in a book. Each bag can be removed and hung from a T-Top or leaning post while in use and lures can be rinsed and left to dry while in the case at the end of the day. Additionally, I use RAW Accessories USA fish and bait bags as they are great quality, reasonably priced and made in the USA! 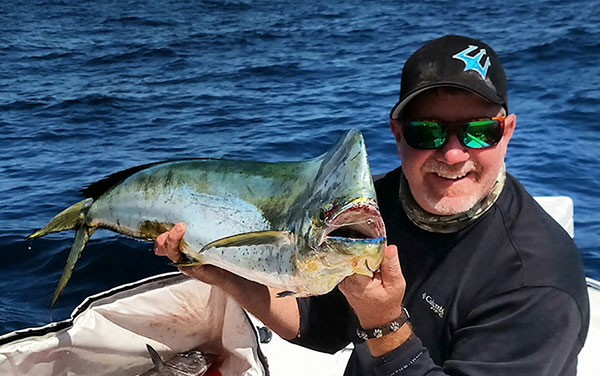 I have been most successful catching big Dolphin and Wahoo by observing water temperature changes.

If you are serious about offshore trolling, read Baits, Rigs & Tackle by Vic Dunaway, current edition revised by Captain Rick Ryals. This is a Florida Sportsman publication and one of the most comprehensive bait, rigging and technique books ever assembled. If you want to learn a lot quickly, book a charter with one of your local, reputable charter captains. You will learn a ton about your local area, pick up information about specific techniques and tackle, and have an unforgettable fishing experience. 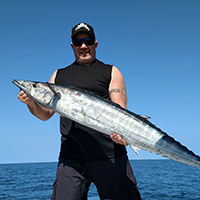 Dan Matarazzo fell in love with fishing at the age of five while fishing at his family's summer home on Silver Bay in Green Island, New Jersey. When he was 11, his family moved to Melbourne, Florida where freshwater fishing opportunities were plentiful. He was introduced to offshore fishing about 23 years ago when he began accepting offers to join West Marine customers on their offshore day trips. Immediately he was hooked and began sharpening his trolling skills by attending seminars, listening to tackle industry professionals, and learning from West Marine customers and employees. In 1995, Dan landed a Wahoo weighing in at 90.25lbs! It was the largest Wahoo caught out of the Sebastian Inlet in almost 20 years. It would be 12 more years before someone else broke that record. In 2013 he became the owner of a Sea Hunt BX22BR bay boat allowing him to support both his inshore and offshore passions. Dan fishes almost 50 days of the year and over the past few years, he has caught more than a dozen Wahoo! Many anglers fish for years without being able to land one of the elusive Wahoo.