Choosing Antifreeze for your Boat’s Systems 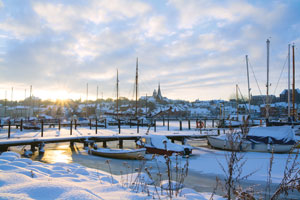 Propylene Glycol is a Safer Choice

The chemical in antifreeze that resists freezing is either ethylene glycol (EG) or propylene glycol (PG). Ethylene glycol makes a good antifreeze/coolant, but it’s a poison that’s deadly to pets and wildlife and makes disposal problematic. Propylene glycol is odorless, tasteless, biodegradable, and nontoxic. While it is slightly more expensive to produce, it offers a combination of safety and effectiveness we feel makes it a superior choice for marine use.

The main applications for antifreeze include winterization of potable water systems, sanitation systems, non-running engines and air conditioners. In addition to providing protection against freeze damage, some antifreeze can also be used as a coolant for running engines.

The temperature ratings (-50°F, -60°F, -100°F, etc.) that we associate with our antifreeze products denote the “burst point”, which is the temperature at which a sealed copper pipe filled with the undiluted product will burst. Burst points are a standard created by the plumbing industry in the 1930s to indicate the relative strength of antifreeze.

The freeze point is the temperature at which ice crystals (slush) will begin to form in the undiluted product. Slushing is not injurious to engine or potable water systems.

For an expanded discussion of freeze points vs burst points, and more about West Marine Antifreeze, click on the link at the bottom of this article.

No matter what type of antifreeze you choose, be sure to follow the manufacturer’s dilution ratio instructions carefully. When buying antifreeze, you are mostly paying for ethylene or propylene glycol, the proportion of which can vary from 25 to 95 percent. That’s why lower temperature rated products are more expensive. Products that advertise protection to -50°F may require that you use the product full strength, while other products can be diluted with water at a 3:1 ratio and provide the same -50°F protection. Shop carefully and remember that cheapest isn’t always the best value!