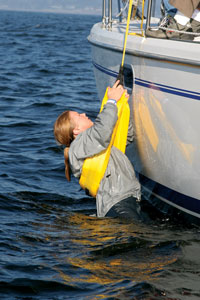 It’s a long way back up to that deck! The Lifesling2 rescue sling in use attached to a halyard on a sailboat.

Why You Should Be Prepared

Ask anyone who has ever fallen overboard if rescue gear is important you can be sure the answer will be a resounding "yes." Picture yourself in the water struggling to stay afloat while your bobbing head alternately vanishes and reappears among the peaks and valleys of the waves. Meanwhile, those onboard strain to maintain visual contact while they turn the boat around. Once alongside the boat, the gunwale, a mere three feet above you, suddenly seems like Mount Everest while hypothermia sets in and depletes your strength. Preventing situations like this from occuring—but when they do, turning them into a managed event with the best possible outcome is what this article is about. Equipping your boat with the right gear and knowing how to use it is key.

Equipment to Keep You Onboard

To prevent a crew overboard (COB) event, be sure your railings/lifelines are secure and properly anchored with pelican hooks that won’t spring open and stoutly thru-bolted stanchions. For open-water boating, fit low-stretch jacklines, wear a safety harness and clip on with a secure tether. This is especially important in single-handed sailing and higher speed races. If a singlehander is separated from their boat they will have no way of getting back aboard. Tethers and jacklines ensure that you will not be completely separated from your boat and recovery will be much easier. For more on this equipment, read our Advisor Article on Safety Harnesses, Tethers & Jacklines.

Powerboaters face a similar problem when they become separated from their boat. We will later briefly cover the advantages of different types of kill switches and overboard alerts. 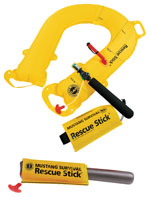 Throwables: All boats over 16' must carry a Type IV throwable device. Unfortunately, many boats use a square buoyant cushion with only 18lb. of flotation and no retrieval line in case the recovery team makes a bad throw. Ring buoys and horseshoe buoys are more buoyant and can be mounted conveniently on a bulkhead or rail in compliance with USCG regulations. Most buoys have an attachment for a retrieval line or drogue allowing them to be pulled back in if they land too far from the victim. These lines enable you to pull the victim back to the boat once they are holding on. The Rescue Stick is a compact baton-shaped inflatable float without a retrieval line that inflates into a horseshoe buoy. Keep in mind that the Rescue Stick is not USCG approved. Use it to complement other safety measures on your boat, but it cannot replace your Type IV throwable device.

Reaching Your Overboard Crew Member is Only Half the Battle

﻿Reaching the victim in the water often proved the easy part of the rescue for participants in Crew Overboard Tests we co-sponsored in 2005. Getting them back aboard was often substantially more difficult. Swim ladders and swim steps that are relatively easy to climb in flat water became lethal weapons with waves. “It is a serious mistake to assume that a swim platform is a safe or reliable rescue platform,” observed final report author John Rousmaniere. “With a Grand Banks 42, even a two-foot chop caused enough rolling to make it a sledgehammer.” We strongly advise that all boaters install and learn to use a Lifesling. They are the world's most popular overboard rescue gear and regarded by experts as the most effective. Our 2005 tests confirmed this. The impartial evaluation of Lifeslings and other equipment, rescue maneuvers and signaling devices are available in the still-relevant 2006 final report. 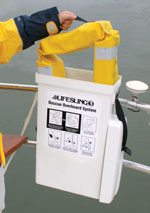 Your Lifesling can be easily stored in a case attached to the pushpit.

Rescue Slings: Lifesling2 for recreational boaters and the larger Lifesling3 for bigger recreational and commercial vessels combine the benefits of all the above throwable products and also function as lifting slings to hoist the victim onboard. With 125' or 150' retrieving lines, Lifeslings allow you to maneuver in a circle around the victim and tow the device and line directly to the crewmember. Tests show that fully-clothed victims quickly become dangerously tired from swimming even a short distance so you should not rely on an overboard crew member's ability to swim to a throwable device. Once contact is achieved, you haul the person hand-over-hand to your vessel, avoiding danger from a spinning propeller

Combine your Lifesling with a hoisting tackle to quickly pull crew members back aboard. Lifesling hoisting tackles easily stow in the case with the Lifesling and provide a mechanical advantage for pulling someone into the boat. Tackles are available with mechanical advantages of 3-to-1, meant for use on sailboats, and 5-to-1 meant for use on powerboats. Hoisting tackle for sailboats is deployed with a halyard and is intended to be used with a winch and powerboat tackle is deployed from a davit line or other lifting point at least 10 feet above the water.

Challenges Faced by Rescuers and Victims

Maintaining contact with a victim who goes overboard is the first rescue obstacle and is almost impossible at night or in large swells. Crew members who have gone overboard must make themselves as visible as possible to aid rescuers. Keep a bright, waterproof flashlight in a pocket on your PFD, mark your clothing with SOLAS reflective tape and wear a personal strobe like the ACR Firefly Pro Waterbug™ or a cyalume lightstick like the Orion Personal Marker Light to signal the boat. We can't say this enough: Wear your PFD at all times. Unless you have been seriously injured, proper flotation can keep you alive until rescued, sometimes even after you have become unconscious due to hypothermia.

Hypothermia is abnormally low body temperature due to loss of body heat to the environment. Hypothermia occurs rapidly in water because water absorbs heat about 25 times faster than air of equivalent temperature. Hypothermia causes loss of motor skills, judgment, consciousness and eventually results in death. While water less than 60°F acts more quickly than warm water, hypothermia can be a threat in waters as warm as 85°F. Many COB techniques fail to account for the fact that victims rapidly lose the ability to rescue themselves as hypothermia progresses. Even strong swimmers and individuals trained in survival methods gradually lose their ability to swim, think, use ladders, communicate, tie knots or hang on. Bottom line: Do not count on the victim's ability to help rescue themselves. Lifeslings, water activated PFDs and safety lights increase your ability to find and rescue the victim if they are incapacitated due to hypothermia.

Generalizing about the best rescue method for every powerboat or sailboat is risky. Multihulls vary widely in their handling and even two similarly sized multis might use dramatically different maneuvers. Some cruising monohulls are more comfortable beam-reaching with plenty of speed and are less apt to head upwind or downwind during the rescue. The best advice is to experiment with your own boat and know what works best and practice with your crew to prepare for a COB event. Preparing now could save someone's life.

Other Equipment for Overboard Emergencies

Crew overboard poles are used to mark the position of an overboard crew in the water. Pictured is the Inflatable Jonbuoy by Revere Survival.

Crew overboard poles: If your boat is moving fast and someone goes overboard you may travel hundreds of yards before you can successfully turn around. These poles are stored in an easily accessible location in the stern where they can be immediately dropped overboard marking the approximate location of the person in the water. Inflatable crew overboard poles save space by packing into a canister and automatically inflating when they are released into the water. Both options make tracking where the victim fell much easier and help with quicker retrieval.

Engine Kill Switches: Old-fashioned engine kill switches connect the captain directly to the engine by a cable that, if pulled hard or far enough to release, immediately kills the engine. This is a low-cost, excellent choice for solo powerboaters who don't want to lose their boat, engine running, while they struggle to stay afloat. This type of device does not, however, help the boater to get back into the boat. While most power boats are not as difficult to re-board as sailboats, this can still prove a challenging feat. More importantly, this only works for solo boaters. If there are additional crew members and one falls off, their fall and calls for help will not kill the engine, and may not even be heard over its sound, the wind and water.

Crew overboard alarms: Wireless engine cutoffs, such as those from Fell Marine also function as crew overboard alarms. Small xFOBs can be worn around your crewmembers' necks, wrists or clipped to PFDs and will immediately alert the captain if someone falls into the water—or shut the engine off if the captain falls into the water. As soon as the dash alarm sounds and lights up the crew can release a man overboard pole or the pilot can hit the MOB button on a GPS unit to log coordinates, making circling around to retrieve the victim easier. The CrewWatcher beacons coupled with a smartphone app from Weems & Plath also instantly alert the captain when someone wearing a beacon falls into the water and instantly logs the point of loss coordinates. The virtual MOB compass in the app then points you back to your point of loss for easier retrieval. These types of overboard alarms can also be attached to pets, luggage or gear onboard and more.

Personal safety lights: If you go over the side at night without a light to signal rescuers, your chances of survival are greatly reduced. Carry a small, bright light in your foul weather gear or a pocket of your PFD to signal others on the boat and ensure they can find you quickly. The participants in our COB tests found the Greatland Rescue Laser Light to be especially bright and effective.

Your life jacket: Your chances of survival increase dramatically if you wear your PFD whenever you are on deck. You may not be conscious when rescuers find you, but a PFD that keeps your breathing passages out of the water will keep you alive. Life jackets only work if you wear them.

To ensure you have the best life jacket for your boating activity and safety, see our West Advisor article, How to Select a Life Vest.