Marine radars are the best collision avoidance system ever developed for the recreational boater. Radar systems let you “see” through darkness, fog and stormy weather conditions. Once used only on large vessels, radar units are now compact, draw little electricity and are sized to fit boats as small as 18' in length. Combined with AIS (Automatic Identification System, see our West Advisor) and a modern electronic chartplotter with up-to-date digital charts, radar can be a real lifesaver. 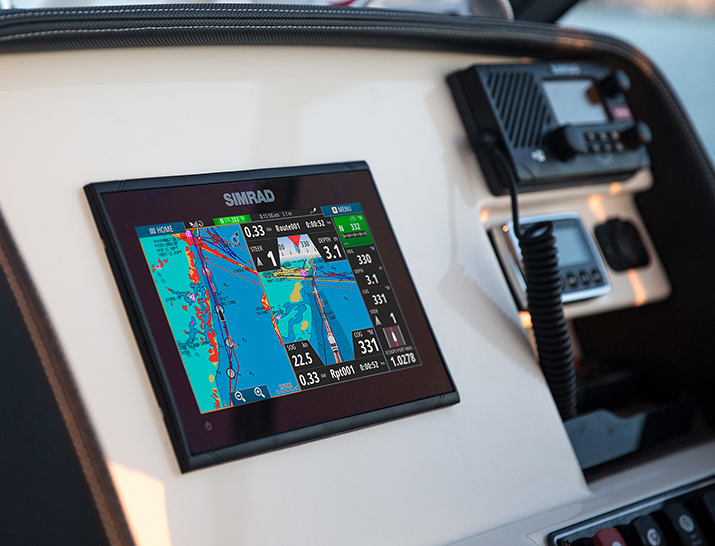 Be sure your chartplotter or combo supports radar! Simrad’s GO9 is compatible with their radar scanners. Their GO5 and GO7 are not.

One of our customers wrote the following review (of a Raymarine RD418HD dome) that concisely sums up the value of radar:

“I use radar all day off the Oregon coast. Navigating a tricky bar in the fog is impossible without radar, and overlaying synched data on top of my chartplotter makes it much easier. Offshore, I can locate other fishing boats, large bird flocks and obstructions while navigating and fishing. With multiple displays, you can overlay radar data and view it separately at the same time. I won't go offshore without it.”

Are Your Electronics Compatible with Radar?

Compatibility is a key question if you’re considering adding radar. Many chartplotters and GPS/fishfinder combos including the Garmin echoMAP series, Raymarine Dragonfly Pro, Lowrance Elite, Simrad GO7 and B&G Vulcan are not compatible with radar.

In general, multifunction displays can operate a radar unit, while smaller or more basic combos—especially those intended for inland fishing applications—cannot. That’s why if you’re considering a whole new suite of electronics for your boat, or if you’re thinking of adding radar to your current equipment, you should think about compatibility first.

Do You Have a Powerboat or a Sailboat? How Large Is Your Boat?

Answering these questions settles your choice between the two forms of radar units, the open array or the radome. Open arrays (where you can see the rotating arm turning, like on a Navy ship) have the widest antennas, the narrowest beamwidth, between 3.5° and 1.1°, the sharpest focus for picking out small targets, and the longest ranges. Open arrays are best for large powerboats with radar arches or pilothouses. They’re also used by hardcore anglers on smaller fishing boats who search for flocks of birds to precisely target groups of fish.

Radomes, with the moving parts inside an 18" or 24" dome, offer better mounting flexibility where space is limited. Horizontal beamwidths between 3.5° and 7° give sharp enough resolution, although small adjacent targets may get clumped together. Radomes are best for the walk-around fishing boat, RIB, small cruiser or sailboat. For sailors, a radome is safe around your halyards and sails because there are no external moving parts to snag your rigging. They also use less power than open arrays, an important consideration for long-distance cruisers. 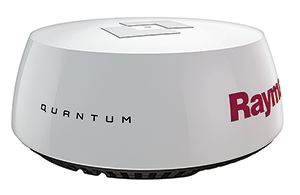 How Far Do You Need to See?

This question, how much range you want from a radar, involves a couple of factors and some trade-offs. First, there’s the factor of height. Your radar can’t see over the earth’s curved horizon, so the height of your unit above the ocean surface, and the height of the target you’re looking at limit how far away you can identify objects.

For the techies among us, here is a simple formula: (1.22 nautical miles x square root of height of radar) + (1.22 nautical miles x square root height of target) In simple English, that means that if your boat has an antenna on a T-top that’s nine feet off the water, and you’re searching on the screen for a boat that’s the same size, you’ll need to be within 7.3 nautical miles (1.22 x 3 + 1.22 x 3 = 7.32). That’s the best-case scenario, but since fiberglass isn’t a very good radar reflecting material, you might have to be a lot nearer before you see the other boat.

Here comes the first trade-off: Installing your radar in a higher position increases the maximum range, but it also increases the minimum range around your boat, inside which targets cannot be detected. If you’re a fisherman and you’re looking for a stationary group of sport-fishing vessels (or birds that are feeding on fish), you’ll want lots of range. But if your main purpose in installing radar is to see close-in pilings, moored boats or rocks in your foggy harbor, you’ll go for short-range performance.

Guess what? In radars, as in many areas in life, more power is better. While increased power allows you to see farther, it is far less important than the height of your antenna, the height of your target and the target’s ability to reflect radar. Transmit power is more important in poor weather since fog, drizzle, and rain absorb the energy and reduce radar range.

Outputs for traditional pulse style recreational boating radars range from 4kW to 25kW. Although you can still buy a 2kW or 2.2kW radar, you’ll probably regret choosing a radar with a 24 nautical mile range. The typical range for a 4kW radar is 48 nautical miles (nm), so you get what you pay for. 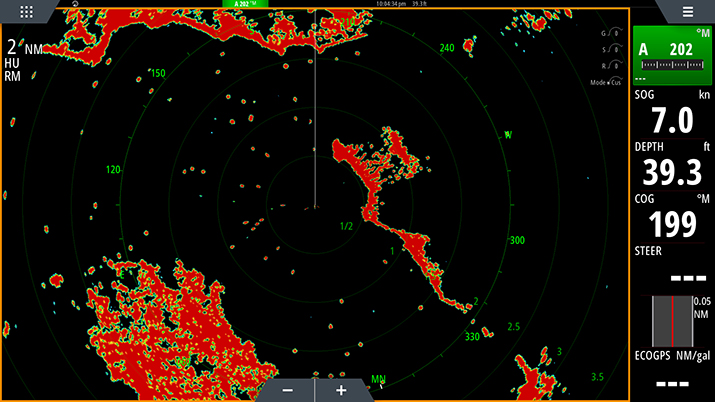 This discussion has so far left out the two technology choices you have available in radar—our second trade-off involving how much range you need—the traditional “pulse” radar and new solid-state or broadband radar.

Solid-state, broadband radar sends a continuous transmission wave with linearly increasing frequency (hence the term broadband). The wave retains its frequency as it travels out and reflects back from any objects. Meanwhile, the transmitter continues to output an increasing frequency. The difference between the currently transmitted and received frequencies, coupled with the known rate of frequency increase, is the basis for precisely calculating a “time of flight” and target distance. Since FMCW constantly builds up radar return energy (vs. a single “main bang” pulse), this system provides target detection superior to pulse radars while transmitting at far lower energy levels. 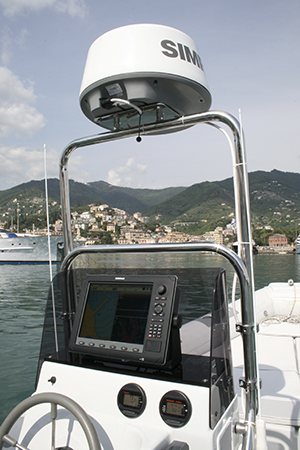 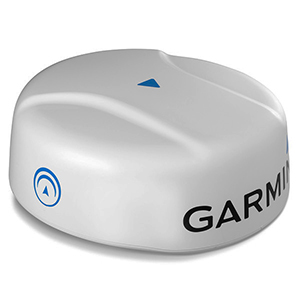 Once you’ve chosen your radar, you need to choose the best location for maximum range, safe operation and minimum blind spots. The antenna must be mounted above head-height since direct exposure to the electromagnetic energy emitted by a radar antenna can be harmful. (This warning applies less strongly to the low-emission solid-state radar devices discussed above.) The best location, usually the highest point on a powerboat, will give the radar an unobstructed 360° view. Avoid mounting near large masts, horizontal spreaders, stacks, or other solid objects, as they will produce shadows, reflections or blind spots. 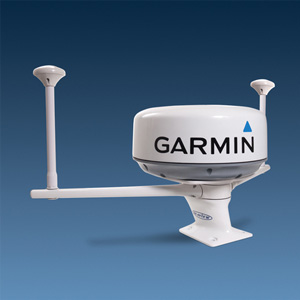 Streamlined mounting struts from Seaview provide a clean way to raise the radar above spotlights, horns or other hardware. Radars have a vertical beamwidth of about 25°, so a level mounted antenna will project the beam downward about 12.5°. Planing-hulled boats that run with their bow raised may need to shim the back of the mount, or close-in targets ahead of the boat may be invisible.

Sailboat radars are usually mounted on the front of a mast, on an Edson or Seaview radar mast or a backstay. Seaview self-leveling mounts keep the dome level, regardless of the angle of heel (so sideways visibility is not reduced if the boat heels more than 12.5°).

Wiring is straightforward. A dedicated circuit from the distribution panel, with wire gauge between AWG 7 and 16, typically protected by a 10-30A breaker (depending on the radar’s size) provides power. The antenna on small radome units is powered through the display, connected by a multi-conductor cable that includes positive and negative power leads. Open array radars often have a separate DC power cable for their antenna. The other connections usually include an electronic compass and GPS or other network cables. Raymarine’s Quantum™ Radome is the simplest to install, with Wi-Fi wireless networking to one of their LightHouse II powered multifunction displays.

Installing radar will provide peace of mind when boating under difficult conditions. Tuning of modern radars is automatic, and the learning curve is reasonably easy. While choosing the right antenna location is critical, installation is within the skill range of the average handy boat owner.