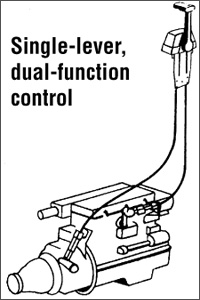 Dual-function mechanical controls are the most popular type of control in use today because they make boat handling easy. Both shift and throttle are operated by a single lever in a very instinctive action. Shifting is quick and can only be done at low rpm, which protects the engine's shift mechanism. Two cables are used: one for shift and one for throttle.

Dual- or multiple-station applications almost always use single-function two-lever controls. There are two basic systems recommended for multiple station installations. The choice is dictated by the sum of the degrees of bend in the cables. The fewer the bends, the more efficient the cable action. The control system that gives the fewest degrees of bend should be chosen. 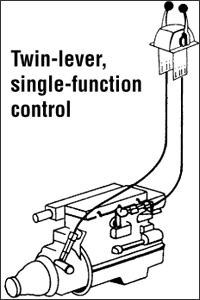 The parallel control system is used when cable runs are relatively short and direct. It consists of cables from each control station running all the way to the clutch and throttle at the engine. An option with this system, for use when cable runs are long, difficult or would be too costly, is to run cables from the both controls to a transfer unit. Then single cables can be run from the transfer unit to the engine. 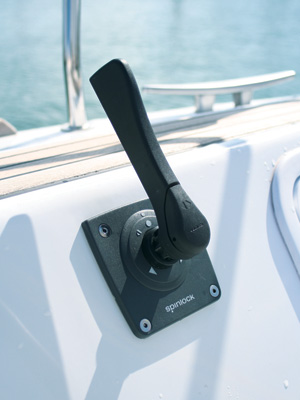 The handle on Spinlock's ACTU Throttle Control Lever can be removed when it isn't in use.

There is a very popular and hard-to-locate single lever, dual-function control that’s used on many inboard-powered sailboats. It’s made by Spinlock, a British supplier of high-quality rope clutches, offshore life jackets and other gear. The Spinlock ATCU is a conversion kit that works with SeaStar Systems throttles (sold separately). The ATCU/1 is designed to fit SeaStar models B700B, B80/S,C80/L,CH2100P and CH2600P. Available by Special Order, it is Model 10346344. We can also Special Order replacements for the removable handle, in case a member of your crew drops yours overboard. If this happens, any standard winch handle will fit the ACTU, allowing you to control your engine in a pinch.