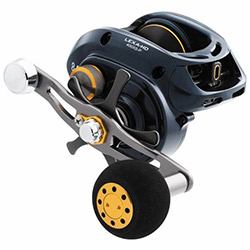 The Lexa 400 Hyper Speed baitcasting reel from Daiwa boasts an 8.1:1 gear ratio and a line speed of 43 inches for fast retrieve.

Popular among many freshwater and inshore saltwater anglers, baitcasting reels are designed to be better for casting than conventional reels. They often include braking systems to reduce the possibility of backlash and most include a level-wind mechanism that moves the line back and forth on the spool when the line is reeled in—which eliminates the need for an angler to guide the line with their thumb. Gear ratios and line speeds are often much higher on baitcasting reels compared to spinning reels, enabling anglers to give crankbaits, buzzbaits and other specialized lures the action they need to entice fish. The speed needed to pull a buzzbait along the surface can quickly become exhausting on a spinning reel, making baitcasting reels a common choice for these presentations.

In the hands of a beginner, baitcasting reels can be difficult to use. Despite the fact that the reel has a braking system, an angler must thumb the spool toward the end of a cast to avoid backlash. Training your thumb takes time which gives baitcasting reels a steep learning curve. Another drawback is that the lure must be heavy enough to overcome the inertia of the spool. This makes light lures a poor choice for use with baitcasting reels. If you enjoy fishing with very light tackle, consider a spinning reel instead. Most baitcasting reels have a star drag, which can be awkward to adjust when playing a fish compared to a lever drag. Keep in mind that the handle on a baitcasting reel cannot be swapped from one side to the other making your preferred cranking hand one of the first narrowing criteria for selecting a reel.

What to Consider When Choosing a Reel

Where you fish and what you are fishing for will be the main determining factors of what style and size reel you need. Personal preference will play a role as well, but make sure that the reel you choose is suited for what you're trying to catch.

Consider where you plan to fish when selecting a reel. Freshwater does not corrode reel components as quickly as saltwater, meaning reels used exclusively in freshwater do not need to be as resistant to corrosion. Saltwater can quickly corrode bearings and gears making a reel’s action rough if it is not built for ocean use. If you plan on using your reel in saltwater, look for models that feature shielded or anti-rust ball bearings.

Baitcasting reels generally work well for inshore saltwater species and large freshwater species such as big largemouth bass, northern pike and muskellunge. While many baitcasting reels are built with anti-corrosion bearings and can be used for saltwater fishing, they are not a good choice for offshore fishing such as trolling for marlin or tuna.

Parts of a Baitcasting Reel 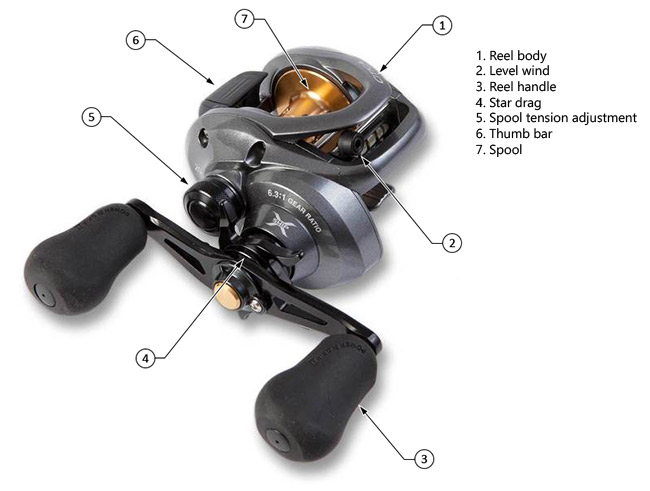 When it comes to gear ratios and line speed, baitcasting reels often beat spinning reels. With gear ratios of 8.1:1 or more and line speeds of 43 inches, experienced anglers can make hundreds of casts per day with little or no fatigue. The fast retrieve of baitcasting reels coupled with the relative stiffness of baitcasting rods also enables anglers to give specialized lures like crank or buzzbaits the action they need to entice fish to bite. Keeping up the speed needed to pull a buzzbait across the surface of the water can be exhausting with a spinning reel, but a high-speed baitcasting reel makes keeping up this type of lure presentation much easier. A higher speed reel also enables you to quickly pull fish away from hazards after the hook is set before the fish has a chance to bury itself in grass, roots or other cover.

The braking system moderates spool speed during the cast and is meant to prevent backlash or “birds’ nests” that come along with it. While braking systems are a big help in preventing backlash, the brakes must be complemented by the angler’s “educated thumb” to control spool rotation at the end of the cast when the lure hits the water. Braking systems come in two types: Centrifugal or magnetic.

A level wind system ensures the line wraps on the spool evenly as you reel the line in. As you turn the reel handle, the level-wind line guide moves from side to side to prevent the line from building up in a single spot, which if gone unchecked, can prevent the spool from spinning. Reels without this feature require the angler to manually guide the line back and forth with their thumb when reeling in, which can be difficult for inexperienced anglers.

The strength of fishing line is quantified in pounds and is referred to as the test of the line. The line capacity of a reel is the maximum length of line the spool can hold without overloading the reel. The diameter of fishing line increases along with its strength, which means higher test line takes up more space on the spool. For example, a reel that holds 160 yards of 30-pound test monofilament might only hold 120 yards of 40-pound test or 100 yards of 50-pound test. Most reel manufacturers list line capacities for both monofilament and braided line. Braided line capacity is generally higher than monofilament because braided line is made from materials such as Dacron and Spectra fiber, which can achieve higher test in smaller diameters compared to nylon. When selecting a reel, consider the size of the fish you want to catch and match the line capacity accordingly. For more information on fishing line, make sure to check out our West Advisor on Selecting Fishing Line.

Low Profile or Round

Baitcasting reels are available in round and low profile styles to fit different needs. Round reels often have larger line capacity and allow a big fish to take more line when it makes a run. Low-profile reels allow the angler to palm the reel and rest the line on their index finger for more sensitive feedback from the line to detect strikes.

The drag on a fishing reel consists of an adjustment point and metal drag washers typically separated by carbon fiber or felt washers to reduce friction. The drag moderates how much force can be put on the line before the spool will slip and let out more. A general rule of thumb is that the drag should be set at 20 to 30 percent of the breaking strength of the line to avoid breaking the line while playing a fish. For example, when using 20-pound test the drag should be set between four and six pounds. You can easily check your drag setting with a hand-held spring scale. Since most baitcasting reels use a star drag, which can be awkward to adjust when playing a fish, make sure that your drag is set properly before casting to avoid losing a catch because of too much or too little drag.

While more ball bearings generally mean smoother reel action, the quality of the bearings is important also. If you plan to use the reel for saltwater or surf fishing, make sure the reel is equipped with corrosion resistant or shielded bearings. Bearings not designed for saltwater will quickly corrode with ocean use and will make reel and drag actions rough.

The anti-reverse is a ratchet and dog combination that allows the angler to reel line in but does not allow line back out. When a fish is on the line, engaging the anti-reverse stops the crank from spinning except for reeling the line in, which frees up one of the angler’s hands for netting the fish.

If you already have a rod you are planning to use, make sure your new reel is compatible. A single rod and reel combo will not work for all applications, but your reel and rod must match each other. Like reels, rods are rated for different line tests and using higher test line than the rod is rated for could damage or break the rod. Baitcasting rods are also stiffer compared to spinning rods and have more backbone, providing more force when setting a hook. The guides on baitcasting rods are also smaller and closer to the blank, which keeps the line closer to the rod during a cast. Spinning rods, however, have a set of guides that graduate from large to small to accommodate the line as it spirals off the spool during a cast. Spinning rods have a more flexible action compared to baitcasting rods, which provide less force when setting a hook—but can aid in finesse fishing. The takeaway here is that your choice of reels does not boil down to considering the reel alone. Instead, you should consider the reel and rod combination that will work best for your style of fishing. To simplify this process, we offer pre-assembled, balanced rod and reel combos for a variety of different types of fishing.