Used for freshwater, inshore and offshore saltwater fishing, conventional reels are popular with a wide variety of anglers and are available in a range of sizes. These versatile reels are suitable for many different fishing techniques including casting jigs, trolling, deep-drop fishing, kite fishing, pier fishing and more.

Conventional reels offer a straightforward, proven design that works particularly well to pull in large or deep dwelling fish. While large reels hold lots of high test line, which makes them a good choice for big game fishing, conventional reels are offered in a variety of sizes making them suitable for many different kinds of fish. For the offshore or big game angler, many reels feature harness lugs for attachment of a fighting belt.

Conventional reels generally have lower gear ratios than baitcasting and spinning reels, meaning the spool will crank slower but will also have greater torque for pulling in large fish. Two-speed reels offer the best of both with a low gear for more torque and a high gear for faster line retrieve.  Since conventional reels are mainly used for ocean fishing, anti-rust bearings are typically standard equipment to avoid saltwater corrosion.

While conventional reels perform well for many types of fishing, there are a few disadvantages to keep in mind. Many do not include a level-wind feature, which means that when reeling in you have to physically push back and forth on the line with your thumb to ensure that the line winds evenly on the spool which can be difficult for beginning anglers. Conventional reels are also more difficult to cast because they do not have a centrifugal or magnetic braking system to reduce backlash like baitcasting reels do.  Also, keep in mind that unlike spinning reels, the handle on a conventional reel cannot be swapped from one side to the other, meaning that the hand you prefer to retrieve with will be one of your first narrowing criteria when selecting a reel.

Parts of a Conventional Reel 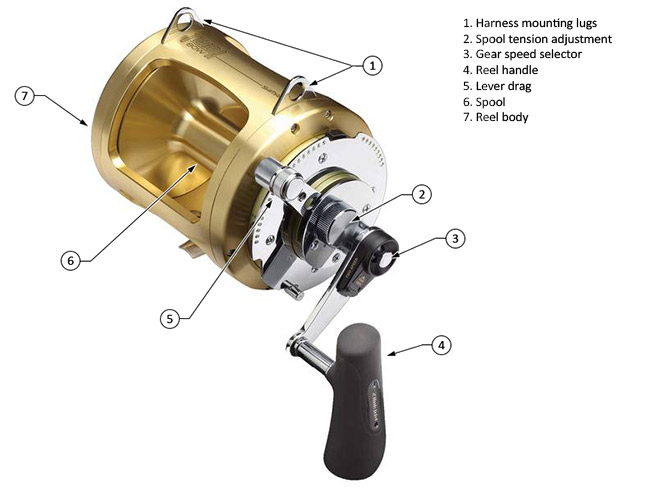 Level wind mechanisms ensure the line wraps on to the spool evenly without building up in one spot, which can stop the reel from spinning. Without a level wind, the angler must guide the line back and forth with their thumb. Some anglers find that a level wind is unnecessary when using braided line because it has a tendency to lay down on the spool pretty well on its own. Monofilament, on the other hand, requires a lot of attention to spool evenly; so if you prefer to use monofilament, you might consider a level wind reel instead. Some surfcasting fishermen shy away from level wind reels because salt or sand blowing into the mechanism can jam the level wind and end a day of fishing prematurely. Other anglers believe that level winds create friction on the line while casting which results in short casts.

While we could debate all day about the advantages and disadvantages of level wind, much of the decision comes down to personal preference. Some anglers enjoy the extra interaction with the reel and perfecting a method of guiding line back on to the spool can be a source of pride for many. Other anglers prefer the convenience of focusing less on the line and more on the fish at the other end. 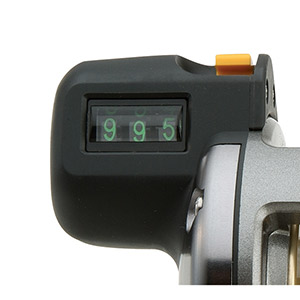 Shimano's TEK300LC Reel features an analog line counter to keep track of how much line is out.

Line counters allow you to consistently drop your bait to the same depth and stay in the strike zone, which can lead to more catches. Many conventional reels feature built-in line counters that are helpful when trolling or deep water fishing.

Fishing line strength is quantified in pounds and is called the test of the line. The line capacity of a reel is the maximum length of line that can be used without overloading the reel. The diameter of fishing line increases along with its strength, which means higher test line takes up more space on the spool. For example, a reel that holds 160 yards of 30-pound test monofilament might only hold 120 yards of 40-pound test or 100 yards of 50-pound test. Most reel manufacturers list line capacities for both monofilament and braided lines. Braided line capacity is generally higher than monofilament. This is because braided line is made from braided or woven materials such as Dacron and Spectra fiber, which can achieve higher test in smaller diameters compared to nylon. When selecting a reel, consider the size of the fish you want to catch and match the line capacity accordingly. For more information on fishing line, make sure to check out our West Advisor on Selecting Fishing Line.

Power assisted reels save time and reduce angler fatigue. They are often used when deep-drop fishing to quickly retrieve heavy sinkers and check bait or when kite fishing to reel in kites in heavy wind. Another use for power-assisted reels is daytime fishing for swordfish, which are often found at depths of 1,500 feet or more. Don’t think that power-assisted reel take all the sport out of fishing, as many feature a manual crank enabling you to play a fish unassisted at any time.

All fishing reels have an adjustable drag which consists of an adjustment point and metal drag washers typically separated by carbon fiber or felt washers to reduce friction. The drag moderates how much force can be put on the line before the spool will slip and let out more line. This allows the angler to set the drag of the reel lower than the line test to avoid breaking the line while playing a fish. Too little drag won’t tire out the fish enough though and could allow the fish to make a big run taking out a lot of line in the process. Lever drag systems are popular on heavy saltwater reels because the angler can easily switch between different drag settings for different portions of a catch. Lever drags typically feature free spool, bait, strike and max settings.

Generally, more ball bearings are better, but the quality of the bearings is important also. Since conventional reels are meant to be used for saltwater, anti-rust or shielded bearings are often standard equipment.

The anti-reverse lock is a ratchet-and-dog combination that allows line to be taken in, but does not let line out and is helpful when trolling. After the bait or lure is let out and drops back to trolling distance, the lock is snapped on before putting the rod in the holder. The bait is held against the drag brake, which is set lower than the breaking strain of the line. When a fish strikes, the pull overcomes the resistance of the drag but brake tension is sufficient to set the hook. From there, the angler takes over to play and land the fish.

If you already have a rod that you are planning to use, make sure your new reel will be compatible. A single rod and reel combo will not work for all applications, but your reel and rod must match each other. Just like reels, rods are rated for different line tests and using higher test line than the rod is rated for could damage or break the rod. Many conventional rods are rated for higher test lines and are a good option for deep water fishing or trolling. Longer conventional rods are rated for lower test, but also provide more rod action and less force to avoid tearing the hook out of a soft mouth fish. The takeaway is your choice of reels does not boil down to considering the reel alone. Instead, you should consider the reel and rod combination that will work best for your style of fishing. To simplify this process we offer already assembled rod and reel combos for a variety of different fishing types and species.