Choosing a GPS Receiver for Boating or Wilderness Travel 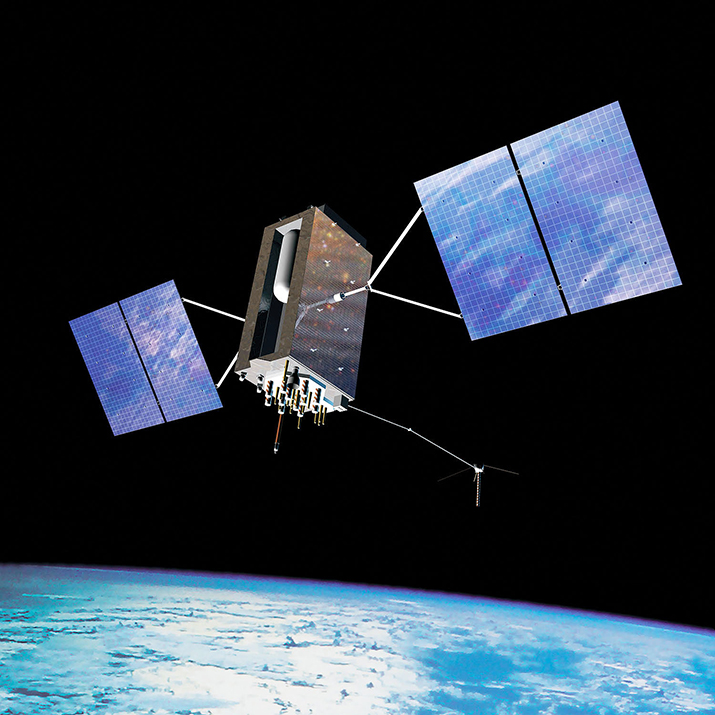 Here is an artist's rendering of a new Generation III (GPS Block IIIA) satelite. After many delays in deployment, the first of ten Block IIIA satelites was launched in December 2018.

The Global Positioning System is a satellite-based navigation system that provides accurate position fixes 24 hours a day, on land, sea and air, in any weather, with no subscription or fee. Originally built between 1978 and 1994 for the U.S. Department of Defense with a nominal constellation of 24 satellites (actually 32 satellites as of January 2018, with 31 in use) in medium Earth orbit (MEO) 12,550 miles above the Earth, this multi-billion dollar system is available for all users.

GPS units receive high frequency, low power signals (50 watts or less) from these satellites orbiting the Earth every 12 hours. By timing the signals sent by the satellites (which each carry a highly accurate atomic clock) and by knowing the exact orbital locations of the satellites, a GPS receiver can determine your location to an accuracy within 6 meters 95 percent of the time, and your altitude to within approximately 10 meters. 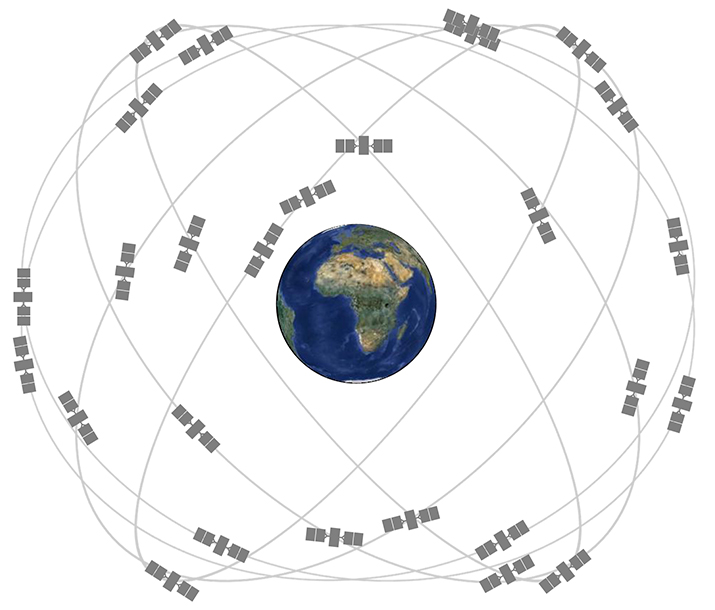 GPS receivers need to locate three satellites in order to calculate a two-dimensional position, and can develop a three-dimensional fix when they receive signals from four satellites.

Since, in theory, four satellites are “in view” from every location on Earth, problems with reception are caused by buildings, mountains and forests blocking the line-of-sight signals.

The GPS system transmits signals on two bands designated L1 and L2. Civilian GPS uses the L1 frequency of 1575.42 MHz in the UHF band. The civilian signals were intentionally degraded in accuracy until May 2000, when the military program called Selective Availability (designed to prevent military adversaries from using the highly accurate GPS signals) was discontinued.

WAAS Improves the Accuracy of the System

The Federal Aviation Administration (FAA) and the Department of Transportation (DOT) have developed the WAAS (Wide Area Augmentation System) program, which corrects for GPS signal errors caused by ionospheric disturbances, timing, and satellite orbit errors, and it provides vital integrity information regarding the health of each GPS satellite.

WAAS, with about 25 ground reference stations across the United States that monitor GPS satellite data and two master stations on either coast, creates a GPS correction message. This correction accounts for GPS satellite orbit and clock drift plus signal delays caused by the atmosphere and ionosphere. The corrected differential message is then broadcast through one of two geostationary satellites, with a fixed position over the equator. Any GPS receiver equipped to receive WAAS (all except the least expensive units) has its accuracy improved to less than three meters.

WAAS satellite coverage is only available in North America. There are no ground reference stations in South America, so even though GPS users there can receive WAAS, the signal has not been corrected and thus would not improve the accuracy of their unit. For some users in the U.S., the position of the satellites over the equator makes it difficult to receive the signals when trees or mountains obstruct the view of the horizon. WAAS signal reception is ideal for open land and marine applications.

Why a handheld GPS instead of a smartphone?

With the ubiquitous smartphone in use by millions of urban consumers, handheld GPS receivers are a great alternative for boaters, hikers, geocachers and others who want a waterproof, off-the-grid navigating device. For small boat outings, dinghy sailing or hiking, one of the many pocket-sized, handheld GPS units is ideal. In addition to being conveniently portable, these battery-operated receivers provide an additional measure of safety should a larger vessel's electrical system fail.

Although you can use your iPhone or Android for navigation, a handheld GPS has some important advantages:

Many boats larger than an aluminum outboard skiff will also have a fixed-mount GPS device. These take the form of a chartplotter, fishfinder/GPS combo or multifunction network display. For help choosing one of these devices for your boat, check out our West Advisor on Selecting Networked Marine Electronics

Non-mapping GPS receivers: All GPS receivers other than the most basic handhelds feature electronic maps, so you can see your position on a detailed chart. If you only want to get position fixes and navigate using just traditional paper charts, a receiver like the Garmin GPS 73 will provide that capability, and will let you plan routes with a collection of waypoints. A few larger fishfinders like the Garmin Striker™ series likewise include non-mapping GPS as sort of a bonus. They’ll help you return to a great fishing location or your home port, but will not let you add maps.

GPS with a basemap only: Most GPS units are pre-loaded with a “basemap”, with varying levels of detail depending on the individual receiver. Basemaps usually show crude, blocky representations of geography. Luckily, many of these economy-grade GPS receivers allow you to add more detailed maps.

To really achieve the full level of mapping detail, with charts showing information down to the level of a few feet, nearly all receivers use electronic moving maps designed for marine, automotive, off-road or backcountry use that show your position superimposed directly on the chart. There are a couple of ways this digital map data is delivered:

Pre-loaded: A convenient feature provides the data pre-loaded on the receiver, using either flash memory or a hard drive. Worldwide basemaps that are part of the firmware of many receivers also include a reasonable level of detail, so rough outlines of coastlines are still shown when you move out of an area covered by your electronic cartography.

Maps on a microSD card: Many charts are sold on small cartridges containing a regional data file that are inserted into a port on the receiver. To travel to new locations you purchase additional chips for each region with C-Map, Navionics, BlueChart g2 or other charts compatible with the receiver.

Newer Garmin handheld units use tiny MicroSD Cards, which are about 1/4 the size of a postage stamp. These miniscule cartridges, with up to 64GB of storage, have the same BlueChart g2 marine regions as Garmin’s larger Preprogrammed Data Cards. More information to help select cartographic charts is available in the West Advisor, Selecting Electronic Cartography.

Do you want a radio with that GPS receiver?

Other nations have built or are launching their own satellite navigation systems. The Russian Global Navigation Satellite System (GLONASS) is fully operational worldwide. There are also the Indian Regional Navigation Satellite System, the Japanese Quasi-Zenith Satellite System covering Asia and Oceania and the Chinese BeiDou-2tf currently limited to Asia and the West Pacific. The European Union and other partner countries are building Galileo, a global system that began operation in 2016 (and should be fully deployed by 2019). Many new GPS receivers connect with both the GPS and GLONASS constellations. This provides improved accuracy and a backup plan in case the GPS system was to ever go off-line.

The U.S. military invested billions of dollars building Navstar (the original official name for the GPS system) for military purposes and created the world’s greatest navigation system for civilian use as an afterthought. Okay, it did cost $14 billion to create the system and launch the satellites, but now we get to use the satellites essentially for free.