How to Select a Marine Battery

West Marine offers three different types of batteries: Starting, deep cycle and dual-purpose. Each of these battery types is offered with a choice of battery chemistries, which are flooded lead acid, gel, AGM (Absorbed Glass Matt) and most recently, Lithium Iron Phosphate. When choosing a battery, first consider how the battery will be used. For example, will it be used for starting an engine, powering "house" loads or maybe for both? Your choice of battery chemistries will depend on the performance you desire—balanced against how much you are willing to spend. Let's begin by discussing the three battery types and then move on to the characteristics of the different battery chemistries from which you can select. 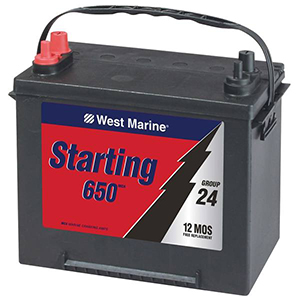 This Group 24 marine starting battery is not just a car battery. It uses lead-calcium chemistry, has a no-spill design, and can be tilted to a 45° angle.

Starting batteries, which crank the starter of your boat's engine, are the sprinters of your electrical system. They deliver between 75 and 400 amperes for 5–15 seconds, and then are recharged in short order by your engine's alternator. Like all lead-acid batteries, they are constructed with alternating layers of negative and positive plates with insulation between them.

Starting batteries have thinner and more numerous plates, providing extra surface area to generate high amperage bursts of current. The two drawbacks of this construction are that the plates are relatively fragile in high-impact environments, and that starting batteries do not tolerate deep discharges, which reduce their operating lifespan.

Your boat's house battery bank uses deep cycle batteries, the marathon runners of the storage system. They power the electrical loads on your boat when no charge source (shore power charger, engine alternator, wind generator or solar panel) is available. Consider them a kind of savings account into which energy is deposited or withdrawn.

Compared to starting batteries, which deliver high bursts of energy for short periods, deep cycle batteries recover fully after being heavily discharged over longer periods because their design features thicker plates with a high content of antimony. Overnight, their use might deplete 50–70 percent of the battery capacity, depending on the house loads of the boat. When the batteries are recharged, energy is re-deposited into the bank, and the process, or cycle, starts over. Generally, deep cycle batteries should be sized to store three to four times the expected amount of energy to be used between recharge cycles. 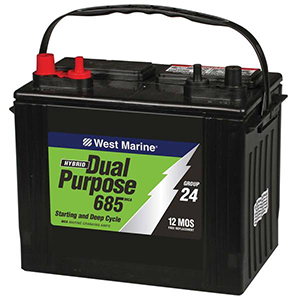 With large, thick plates containing more antimony than starting batteries and an active lead paste chemistry, dual-purpose batteries are a good compromise, tolerating deep discharges that would ruin a typical starting battery. Since they have lower storage capacity than comparably-sized deep cycles, we recommend them for the following applications:

At West Marine, you can choose from among four different battery chemistries: Flooded lead acid, gel, AGM (Absorbed Glass Mat) and Lithium Iron Phosphate. We suggest you select the battery chemistry based on your needs (deep cycle versus starting versus dual-purpose) and on the performance you desire balanced against your budget.

Other Articles on Batteries

Are Lithium Batteries a Good Choice for You?

Flooded batteries require periodic inspection and the cells must be topped-off with distilled water when levels get low. Since flooded batteries are not sealed and allow excess hydrogen to escape, they handle overcharging better than gel and AGM batteries. They self-discharge at a higher rate (6 to 7 percent per month) and thus require off-season charging. Wet cells must be installed in an upright position and don't tolerate high amounts of vibration. Their initial cost is lower than similarly sized AGM or gel batteries, and MUCH lower than the new type of lithium batteries. Properly charged and maintained, wet cell deep-cycle batteries are capable of between a few hundred and over a thousand charging cycles. 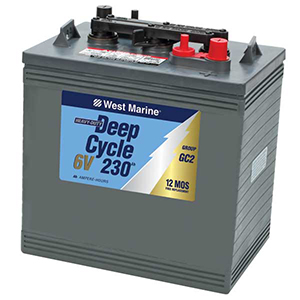 Sealed, valve-regulated (SVR) gelled-electrolyte batteries offer advantages over regular flooded batteries. They self-discharge at only three percent per month, handle the highest number of lifetime charging cycles, are maintenance free, spill proof, submersible and leakproof.  A pressure release valve keeps their internal pressure at a slightly positive level, but they can release excess pressure if needed. The SVR design nearly eliminates gassing, so they are safer to install around people and sensitive electronics (but gel and AGM batteries still need to be vented). Gel batteries, because they're sealed, are manufactured to very high-quality standards. They need carefully regulated smart charging to prevent damage.

More boaters are switching to this type for a performance improvement over flooded batteries. Sealed, valve-regulated AGM (Absorbed Glass Mat) batteries feature fine, highly porous microfiber glass separators compressed tightly between the battery's positive and negative plates, which are saturated with just enough acid electrolyte to activate the battery. During charging, precision pressure valves allow oxygen produced on the positive plate to migrate to the negative plate and recombine with the hydrogen, producing water. In addition to providing equal saturation across the entire surface of the battery's positive and negative plates, the fibers in the dense glass mats embed themselves into the plates' surface like reinforcing rods in concrete, providing more plate support and better shock and vibration protection than in conventional batteries. 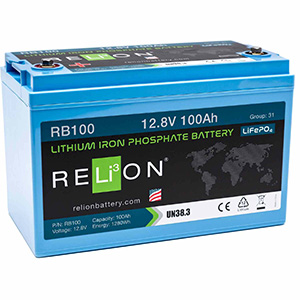 New technologies will require new ways of thinking about your boat's battery system. RELiON Lithium Iron Phosphate Batteries (Now offered by West Marine) are among the most advanced marine batteries in the world. Compared to flooded, gel or AGM batteries, which should only be discharged down to 50 percent of their capacity, RELiON batteries can discharge up to 80 percent of their capacity—which equates to 60 percent more usable power! They also can be recharged at a faster rate and weigh less than half their flooded, gel or AGM counterparts. It gets even better: Compared to the roughly 500 discharge/charge cycles of a typical Group 31 AGM battery, Lithium Iron Phosphate batteries can be cycled up to 3,500 times. All of this performance does come at a cost. For an expanded discussion of how lithium batteries differ from their flooded, gel and AGM counterparts—and how they can pay for themselves over the long haul, please read our West Advisor article Are Lithium Batteries a Good Choice for You?

Can lithium batteries be used for engine starting?

What Battery Ratings to Look For

Starting functions: The amount of power available for cranking a starter is measured several ways.

CCA vs. MCA: The two common power measurements are CCA (Cold Cranking Amps, the number of amps a battery can deliver for 30 seconds at 0°F while maintaining its voltage above 7.2 volts) and MCA (Marine Cranking Amps, similar but measured at 32°F instead of 0°F). The reason that MCA are 20–25% higher than the CCA is because batteries work better at higher temperatures.

Reserve Minutes indicate how long a battery can sustain a load of 25 amps before it drops to 10.5 volts. A battery rated at 150 minutes can operate a 25A load for 2 1/2 hours (at 80°F). Starting batteries aren't used to handle loads for long periods, so reserve minutes are less critical.

Size: Engine size, type, and ambient temperature determine what size cranking battery you need. High cranking power (and a larger battery) is required for cold temperatures, diesel engines, or large and high compression gas engines. The first sizing criteria is to meet the minimum CCA (if any) stated by the engine or boat manufacturer. If a Group 24, 550 CCA battery worked well for five years, we'd recommend replacing it with a similar model. If, however, it cranked too slowly or failed after a season or two, we'd suggest that you look for a battery with a higher CCA or MCA rating.

Deep cycle functions: Battery capacity measurements are commonly expressed in Amp-hours  (Ah) and Reserve Minutes. Amp-hours measure the total amount of energy that a battery can deliver for 20 hours at a constant rate of discharge before the voltage drops to 10.5 volts. This means that a 200Ah battery can run a 10A load for 20 hours. The reserve minute rating is the number of minutes that a battery can run a 25A load until dropping to 10.5V, just like with starting batteries. A Group 27 deep cycle battery with a rating of 180 reserve minutes will run a 25A load for three hours. House loads range from 5A to 25A or more. Amp hours is generally the more relevant measurement for house banks.

Longevity: Battery manufacturers measure longevity by discharging full batteries at a temperature of 80°F until their voltage drops to 10.5 volts. The batteries are recharged under controlled conditions, and the process is repeated until the battery fails to hold half of its rated capacity.  This measurement, called cycle life, shows how many discharge cycles a battery provides over its lifespan.  This ability to cycle repeatedly is what differentiates deep cycle batteries from starting batteries, which can't withstand more than a few deep discharges before they begin to fail. If nothing else, cycle life provides a baseline for comparing one battery to another.

No matter what kind of battery chemistry you choose, follow the manufacturer's recommendations to get the best performance. Note: The following recommendations apply to flooded, gel and AGM batteries. To understand the special considerations that apply to lithium batteries, be sure to read our West Advisor article Are Lithium Batteries a Good Choice for You?