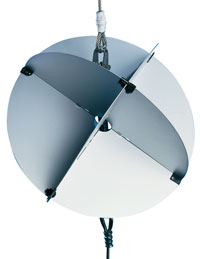 What Radar Reflectors Do

Radar Reflectors (more accurately called Radar Target Enhancers, or RTEs) reflect radar energy from other vessels’ radars so that your boat shows up as a larger and more consistent “target.” If you operate your boat in areas with shipping traffic or where fog and low visibility are common, the ability to be seen by radar-equipped ships can make the difference between being seen and being sunk.

RTEs work by reflecting radar energy directly back to the radar antenna so that your boat appears to be a larger target. The best analogy we can think of is the reflective “dots” on many highways that make it so much easier to see where the lanes are. These light reflectors use small triangular-shaped prisms that bounce the light around and reflect it precisely back at its source.

The effectiveness of an RTE is disproportionately related to its size. Assume that you have three theoretical reflectors of the same design, but of different sizes. Look at how rapidly the RCS (Radar Cross Section) increases with size. The RCS of a given reflector goes up by the fourth power of the radius, resulting in this dramatic increase in effectiveness. For example: a reflector of twice the size of a similar but smaller model has a RCS that is 16-times larger. Moral: buy the largest RTE you can, based on your budget, windage, weight, space available, and aesthetic judgment.

West Marine tested radar reflectors in 1995, lead by Chuck Hawley along with experts Stan Honey, Dick Honey and Jim Corenman. Although 1995 was a long time ago, the tests are still relevant and interesting, because just about all of the products and technology are unchanged. Note: Most of the RTEs tested in this study are not currently offered by West Marine. As of May 6, 2021, West Marine's selection of RTEs consists of 2" and 4" diameter radar reflector tubes by Plastimo and the octahedral Echomaster series by Davis Instruments.