Maintaining your marine sanitation device can be an onerous task, but this need not be the case since problems that arise have more to do with owner neglect than anything else. Sure, sometimes components like Y-valves, macerators, holding tanks or even an entire system must be replaced; but squarely facing these problems is a lot better than avoidance, especially when you consider the convenience that a properly installed and maintained system brings to a boat. This article will acquaint you with typical installations, system maintenance and laws that govern marine sanitation system use.

All boats operating in US waters with permanently installed toilets are required by federal law to have a Marine Sanitation Device (MSD) on board that either stores human waste until it can be transferred ashore, or reduces the coliform count to such low levels that discharged sewage poses no public health hazard—even in populated harbors. While the MSD must satisfy Coast Guard regulations, the boat owner still has a lot of choices of product types and overall system design. 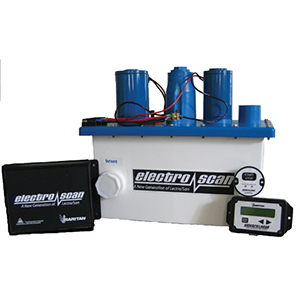 The Raritan Electro Scan utilizes electrodes which temporarily convert salt water into a powerful bactericide. The treated wastewater then safely and conveniently reverts back to its original state of salt and water which meets EPA Type I standards for overboard discharge.

A rapidly increasing number of coastal areas have been designated as No Discharge Zones. To qualify under the federal Clean Water Act, states must show that sufficient pump-out facilities exist for boaters to empty holding tanks. In Michigan, New Mexico, Rhode Island and Vermont all waters are no discharge. There remains considerable opposition to NDZs from boaters who feel both inconvenienced and unfairly singled out as sources of pollution (miniscule compared to typical sewage treatment overflow following rainstorms, runoff, and industrial effluents), but the political tide definitely favors the proliferation of NDZs.

There are a variety of ways to deal with waste on board, including recirculating, composting, and incinerating toilets, but by far the most common are toilets plumbed to holding tanks. These range from the simple and inexpensive self-contained heads (portable potties) to fairly complicated systems incorporating multiple valves, pumps and hoses. Any way you look at it, carrying around sewage is necessary.

While pumping raw sewage is not illegal offshore, you need an approved MSD for inshore and inland use. Direct discharge is foul, and—inside the three—mile limit, illegal. Don't operate your head without a means to contain or treat waste on board, and in foreign countries don't pump your waste overboard within 100 yards of the beach. This is harmful to swimmers and those who eat the local fish and shellfish. Just because the hundreds of Caribbean charter boats have little, if any, sewage treatment systems on board doesn't mean it's okay for the rest of us to dump in the otherwise pristine waters regularly used by snorkelers and swimmers.

This is a solution for thousands of "weekend" or trailer boats that need a way to hold small amounts of waste (usually limited to six gallons). They aren't fun to take on shore and dump (usually in a marina toilet), but they eliminate the need to install permanent plumbing, are almost impossible to clog, and are inexpensive. If you add a deodorizing chemical to the tank, these heads are reasonably odor–free.

Holding Tank without a Self–Discharge Option

For areas with adequate pump–out facilities, a holding tank connected between your head's discharge and a through–deck fitting is a fairly simple, inexpensive installation, and meets the requirements of the law. We offer holding tanks as small as three gallons, although we strongly recommend installing a larger tank if you have the room. A full crew in party mode can fill a small tank in no time, especially if they are vigorous flushers (actually recommended to keep waste from collecting in hoses). The drawback with this method is that you have no place to go if your tank is full and you cannot find a pumpout station fast. Boaters on the Great Lakes, however, have been successfully living with these restrictions for decades, so it can't be that bad. 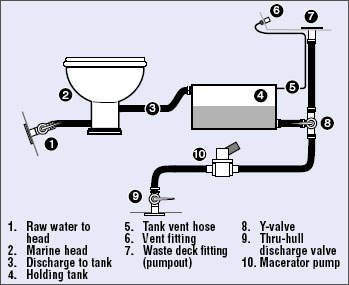 All of the waste is pumped into a holding tank, yet you have the option of pumping it overboard when legal and logical to do so. There's no Y–valve between the toilet and tank to upset authorities. Inshore and inland, the tank is emptied via the deck pipe. Offshore, you can empty the tank yourself using a manual or electric pump. A Y–valve downstream of the tank allows you to choose between the two.

As with most systems, a clogged valve or hose can make for an ugly service job. And you run the risk of not being able to use the toilet until the system is freed. A Y–valve between the toilet and tank solves that predicament (go ahead, get out the cleaning bucket!), but again could get you cited by the potty patrol.

On smaller boats, manual heads are most common due to their simplicity and low cost. But it has always amazed us that builders of even expensive yachts often install the lowest cost heads. Because toilet trouble at sea is extra nasty, we think this is one piece of equipment worth spending a little extra on. Here are some features to look for: 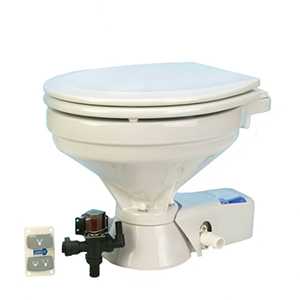 A lot of people scoff at electric heads as extravagant energy wasters. But because the electric pumps run so briefly with each flush, the total current consumption is actually quite low. The Jabsco Quiet–Flush Electric Head, for example, draws 10A, but with a 30-second flush cycle, total energy used per flush is just 0.15Ah. Advantages of electric heads include easier operation for inexperienced guests, and less chance of clogging because the built–in macerator evacuation pumps grind up waste and toilet paper before sending it to the holding tank.

All types of sanitation hose will eventually smell if sewage is allowed to stand for extended periods of time. We recommend only smooth interior wall hose because corrugated types trap waste and restrict flow. Rigid PVC does not pass odors but is more difficult to route and does not connect directly to pumps and thru-hulls. Still, it's possible to plumb part of the system with rigid PVC, switching to hose where necessary. The best hose for containing odors is SeaLand OdorSafe Plus, followed by Shields Heavy Duty Vinyl Hose (#148) or Super Head Hose (#101). All of these hoses are resistant to odor permeation.

To reduce the chance of sanitation hoses emitting a foul odor, be sure to flush the system after every use. Hoses should be installed without any low spots where waste can collect. Heating hose to fit over barbed adapters can dangerously weaken the hose. Instead buy fittings specifically made for 1 1/2" sanitation hose.

Using your limited supply of fresh water to flush the head seems like a ridiculous waste, but electric heads from Jabsco and SeaLand use very little water—some models as little as a pint or two. And freshwater flushes greatly reduce bad odors in the system caused by all sorts of microorganisms dying and decaying in the bowl—plankton, krill, you'd be surprised!

A common cause of boat sinkings is from backflow created by siphons in the head and engine seawater intake hoses, and head discharge hose. Vented loops installed in the hose above the waterline prevent siphons from occurring and don't impede normal flow. They're usually mounted against a bulkhead. We sell both bronze and Marelon models.

Thick-walled (1/4" or thicker) high-density polyethylene tanks are the most sensible choice. They are light, won't corrode and are much less expensive than metal or fiberglass tanks. While thinner wall tanks rarely burst, they can bulge so much that fittings are stressed to the point of leaking. Your nose will alert you, but it's safer to buy a quality tank in the first place. We sell Todd and SeaLand tanks in various wall thickness. Taller, narrower tanks can be emptied more completely but are more difficult to secure. Plumbing attachments should be as low and as high on the tank as possible. Flexible tanks can be used when spaces are oddly shaped or inaccessible but they lack the odor resistance and strength of rigid tanks so we don't recommend them for waste.

We feel the best Y– or diverter valve is made by Whale, in part because it has a center position that closes both ports. Other brands, however, may integrate into your plumbing more conveniently depending on the direction your hose runs. The Bosworth Y–valve can be surface–mounted so that you don't have to climb into a tiny locker to change directions. Forespar's Marelon valves are very strong, and Jabsco valves can be adjusted to a variety of configurations and are lockable for USCG inspections.

Discharge pumps are used to empty the holding tank overboard. We recommend large diameter diaphragm pumps because they are the least likely to clog. The Whale Manual Waste Pump is the best choice among non–electric pumps. Unlike aluminum-body pumps, its plastic body won't corrode. Macerator pumps, such as those by Jabsco and SHURflo, grind waste for easier passage through the sanitation system. When used as discharge pumps (from holding tank to overboard) be very careful to monitor the tank level because they can burn out pretty quickly if run dry.

A more durable solution for pumping holding tanks is the SeaLand T Series Discharge Pump diaphragm pump, which can be run dry without damage, or the Whale Gulper pulverizer toilet pump, which can handle solids up to 1 1/2".

Be sure your seacock is open before trying to pump out the tank. When an electric pump tries to pump against a closed outlet its valves can sometimes become inverted which requires a sewage "project" and even if the pump isn't damaged, you could cause a rupture in the system.

Tank level indicators reduce the risk of overfilling the holding tank, which can push sewage out the vent line, or, if that line is clogged, rupture the system elsewhere. Mount monitors near the discharge pump switch so you can empty the tank as soon as you determine the tank is nearly full.

One way to prevent holding tank odors is to encourage the growth of aerobic bacteria with increased ventilation. On most small boats, tank vents are 5/8". Ensuring that the hose that leads to the tank vent is not obstructed is a start. Another option is to increase the size of the vent and even to locate larger holding tank vents on both sides of the boat to create cross ventilation. While this is a sound idea, it may not be practical for many boats.

This leads us to the alternatives, which are head and holding tank treatments that employ a variety of methods to mask or eliminate offensive odors created as waste is broken down. For more on these treatments, see Head and Holding Tank Treatments.

Let's All Do Our Part

Marine sanitation has come a long ways since the days of cedar buckets. Joshua Slocum would probably have found the idea of carting waste around in a holding tank ridiculous. However, Slocum was just one person, who in the course of being the first mariner to sail singlehandedly around the world would have produced an immeasurably small effect on the environment. Today, there are thousands of cruisers crisscrossing the seven seas. Creating and maintaining a sanitation system isn't hard and we owe it to each other to leave a clean wake.