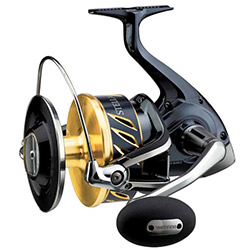 The Stella SW 30000 spinning reel from Shimano is built for ocean use and is powerful enough to pull in bluefin tuna.

If you think that spinning reels are only good for surfcasting or for use as light tackle when casting for panfish, bass and trout, think again! From finesse fishing for bass with light tackle to pulling in large bluefin tuna, spinning reels hold their own in many different fishing styles, making them popular with many anglers. While spinning tackle will never replace the heavy-duty gear required to consistently land big offshore fish, ease-of-use is what makes spinning tackle a popular choice.

Spinning reels are mounted on the underside of the rod with the axis of the spool parallel to the rod. The spool remains stationary when the line is cast and eliminates the possibility of backlash, which can occur when the spool of a baitcasting or conventional reel spins faster than the line can come off, creating a “birds’ nest” in the line. No possibility of backlash allows the angler to focus more on the direction and distance of the cast. A stationary spool also means that there is little initial resistance when casting, which enables spinning reels to excel with light or “weightless” lures and cast farther than other styles of reels.

Spinning reels are not completely free of line tangles though as line twists are a common woe for anglers using spinning setups. You can reduce line tangles by stopping the line with your hand when the lure hits the water, closing the bail manually rather than by turning the reel handle and changing out old line that has formed a memory of being wrapped around the spool. Tying a swivel to the line close or attached to the lure can also minimize line twists when retrieving the lure.

Luckily, these preventative measures can be learned quickly, allowing beginners to learn to cast with a spinning reel faster than with a baitcasting reel.

The features that make spinning reels easy to use can also cause drawbacks. Since the spool is stationary the line spirals off the spool making loops and twists in the line. The line twisting during the cast makes the cast less accurate when compared to a baitcasting reel. Giving crankbaits, buzzbaits and other specialized lures the action they need to attract fish can be difficult with a spinning reel since spinning reels often have lower gear ratios and line speeds than baitcasting reels. Buzzbaits have to be reeled in fast to stay on the surface and the slower line speed on spinning reels means the angler has to crank faster and will likely tire out faster.

What to Consider When Choosing a Reel

Where you fish and what you are fishing for will be the main determining factor of what style and size reel you need. Personal preference will play a role as well, but make sure that the reel you choose is suited for your needs.

Needed for Freshwater or Saltwater Use?

Saltwater corrodes reel components faster than freshwater does and if you plan on using your reel for ocean or surf fishing it will need to be specially made for the task. Sealed gearboxes, drag systems and corrosion resistant or shielded bearings are essential to prevent corrosion and avoid rough action of the reel or drag system. Reel bodies are susceptible to corrosion as well and must be considered if the reel is used at sea. Graphite reels are generally less expensive than aluminum and won’t corrode in saltwater environments, but are also less durable and won’t stand up to as much pressure compared to aluminum reels.

Spinning reels are available in a variety of sizes for different fishing styles and needs. From small reels for catching small, freshwater fish to larger spinning reels for surf fishing and heavy saltwater applications such as tuna and other game fish, whatever you’re after you can likely find a spinning reel that will work.

Parts of a Spinning Reel 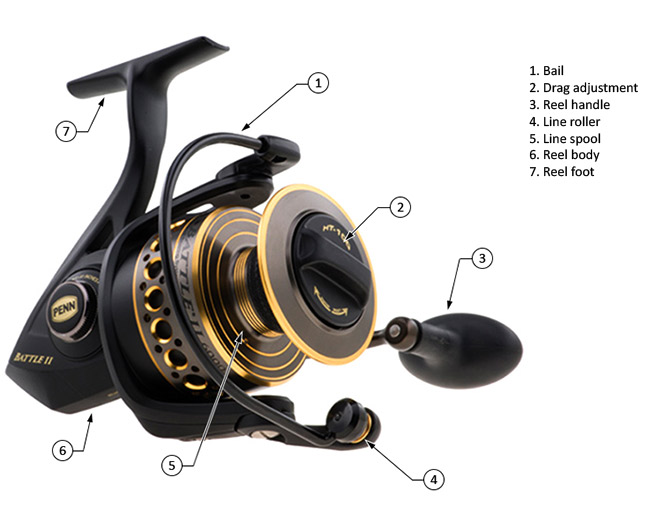 The gear ratio of a spinning reel indicates how many times the rotor revolves for one rotation of the handle. A 6.2:1 gear ratio means that the line will wrap around 6.2 times for every one handle rotation. It is important to check both the gear ratio and the line speed of a reel because a higher gear ratio does not directly relate to higher line speed. Line speed is determined by the combination of gear ratio and the diameter of the spool. Gear ratio and line speed of spinning reels vary, but many reels fall between 4.8:1 and 6.2:1. These ratios work well for most types of fishing, however, if you plan on tossing crankbaits, buzzbaits, and other lures that require a fast retrieve, you might consider a baitcasting reel which often have high gear ratios of 8.1:1 or more.

The line capacity of a reel is the maximum length of line that the spool can hold without overloading the reel. The diameter of fishing line increases along with its strength, which means that higher test line takes up more space on the spool. For example, a reel that holds 160 yards of 30-pound test monofilament might only hold 120 yards of 40-pound test or 100 yards of 50-pound test. Most reel manufacturers list line capacities for both monofilament and braided lines. Braided line capacity is generally higher than monofilament. This is because braided line is made from materials such as Dacron and Spectra fiber that can achieve higher test in smaller diameters compared to nylon. When selecting a reel, consider the size of the fish you will be fishing for and match the line capacity accordingly. For more information on fishing line make sure to check out our West Advisor on Selecting Fishing Line. 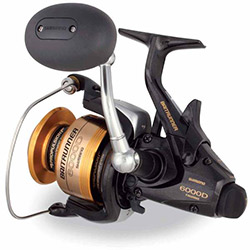 The Baitrunner reel from Shimano features a secondary rear drag to allow live bait to swim with the bail closed.

All fishing reels have an adjustable drag which consists of an adjustment point and metal drag washers typically separated by carbon fiber or felt washers to reduce friction. The purpose of the drag is to moderate how much force can be put on the line before the spool will slip and let out more line. A general rule of thumb is to set the drag at 20 to 30 percent of the breaking strength of the line to avoid breaking the line while playing a fish. For example, when using 20-pound test the drag should be set between four and six pounds. You can easily check your drag setting with a hand-held spring scale.

Spinning reels have front or rear drag systems or a combination of both. Rear drags can be easier to adjust when playing a fish but often have less max drag than front drag styles. On combo reels like the Baitrunner or Thunnus from Shimano, the rear drag works as a secondary drag system that allows bait to swim free with the bail closed. When a fish grabs the bait the secondary drag still provides some resistance. The angler can then reengage the main drag to set the hook and play the fish.

The more ball bearings a reel has the better, but the quality of the bearings is important as well. Anti-rust or shielded bearings are necessary if the reel will be used for ocean or surf fishing. If saltwater gets into ball bearings, reel action will be rough and if saltwater or sand gets into the drag system it will not operate consistently or smoothly.

Anti-reverse prevents the handle from turning backward and allows line to be reeled in but not let back out. The anti-reverse on some spinning reels can be disengaged to allow the angler to spin the reel backward to let line out while keeping the bail closed.

If you already have a rod that you are planning to use, make sure that your new reel will be compatible with it. A single rod and reel combo will not work for all applications, but your reel and rod must match each other meaning that they must be designed for the type of fishing you intend to do and your target species. Just like reels, rods are rated for different line tests and using higher test line than the rod is rated for could damage or break the rod. Spinning rods also behave differently than other rods and have more flexible rod action, which provides less force when setting a hook but can aid in finesse fishing. Baitcasting rods are stiffer compared to spinning rods and have more backbone which provides more force when setting a hook. This means that the debate between different reels does not come down to the reels alone, but the reel and rod combination that will work best for your style of fishing. To simplify this process we offer already assembled rod and reel combos for a variety of different fishing types.