What VHF Radios Do

ICOM's M605 is a state-of-the-art fixed mount VHF with a full keypad, hailer, GPS receiver, NMEA 2000 connectivity and last call recording. One version is available with an integrated AIS

VHF (Very High Frequency) radios provide two-way communication and have a range of 5 to 30 miles. They are, arguably, the most important safety item onboard your boat, and are far more reliable than a cell phone, with its limited on-water range and dropped calls. In coastal or inland waters, a VHF radio is generally the fastest link to rescuing agencies like the Coast Guard, a towing service or the harbormaster. Other uses include conversing with other boaters, listening to weather information and alerts, calling the race committee or communicating with a lock or bridge operator.

Line of sight signals: Unlike Single Sideband or shortwave radios, VHF radios transmit and receive line of sight signals. Mountains, land masses, the curvature of the earth or anything else that blocks vision in a straight line will also block VHF signals (although they do have the ability to “bend” around objects in a limited way).

Maximum power: Fixed-mount radios are legally limited to 25 watts of transmit power. All have the option of transmitting at one watt of power so that short-range conversations are less likely to interfere with large numbers of boaters. It’s a good idea to try to reach your party on one watt before switching to 25 watts.

Channels: All VHF radios have the same 55 channels with U.S., Canadian and International menus (your radio has a U/I/C option). Boaters can listen to any of them, but most are reserved for government, commercial shipping or Coast Guard use. You can transmit on about 12–15 channels.

Antenna: Your antenna installation is the most important variable affecting the operating range of your VHF. Mount your antenna as high as possible—on the mast of a sailboat or on the superstructure of a powerboat. Use an antenna with 6dB or 9dB gain on powerboats and 3dB gain on sailboats (see the West Advisor on Selecting a VHF Antenna. Use large-diameter, low-loss coax cable with properly installed connectors and run it as directly as possible to the radio.

Battery power: Fixed VHF radios receive power from your boat’s battery bank, so your operating time is essentially unlimited, because they draw about half an amp while receiving, and about five amps while transmitting at maximum 25 watt power. The only problem is that, if your battery system goes dead, so does your VHF radio. A handheld VHF is thus an important backup in an emergency. 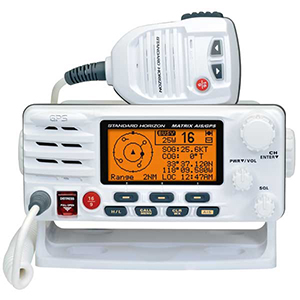 All fixed VHF radios include Digital Selective Calling capability, which is part of the international protocol of safety procedures in the Global Maritime Distress Safety System (GMDSS). DSC provides handy non-emergency functions, allowing you to communicate individually with another boat or group of boats. You can privately send and receive positions (referred to as Position Request or Position Polling) with your buddy boats to rendezvous at that secret location where the fish are biting, for example.

What’s more important are DSC’s emergency capabilities—functioning like a sort of coastal EPIRB. In an emergency, one push of a button causes your radio send an automated digital Mayday message on VHF Channel 70, which can be received by the Coast Guard and all other vessels within radio range. The Channel 70 MAYDAY transmission incudes your vessel ID number (called an MMSI Number), your position and the nature of the emergency (undesignated, fire, flooding, collision, grounding, capsize, sinking, adrift, abandoning, piracy, MOB). After this information has been sent, the radio automatically switches to Channel 16 for voice communication with rescue personnel.

All DSC radios sold since March 2011 (Class D radios) have a separate “watch standing” receiver that constantly monitors DSC Hailing Channel 70. The radio’s other receiving channel is free to listen to any other channel. Radios built to these standards also include additional features including added memory to store other vessels’ MMSI numbers. Older radios may only have one receiver; consequently you could miss an emergency call while listening on a different channel, or you may not have DSC at all.

The Coast Guard has upgraded their coastal Search and Rescue capabilities with modern digital electronics known as Rescue 21. Rescue 21 eliminated gaps in VHF coverage over the entire coastal US, the Great Lakes and some major rivers, allows accurate, precise triangulation of the location of Mayday signals within 20 miles of the coast, and allows enhanced digital recording and playback of distress calls. As of 2015, it covered 41,871 miles of coastline in the Continental United States (see coverage map). 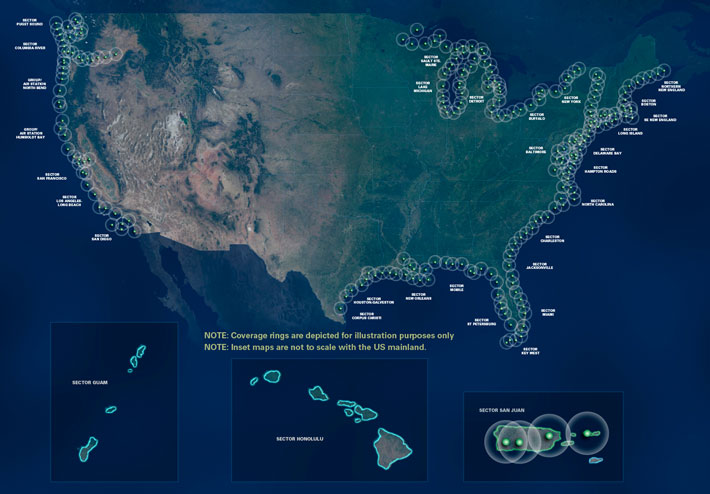 The Coast Guard’s Rescue 21 emergency network makes your VHF radio equivalent to a sort of coastal EPIRB. If you have properly connected your VHF to a GPS receiver and have registered with an MMSI Number, the Coast Guard will know who you are, where you are and the nature of your emergency.

Rescue 21 only works if you set up your radio correctly. You need to take two actions to get the safety benefits of DSC:

See our West Advisor on Enabling Your VHF Radio’s Safety Features for more on how to do this, and why it is of critical importance in an emergency.

Black box designs: ICOM’s M400BB is a space-saving alternative, with a modular design that positions the guts of the radio in a remote, sheltered location, with only a small handset and speaker panel taking up your valuable space on a crowded instrument panel.

VHF Radios with an Integrated AIS (automatic identification system) Receiver combines a black box VHF and AIS reciever to help you avoid collisions among crowds of AIS-equipped ships and other vessels. It allows you to keep track of current and previous positions of all your radio contacts on your compatible Raymarine chartplotter.

Many radios can use one or more optional full-function microphones that even include a channel display. Change channels, change volume levels, add or delete channels from the scanner's memory—all are possible from the keypad included in these miniature second stations that are ideally suited for the flybridge, tuna tower, navigation station, cockpit, or wherever you can use VHF communications.

Second stations are a good alternative to keeping a less-powerful handheld VHF at a second location. These remotes use the full power of the fixed-mount radio (25 watts) and the effectiveness of a full size antenna to ensure that you have excellent range.

The inclusion of a hailer is one of the upgrades from entry-level to higher end radios. The installation requires an external waterproof speaker to broadcast your voice to line handlers, other vessels, or your first mate on the foredeck. A feature called Listen-Back turns any speaker into a microphone and amplifies faint sounds (although most speakers make lousy microphones) enabling you to communicate with that foredeck hand or listen for fog signals.

Some radios include a foghorn that broadcasts over a PA a variety of signals that are legally required when operating in reduced visibility. These may include "underway", "stopped", "sailing/fishing", "under tow", "at anchor", "aground" and others. 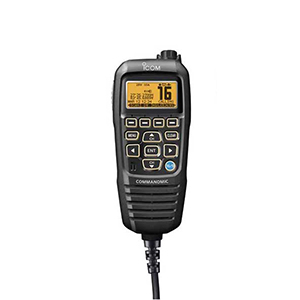 Soft-key interfaces use three or four multiple-use keys to perform many tasks on radios that are more feature-laden. Toggle between software key functions. ICOM’s new family of radios (the M424, CommandMicIV and handheld M92), Garmin’s GHS 20, and Standard’s GX1600/GX1700 all share this approach.

Multi-function rotary knobs are quicker than keys when changing a function. The knobs on the Garmin GHS 20 and ICOM COMMANDMIC III control channel, volume, squelch and other features.

UP and DOWN keys, the other typical alternative, can be held down to move from one channel to the next in rapid succession. Most radios now have channel selector buttons on the microphone as well as on the radio itself. We like the convenience of this feature. All VHF radios have a special button that immediately selects emergency Channel 16.

Noise-canceling microphones reduce background noise so you can hear and be heard more clearly. If you are in a fast, open-cockpit boat this is a valuable feature.

AquaQuake™ water draining function on some ICOM radios clears the speaker of water, emitting a vibrating noise, so the audio is less distorted in really wet boating situations.

Virtually all radios now have several scanning options, so this has ceased to be a reason to buy one radio over another. There are variations on this theme, however, and you should become familiar with the terminology.

Dual Watch or TriWatch allows you to monitor a working channel, like VHF Channel 72, and then pop back to VHF Channel 16 to check for traffic every two seconds or so. This is related to the requirement that mariners maintain a watch on Channel 16 so they can go to the aid of someone broadcasting a Mayday, as well as to listen for their vessel being hailed by another boater. TriWatch adds VHF Channel 9 to the scan list, which can be a hassle in areas where VHF Channel 9 is used for fishing chatter. In any case, virtually all radios have Dual and/or TriWatch.

Tag Scan allows you to select any number or combination of channels to monitor. Most radios also offer this feature.

Fixed VHFs feature automatic weather alerts, which notify you when they detect a special weather warning signal from NOAA, to inform you about thunderstorms, tornados or other extreme weather. When the radio detects a special warning signal from NOAA, it sounds a special tone. Some radios include an improved weather alert function, Specific Area Message Encoding (SAME), so you only have to listen to alerts for localized weather in your area, and not be interrupted by forecasts from many miles away.

Virtually all radios have a jack or connection for an optional external speaker. This can make it far easier to hear the radio in a noisy environment like engine noise in the cockpit, or wind or water noises.

Lots of boats are on the water and in some areas boaters have difficulty finding a clear frequency, with interference from signals on adjacent channels making it hard to hear messages. Many metropolitan areas have radio frequency interference from lots of sources. Some radios offer better performance in filtering out RF signals, referred to as intermodal rejection, that is, how well the radio hears only what it is supposed to hear. Generally, modern VHF radios have increasingly sensitive receivers.

Another problem happens when boaters near you can pick up distant signals, but you can't. Assuming that your antenna, cable and coax connectors are in good working order (and with corrosion in a salt-water environment, this is a big assumption), you may have a problem with the sensitivity of your receiver, how well the radio hears or how strong the signal must be to be heard.

We include these two specs, under the heading of Receiver Performance, for the radios we sell. Rejection is measured in decibels. Bigger numbers are good and mean that the radio in question can filter out stronger nuisance signals.

Sensitivity is measured in microvolts (µV@ 12dB SINAD), and smaller numbers are superior. Remember that the type and quality of your antenna and its height above the water are the most important factors in receiver performance.