Your VHF radio is the primary way for you to communicate with other boat operators or a bridge tender, lock operator, harbormaster, race committee, and rescuing agencies like the Coast Guard or a towing service. Arguably the most important safety item onboard your boat, a VHF radio is far more reliable than a cell phone which suffers from limited on-water range and dropped calls.

Rescuers like Vessel Assist, TowBoat U.S. and the Coast Guard monitor VHF transmissions, so it is easy to call for help in an emergency. Many boating authorities advise carrying both handheld and fixed mount VHFs, which are equally valuable onboard for their own unique sets of benefits.

Below are some selection questions for buying a handheld VHF radio.

Do you want a radio that floats?

If your radio goes overboard, a floating handheld gives you a chance to avoid a frustrating trip to the store for a new radio. Although floating radios are a relatively recent idea, most of the handheld radios we sell now float. Note that there seems to be a trade-off between lightweight, floating radios, and radios with big batteries and the longer battery life. Thus you may have to choose which feature you prefer—long runtime or a floating radio. ICOM has further enhanced their newest handhelds with their “Float ’n Flash” feature. These radios float face-up, and the screen, buttons and several LED lights on the base all flash on and off. Several Standard and West Marine radios include a similar feature, with a flashing red LED on the radio’s base. See the chart below.

How many hours of battery life do you need?

Handheld VHF radios with rechargeable batteries (usually Lithium-ion) generally operate from seven to 20 hours before the battery must be recharged. Battery life depends on the radio's physical size, which determines how big a battery it will hold, whether it transmits on the high- or low-power setting; and if the battery pack also powers a GPS receiver. In general, floating VHFs have shorter battery life than heavier, non-buoyant models. What matters most to many boaters is the answer to this question: will the radio operate all weekend without a recharge? 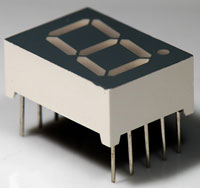 A seven-segment LED display with a decimal point. Photo: Wikipedia. 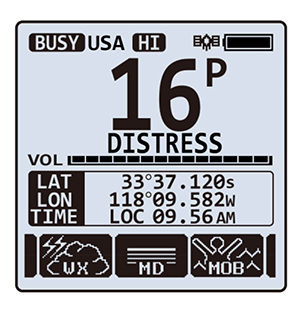 Does the radio have a dot matrix display?

Many radios use a seven-segment LCD display. As its name implies, numbers in seven-segment displays are composed of seven individual elements, and they create the type of chunky, rectangular numerals we’re all familiar with. Each part of the screen, such as the battery life indicator, has segmented components that perform just one function. Dot matrix displays are miniature versions of LCD screens seen on TVs, smartphones and other devices. They can display any monochrome pattern of dark and light elements, make choosing functions simpler, and allow rounder, more lifelike and readable numerals. Dot matrix displays are rated for screen resolution by their pixel count.

Do you want a built-in GPS receiver with Digital Selective Calling?

Several radios include a built-in GPS receiver, which you can use for navigation, providing your Lat/Lon position and allowing you to navigate to stored waypoints. These VHF/GPS combo handhelds include Digital Selective Calling (DSC), which functions as a VHF-frequency emergency beacon. Just push and hold down the red DISTRESS button on your handheld VHF radio, and it sends an automated digital distress message to the Coast Guard and all other DSC radio-equipped vessels. Rescuers instantly know who you are, where you are (using GPS coordinates), the name of your boat and the phone numbers of your emergency contacts.

DSC also provides non-emergency capabilities, allowing you to communicate individually with another boat or group of boats using MMSI numbers. You can send and receive each other’s positions as well if your radio and the other vessel’s radio are interfaced to GPS. While we’re excited by the promise of these features, we have not heard of many boaters using them—perhaps because the user-interfaces of the radios can make these features complicated and challenging to use.

To get the safety benefits of DSC you must obtain your nine-digit MMSI number. We recently purchased a Standard HX870, and it took about ten minutes to go on the BoatU.S. web site and register our new DSC radio. We logged onto //www.boatus.com/mmsi/ and followed the instructions. The registration is free, and by registering your beacon, you’ll be prepared in an emergency. 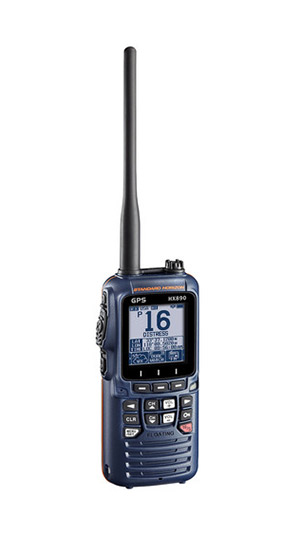 Standard Horizon HX890 has a 66-channel GPS receiver with many navigation functions. It also outputs NMEA 0183 for your autopilot.

Does the radio have especially useful accessories?

Even though new handheld VHF radios—especially high-end models—now include accessories that once had to be purchased separately, you still might find yourself longing for one particular piece that the manufacturer did not include with your model. Here is a short list of items we consider practical and useful for handheld VHF radios:

Drop-in chargers make it easier to keep the radio powered up, so it is ready when you need it. There are two types: slow chargers (9 to 15 hours) and rapid chargers (2 1/2 hours or less). Rapid chargers have voltage regulation and sensing circuitry to turn themselves off. This may not be the case with slow chargers. The best solution, in our opinion, is a fast drop-in charger base with interchangeable 12V DC and 120V AC power cords.

Alkaline battery packs let you use inexpensive, long-storage-life disposable batteries in your radio. They allow your radio to keep operating when you’re not able to recharge, and at 68°F, they still have 90% of their capacity after three years of storage. In emergencies, a spare pack of alkaline batteries can be a lifesaver.

Antenna adapters connect your handheld to the ship’s antenna. This extends the range of the handheld dramatically, and is an important safety feature should your fixed radio fail. The type of adapter varies with the brand of radio; most use a BNC connector, while others use a special connector. All provide male PL-259 threads for connection to the antenna coax cable.

Some companies also offer VOX or voice-activated transmission headsets, which means you don’t even have to press the PTT button before speaking. They, too, provide private listening.

What are the limits of range and power?

How much difference does increased transmit power make? Very little on the range of the communications. ICOM states that by switching from one watt to three watts of output you may gain 10 percent in range, but your battery life is dramatically reduced when you transmit at high power. The batteries in handhelds vary in capacity from about 500mAh to 2000mAh, and the current draw on high-power transmit can be in the two-amp range. This quickly depletes a battery if you talk a lot. Note: Radio manufacturers measure their battery life on a 90/5/5 basis: 90 percent standby, 5 percent receive, and 5 percent transmit at high power.

Do you want a multi-band radio?

By law, the fixed-mount and handheld VHF radios we sell are for marine use only. Several radios, such as the West Marine VHF95DB, offer additional bands, notably the Family Radio Service (FRS) band for local land communication. The ICOM M88 and Standard HX400 include programmable Land Mobile Radio (LMR) channels for land mobile communication.

Do you want weather alert?

Most handhelds feature automatic weather alerts, which notify you when they detect a special weather warning signal from NOAA, to inform you about thunderstorms, tornados or other extreme weather.