Selecting a Wakeboard, Wakeskate or Wakesurf 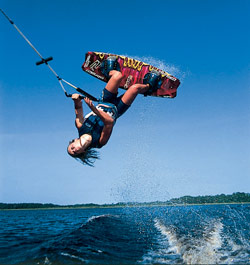 Not your dad’s waterskis!

New-style boards are all about excitement, action, air and adrenalin. Unique new mutations appear as fast as outside-the-box thinkers dream up crazy ways of riding a board behind the boat. We’ll sketch out several of the variants, beginning with the now-old-school wakeboard. See below for selection advice on wakesurfs and wakeskates. See also our Advisor on Selecting a Kneeboard.

Wakeboard bindings are mounted sideways instead of forward-facing like waterskis and can be adjusted for angle as well as placement on the board. Riders decide which “stance” to ride in, right foot or left in back. Popular wisdom has it that your dominant foot should be your back foot. The “Push Test”—someone pushing you from behind and your involuntary step forward indicates your dominant foot—has been used by boardriders since time immemorial. (People who don’t step forward and instead smack their faces on the dock probably shouldn’t be wakeboarding).

Wakeboarding borrows its stance terminology from surfing: a rider who has his right foot in back is said to be “regular footed,” left foot back is called “goofy footed.” Because of the reversible tips on a wakeboard, 180° rotations can be executed, allowing boarders to ride in reverse, a feat called riding “switch stance.”

How big of a board do I need?

Rule of thumb for wakeboard sizing: start with the idea that a 130lb. person uses a 130cm (50 11/16") board. Pretty easy, right? Then, add 2cm of board length for every 10lb. of rider weight. Besides rider weight, factor in rider ability when choosing a board. Larger boards give more stability and are better for beginners. More experienced riders prefer shorter boards that allow easier maneuverability and more advanced tricks.

The rocker of a board is how curved it is, or how much higher the tips of the board are from the middle when it sits on a flat surface. The style and amount of rocker is a key variable in how a board performs. Rocker usually varies somewhere between 2" and 2.5". More rocker makes surface spins easier and softens landings from aerial tricks, but it also makes the board slower.

Many wakeboards have what is called three-stage rocker. The board is divided into thirds, and the ends have considerable rocker, while the middle third remains flat. This tends to give a rider more lift off the wake for higher jumps, but also gives a harder landing. A wakeboard with continuous rocker is more predictable and gives softer landings. You may also see these terms used when describing rocker:

High-density polyurethane foam is injected into a mold and heated to form the core. The core is then wrapped with fiberglass, carbon/graphite or a combination of these, and the surfaces are saturated with an epoxy resin. Layers of either carbon/graphite or thick, high-density fiberglass mat are added to provide stiffness to different areas of the board.

Top and bottom layers are added, made of either PBT or Acrylan, and this is put into a mold in a heated press to bond the layers together and provide the board shape. Material options in this process determine the performance and price of a particular model. Carbon/ graphite is stronger, lighter and more expensive than fiberglass mat, and is found in high-end products.

Some manufacturers use strips of ABS plastic or laminated wood embedded in the foam core for additional stiffness; others offer boards with an aluminum honeycomb core. Aluminum core boards are lighter weight and stiffer, but are also much more expensive to produce. PBT tops (also referred to as ABS by some manufacturers) produce brighter, more colorful graphics, and resist scratches and dents better than other materials.

Hyperlite's Rebel 140 wakeboard has a lot of directional stability and is a good choice for riders of all skill levels.

Besides the type of reinforcing fiber and core, the other variable in this building process is how the manufacturer chooses to install the threaded inserts used to mount the bindings.

This third method (sometimes called snowboard-style inserts) is the strongest way of attaching bindings, although insert failure for any of the attachment methods is rare when bindings are properly tightened.

Hinge-style boots include a revolutionary rear-entry system so they’re easy to get into or out of. One of the hardest parts of wakeboarding is putting your boots on and taking them off. Hinge style boots offer unprecedented convenience, and they often have the best fit.

Another major difference in board shape is bottom design. Most boards have either channels or ridges running lengthwise along the bottom. These provide tracking and help keep the board going straight. This is especially important to get the board pointing in the right direction during deepwater starts, and for faster recovery when landing aerial moves. Some models have more pronounced fins molded into each side of the tips to help hold the board in the water during hard turns. This is a holdover from and improvement over the multiple-fin boards common a few years ago.

Wakeboard rails, or edges, determine how well the board performs in hard turns. Thinner rails, formed by beveling the edge or by pressing a thinner edge during construction, allow the board to sink deeper into the water during turns, giving the rider more control.

When wakeboarding began, boards with large fins, multiple fins, or both were common. Design was focused on keeping the boards moving in a straight line for slalom course turns or wake-jump landings. As the sport and rider abilities progressed, surface moves like powerslides and spins became popular, and multiple fins became an obstacle. Wakeboard design over the past few years has been focused on finding alternative bottom shapes like channels or ridges to provide control without sacrificing spinning ability. Increased rocker gets the remaining fins out of the water during surface moves. This said, wakeboards still rely heavily on fins.

When performing hard turns, the fin on the tail of the board is deep in the water and helps prevent the board from sliding out from under the rider. When landing a jump, the fins cut in first and straighten out the board to help the rider recover more quickly. Fins range from around 1.5" to 2.25". Larger fins are better for more aerial tricks where landing is important, while riders concentrating on surface moves should choose smaller fins. Those just learning to ride should choose larger fins for more stability and to help with deepwater starts. 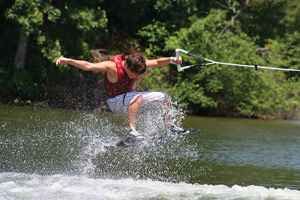 Wakeskates are cousins to the skateboard, and look like skateboards without wheels or trucks. Riders wear special water shoes and there are no bindings.

Sizing: select the length that best matches your weight. If your weight matches more than one size, you’ll get more maneuverability from a smaller skate, but stay on plane at lower speeds with a longer deck. 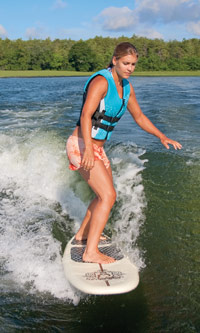 Note: Wakeskates should only be used behind boats with inboard engines.

Surf the wake of a slow-moving boat (compared to wakeboarding speeds) on a wakesurf.  They’re larger than wakeboards and are often used with no towline, once you are up and riding the wake.

Surfboard style wakesurf boards are the best for beginning/intermediate riders.

Freestyle boards are smaller, look more like a wakeboard, and are best for tricks, but more difficult for riding behind a small-intermediate size wake.

Note: Wakesurfs should only be used behind boats with inboard engines.