Antal Mini Snatch Block can be fastened with the Snap Ring (shown in the photo, sold separately) or a metal shackle.

Snatch blocks are one of the most useful rigging items to have on board because they can be placed on a line without reeving (threading) the line through the cheeks. One cheek opens up to accept a line from the side, so you don’t need the bitter end. Most snatch blocks also have a snap shackle, so you can move and attach them almost anywhere quickly. Today we have two styles, the traditional style of metal/plastic snatch blocks, and the modern “Loop Block” alternative, including blocks from Colligo, Antal, Karver and Equiplite.

These blocks use flexible loops, usually made from Dyneema, to take the loads directly through the center of the sheave. This allows the blocks to be extremely light (75% lighter than conventional snatch blocks with the same rated load) as well as more flexible than metal snatch blocks. They’re quite popular on larger performance racing boats, but work equally well for cruisers. 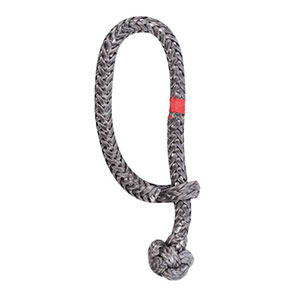 You can make your own snatch block quickly with our Dyneema SK-75 Soft Connectors. Just loop the very strong and durable line (rated at 10,000lb. breaking strength) through any appropriate block.

Snatch blocks are commonly used for quick rigging adaptations, not permanent applications. Turning blocks, deck-mounted blocks, jib fairleads, etc. all do their jobs better than snatch blocks. But snatch blocks shine when you want to change something already in place, like a jib sheet or spinnaker sheet.

Jib fairleads: varying wind conditions require you to “tweak” your headsail fairleads. You can point higher with a small jib if you can pull the lead inboard to narrow the sheeting angle or depower the same sail in too much wind by pulling the lead outboard. Changes in wind strength can require fore-and-aft changes in lead location. When your genoa sheet has loads of pressure on it and you can’t afford to tack to make adjustments, run the sheet through a snatch block and use it to take the load off the original sheet. Then you can adjust both sheets and move the fairlead to the new desired location.

Spinnaker sheets: spinnakers fly free of the boat, so it’s hard to anticipate exactly where to place their leads. Most boats have an afterguy block mounted at the point of maximum beam, and a spinnaker sheet block mounted a few feet forward of the transom. There will be times when you’ll want to use a snatch block to pull the sheet down to the rail to reduce oscillations downwind and to keep the sheet from abrading on the boom. You can also snap a snatch block on the end of the boom to increase the sheeting base on spinnakers (and high-clew headsails). 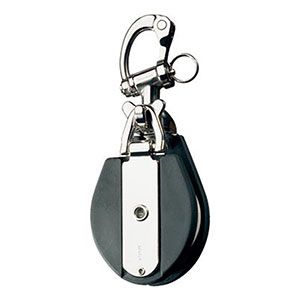 This snatch block from Ronstan has a trunnion which allows the block to pivot and maintain correct load orientation where shackle movement is limited.

Guide for anchor rodes: on boats with robust bow pulpits, you can snap a snatch block to the lower rail and lead an anchor rode through it to keep line off the deck and let the sheave reduce chafe. A snatch block can also make the anchor easier to retrieve by supporting the rode away from the topsides when weighing anchor.

Trunnion: a trunnion is a pivoting axis that allows the block to pivot on two planes to maintain correct load orientation where shackle movement is restricted, such as on a perforated toe rail or low-profile padeye. Standard (non-trunnion) snap shackles that align with the load freely are used for attachment to padeyes and bails.

While these are not always used as snatch blocks, blocks without sheaves are a new and interesting development. We used to think that ball bearings were the most efficient, lowest-friction way to make our line run freely through a block. Heck, some of us even remember when we bought our first set of Harken 001 Ball Bearing Blocks (the original Harken Block) for our mainsheet, and how ultra-slick these were. 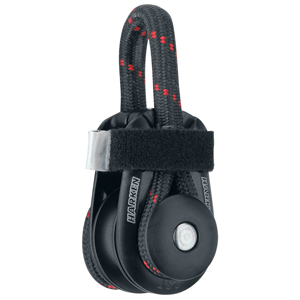 Blocks without rotating sheaves or any moving parts offer the advantages of the lightest weight, extreme reliability and, surprisingly, very low friction. They’re made from slippery hardkote-anodized aluminum and work best with low-friction Dyneema line (stuff that’s so slippery that it doesn’t hold knots terribly well, and actually runs more easily over the block as the load increases).