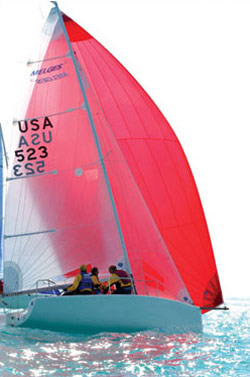 Many sailors who cruise and daysail look at spinnakers with suspicion, regarding them as frightening racing sails, about as welcome on the foredeck as a pissed–off 600lb. gorilla. We've always felt that constant learning keeps sailing enjoyable, and we also believe that getting to your destination faster is a good thing, whether you’re a racer, daysailor or a cruiser. Therefore, we’re going to discuss adding a spinnaker, the options regarding sail type, and some gear to make launching and taming this beastly device simpler. We assume that our audience is a daysailing or cruising sailor or couple with a Hunter 27, Catalina 30 or similar. We also assume that you are experienced in the basics and can handle your boat with some proficiency.

Spinnaker: The traditional spinnaker is a symmetrical sail, with either edge able to serve as the leading edge or luff, and is almost always used with a spinnaker pole. Most efficient type when sailing at deep downwind angles. 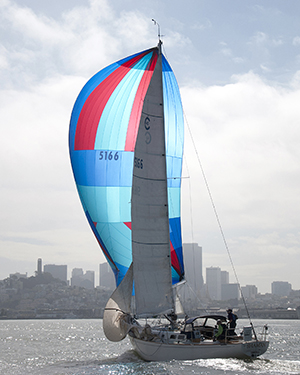 Nothing says “sailing” like a bright, colorful spinnaker, in this case, a 3/4 ounce symmetrical kite. Christine Weaver/NorCal Sailing photo.

Asymmetrical spinnaker or gennaker: Called by either name, this free–flying sail is attached at the corners like a symmetrical chute, and not along the luff like a genoa. However, unlike a traditional spinnaker, the luff is longer than the leach (the same edge is always the luff) and the maximum depth is closer to the luff. Typical sailing angles downwind range from 60° to 145° apparent wind. At broader angles than this, an asymmetrical can be set from a pole and pulled aft to avoid the blanketing effect of the mainsail, just like a traditional spinnaker.

Fixed–luff reachers/screechers/drifters: A somewhat nebulous category, these sails contain a low–stretch luff rope that acts as a headstay when tensioned with a purchase system. Often these sails are set on roller furling systems like Harken's Code Zero ot Facnor FX Code Zero. These are specialist sails, and often work best at sailing angles ranging from 50° to 110°. An upwind drifter replaces a regular genoa in light wind, as the name implies, and sets on the headstay.

A conventional cross–cut or tri–radial chute is perhaps the most effective way to increase your sail area (and speed) downwind, and is arguably the prettiest sail in a boat's inventory. A complete cruising inventory should ideally include symmetrical chutes, which set dead downwind more efficiently, since they can be rotated farther away from the mainsail's shadow. Most gear works equally well with an asymmetrical.

Spinnaker poles are almost always the length of the boat's J dimension–roughly the distance from the mast to the jib tack. Sailboats to about 24 feet typically use a 2" diameter pole; boats 24'–28' can use a 2 1/2" diameter pole; and boats to 35', a 3" diameter pole. Most sailors on boats to about 32' will opt for doing "end for end" jibes,where the pole leaves the mast during the jibe and re–attaches to the mast with the former outboard end. This requires a symmetrical pole with two piston or trigger end fittings. Larger boats perform "dip pole" jibes, which usually require different end fittings at each pole end as well as a separate foreguy (see diagram).

Secure storage in a convenient location keeps the pole readily available but safely out of the way. Chocks on deck or attached to stanchions are most common. Vertical storage on the front of the mast is becoming popular, keeping the pole in ready–to–deploy position (but it should be removed from the mast and stowed securely on deck or below during a storm).

Cars and Track on the Mast

Aluminum T–track and a car on the forward side of your mast is used to adjust the height of the inboard end of the pole. On small boats, a mast car with a pin stop is sufficient, but larger boats will place so much more force on the pole that you'll need an adjustment line with a purchase system to control the position of the inboard end. This requires a pole car with uphaul and downhaul bails, rather than a pin. Track sizes mirror what you'd use for jib lead track: 1" to about 30' and 1 1/4" over 30'. 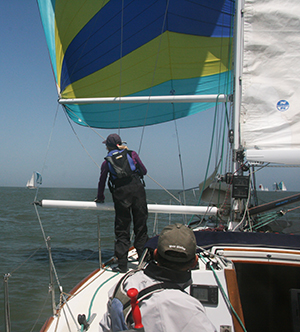 This boat is using both a spinnaker pole and a reaching strut. Struts are getting less common these days. This 50-year-old Cal 40 is typical of the big boats (dinosaurs?) that use this interesting pole. Photo by Kitty Hansen.

Spinnakers require a pair of sheets, like jibs, and two afterguys on boats that perform dip–pole jibes. We've used Ronstan snap shackles to connect spinnaker sheets for years, and they work well with the addition of a small lanyard. Big boats almost universally use Tylaska or Wichard shackles, but you have to use a tapered fid to release them under load. Really small boats (under 2,000lb.) can use a single set of sheets and Sister clips for attachment. This is a cheap, foolproof way to make fast connections to small spinnakers.

Spinnaker sheets, and afterguys especially, are a good place to use low–stretch line. This way, you can use smaller line, which weighs less. For light air sheets, consider sheets of Flight Line, which will absorb less water when it droops in the drink and not weigh down the clews. Other control lines can be Sta–Set braid, as low stretch is not as critical.

Snatch blocks have a multitude of applications on board, but they are especially helpful in taming chutes. By running the spinnaker sheet through a snatch block that is aft of the chainplates, you can control the oscillations of an unruly sail, prevent the sheet from chafing on the underside of the boom, and change the lead angle if necessary. Snatch blocks can also be used to lead afterguys back to the cockpit, or as an easily removable fore–guy block.

Once you get rigged, go out in light wind and practice, or set the chute at the dock, at anchor or on the trailer with a favorable five knot breeze. Keep the clews level on your symmetrical spinnaker. Raise or lower the pole so the sail luffs evenly from top to bottom. Practice sets, douses and gybes. It's fun! As you gain experience, you can fly the chute in increasingly breezy conditions.