Stop the Spread of Invasive Species

At War with Aquatic Invaders

Have you trailered to your favorite boating destination, and waited for your boat and trailer to be inspected before you are allowed to launch? Have lakes in your neighborhood been closed to all boating? We’ve experienced both of these annoyances, and wondered why they’re happening, so we did a little checking, and here’s what we discovered.

There’s a war going on in America’s waterways. Our lakes, bays and rivers are under assault from relentless foreign invaders—invasive aquatic species—and we’re fighting to protect our waterways, fisheries and our boats. This West Advisor will help you understand the stakes involved in the battle and what you, as a trailer boater, can do to help. We’ve relied on the experts for the facts, and you can find more details at protectyourwaters.net and ans task force.

Exotic plants and animals such as the zebra mussel, hydrilla and mitten crab can hitch a ride attached to your boat or trailer, or be transported as tiny larval young present in water taken in by your boat. Hitching from one waterway to another, these invasive aquatic species spread quickly and can become established in another lake, river or bay. They displace native species and block light needed by submerged native plants, degrading water quality. Once these invaders gain a foothold, it’s very difficult and expensive to get rid of them.

This lower outdrive unit is encrusted with thousands of zebra mussels.

Every body of water is a unique ecological system. While two lakes that are near each other may appear alike, they are actually quite different. In one body of water, a particular fish, aquatic plant or other aquatic life form may be an integral part of the system’s unique balance. However, when put into different waters, that same species may upset the delicate balance of the new system. When an introduced organism upsets this balance, it causes ecological or economic harm and is considered to be a nuisance species.

The most devastating species introduced to the U.S. have been from other countries. Zebra mussels, hydrilla and sea lampreys are examples of these species. However, even species native to the U.S. can become a nuisance when placed into the wrong environment. For example, crappies are excellent sport fish. In many lakes, they fit in well with the balance of the lake. However, in a wrong setting, the crappie could populate faster and out-compete native species for food and space. This could result in having a small lake with a lot of little crappie and little else.

In new surroundings, the out-of-place organisms are freed from predators, parasites, pathogens and competitors that have kept them in check. Once established, these non-native species can wreak havoc. 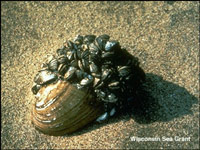 Invasive aquatic species can upset the balance of an ecosystem in a number of ways.

Not All Non-natives are Nuisances

Just because a species is not native does not automatically make it a nuisance. For example, fisheries biologists have introduced striped bass to many inland lakes across the country. This popular sport fish has provided anglers with added recreational opportunities and in most cases has not disrupted the balance of native species. As trained professionals, fishery biologists study an entire ecosystem of a water body before making intentional introductions. However, just because a type of fish is present in one water body does not necessarily make it okay for it to be in another one. Therefore, we should not take it upon ourselves to take fish from one lake and introduce them into another. 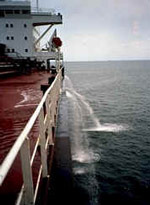 Maritime commerce: the largest source of aquatic hitchhikers is via transoceanic cargo ships originating at foreign ports. Some species attach themselves to the hulls of ships, while others are carried in ballast water taken on for stability by ships in foreign ports. When ships reach their destinations, the non-native species are released with ballast water discharge. Over the past century, as shipping time has become shorter with faster vessels, and as harbors have become less polluted, more species have been able to survive the journey and thrive when introduced into new waters.

Recreational boating and other water related recreational activities: Once established in some U.S. waters, nuisance species can be easily spread to more lakes, rivers and coastal resources by those who use the water. They hitch a ride on boats, trailers, fishing waders, scuba equipment or clothing, seaplanes, buckets used by anglers or even hiding in the fur of a swimming Golden Retriever. By following a few simple procedures, recreational users can easily eliminate their role in the spread.

Sportfish stocking: Whirling disease, a potentially fatal condition that manifests itself in young salmon and trout, is caused by a non-native parasite that infects the fish cartilage and nervous system. Ultimately, the parasite causes these fish to swim in a circular pattern making them susceptible to predation. Transmitted by infected stocked trout, whirling disease has damaged hatchery-reared fish stocks across the country as well as wild stocks in inland water of the United States.

Accidental releases from the Aquaculture and Horticulture industries, the Aquarium trade and the Live Bait business: Live bait species are routinely captured from Great Lakes waters and shipped to dealers on connected waterways as well as in inland regions. Commercial fish species such as white bass and freshwater drum are captured from Lake Erie and transported outside the watershed for stocking into lakes. This activity may have provided the pathway for white perch to enter the Ohio River Basin. Similar fish transportation activities likely occur in many other geographical regions. Water quality in these shipments is regulated carefully to insure product survival, raising the probability that nuisance species also could survive.

San Francisco Bay, a center of extensive international trade, hosts more than 234 introduced aquatic species. For nearly 150 years, this highly disturbed and vulnerable ecosystem has been exposed to continuous, large-scale introduction of non-native species through activities associated with commercial shipping and oyster farming. The importation of commercial oysters has allowed non-native species to hitchhike on the shells of oysters and packing materials shipped from the eastern U.S. coast and Japan. In the last decade, a new species has arrived about every 12 weeks.

In Chesapeake Bay, an area where large quantities of foreign ballast water are discharged, it is estimated that more than 120 harmful non-native aquatic species are established in the bay.

Ecosystems of Pacific and Atlantic coastal waters suffer from infestations of the European green crab, a harmful hitchhiker that preys on commercially valuable oysters and clams. In the Pacific Northwest, the list of introductions is growing rapidly due to ballast water.

In the Gulf of Mexico, the marine brown mussel, displaces native mollusks and threaten mangrove communities. Like the zebra mussel, the brown mussel encrusts hard surfaces. As its range expands, there is rising concern over the economic impacts that could result from fouling of water intake systems, shipping areas and offshore oil platforms.

Inland waters: Once introduced into the Great Lakes or coastal waters, many hitchhikers spread to inland lakes, rivers, wetlands and waterways by way of barges, recreational users, bait buckets, fish stocking and other human-assisted transport mechanisms. The zebra mussel, hydrilla, and others have taken great advantage of these opportunities to hitch a ride and have proved to be devastating to freshwater lakes and rivers.

What Boaters Can Do to Stop the Spread 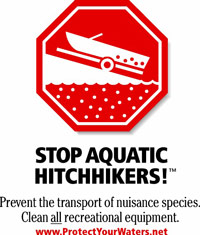