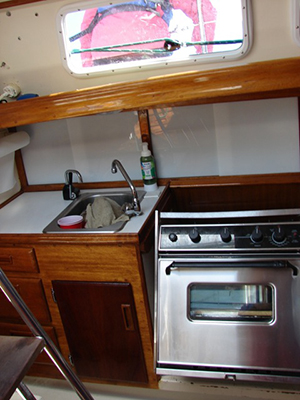 The stove is level because it is gimbaled. The sailboat is heeling.

Marine stoves use one of several combustible fuels or electricity to produce heat for cooking onboard. They are generally compact to fit in the confines of boat galleys and have special modifications for use underway.

Galley stoves are different from household ranges. They have to operate normally at angles up to 30° without cookware sliding off. Oven doors are latched securely so they can't be forced open by the weight of baking containers inside if the boat heels. The controls are located on the front or along the side, so the cook does not have to reach over hot cookware on a moving boat. There are no continuous pilot lights that could cause a fuel explosion.

Stoves on boats use a variety of fuels. Most rely on combustible fuels: either alcohol, kerosene, LPG (liquefied petroleum gas/propane) or CNG (compressed natural gas). Some powerboats and larger sailboats rely on electrical appliances in their galleys, which run off the engine's alternator and an inverter, shore power at the dock or a generator onboard that can produce 110V AC electricity.

Sailboat stoves are usually gimbaled, meaning the stove can swing back and forth on two pivot points so it tilts and remains level even when the boat is not. This helps keep pots and pans from sliding around while the boat is heeling or moving. Powerboat stoves are generally not gimbaled.

Stoves are made from non-corroding materials like stainless steel. Most will have two or more burners on the top to heat pots, and many have a burner in the oven for baking. Some have a broiler, with a flat burner on top of a broiler compartment so sandwiches, steaks and other foods can be broiled. Both power and sailboat stoves have potholders, which are bracket/clamps that encircle the base of the pot or pan to keep it from sliding.

Electric stoves are common on large boats that have plentiful 120V AC power from a generator or from shore power. Electric stoves are probably the safest stoves available, because they don’t introduce explosive gases into the cabin and they don’t have open flames or produce carbon monoxide. However, like any resistance heater, they require whopping amounts of electricity to operate. They are impractical on all boats except those with AC gensets.

Alcohol stoves have been common on production sailboats and powerboats for decades. Alcohol is a relatively safe fuel that, when liquid, does not explode. Its fires can be put out with water, but it has low heat content, burns with a sort of offensive odor and gives off a lot of water when it burns. Alcohol fuel is also expensive and feeble in its ability to heat large amounts of food. 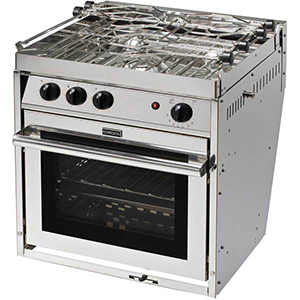 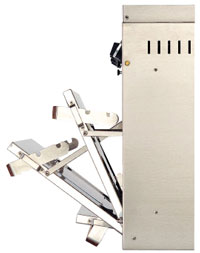 Old-style alcohol stoves, like those from Kenyon, Shipmate, Galley Maid and others, generally use pressurized tanks feeding burners that must be pre-heated with liquid alcohol to make them hot enough to vaporize the fuel so it can burn effectively. This process, although not difficult, must be done correctly or the stove will tend to flare up and send flames high above the surface of the stove.

This can also lead to an overflow of liquid fuel, which can leak around the stove causing a large, low-intensity fire when it ignites. Many boat fires are caused by alcohol stove flare-ups. For these reasons, the number of alcohol stoves using pressurized burners has declined dramatically.

Modern alcohol stoves (like those from Dometic Environmental) use non-pressurized burners, which store the liquid fuel in an absorbent material, rather than a pressurized tank. A special burner that looks like a small chimney creates a draft and intensifies the relatively gentle flame. There is no priming, no flare-ups and much less danger of fire on board. Although any fuel can be dangerous in an enclosed space, modern alcohol stoves that do not use fuel under pressure are much safer.

Kerosene and diesel stoves are less common, used mainly by northern-latitude cruisers and commercial boats. Kerosene and diesel burn extremely hot, are reasonably safe in liquid form and are compact to store since the fuel has a high heat content. If diesel is used, the ship’s fuel tank can be used to power the stove (and a cabin heater) as well as the engine. Kerosene and diesel are also cheaper (in terms of cost per hour of combustion) than alcohol.

The disadvantages are many, however. Both kerosene and diesel burn with a little soot, have to be pre-heated like alcohol and blacken the bottoms of pots. They also smell when burned, which makes some people violently ill. And they are just enough of a hassle to operate that you are much less likely to drop down below and put on a pot of water for tea or coffee.

CNG (Compressed Natural Gas) stoves are uncommon except in certain areas of the US, specifically Southern California. CNG is compressed methane gas, stored under very high pressure in gas form (2400psi at 100°F). Monitoring the amount of gas in the cylinder is easy, as the pressure declines steadily as the gas is consumed. CNG has a much lower heat content than other common fuels, so it is not tremendously efficient at cooking and heating.

CNG is lighter than air but it is still dangerous and potentially explosive, so CNG systems must be vapor-tight to the hull interior and well ventilated. In addition, the storage pressure for a CNG cylinder is very high (more than 10 times that of high-pressure propane), which creates additional safety concerns. Finally, CNG is unavailable outside of the U.S. and in some areas within the U.S. Cylinders can only be filled by a limited number of authorized fuel distributors.

LPG (Liquid Petroleum Gas, or propane) stoves have largely replaced alcohol and kerosene stoves on most new boats. LPG is compact since it is stored as a liquid and burned as a gas. LPG remains in liquid form when stored under pressure at room temperature (177psi at 100°F), and the pressure remains constant until the cylinder is almost empty. It has a high heat content, so there is lots of thermal energy in each pound. It lights instantly without pre-heating. And it burns with hardly a hint of odor, other than those rising from the tasty stuff one can cook.

Ah, but then there is safety…LPG is heavier than air and can settle as a gas in low areas of the hull. In sufficient concentrations, it can ignite and blow the deck off the boat. Since there is an explosion danger from propane in enclosed spaces like boat hulls, propane stoves must have safety devices to shut off the flow of propane if the burner is extinguished.

Here are some other safety precautions: The installation must be in accordance with ABYC guidelines. There are no shortcuts. Briefly, there must be a leak detector gauge, an isolated storage area, approved components, continuous supply hoses and an unobstructed venting system. Safety can be increased by using propane vapor monitors, solenoid valves and other optional but desirable devices.

Users must be trained to use the stoves (or heaters) correctly. This means shutting down the solenoid after every use and having the owner check for leaks on a regular basis. One good precaution, which can be taken every time the stove is used, is to keep the burners lit while shutting off the solenoid when finished using the stove. The burners should slowly go out, due to the lack of fuel. This checks the solenoid operation and drains the supply line of fuel. For more about propane safety, see the West Advisor, Safe Propane Installations. 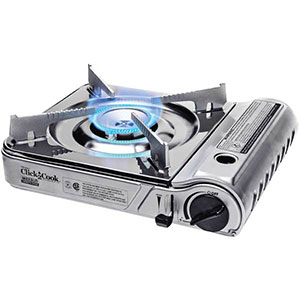 The Click 2 Cook stainless steel butane stove is portable and easy to set up when you need it.

Butane stoves are portable, economical alternatives to permanent stoves on boats where food is cooked onboard only occasionally. Butane is the fuel of choice for most disposable cigarette lighters and is available in small canisters (approx. 8oz.) to refill other small appliances, lighters, soldering irons, etc.

Butane, like propane, is a liquid at relatively low pressure (37psi at 100°F) so it stores compactly. Both fuels come from the same family of hydrocarbons, but the main difference between butane and propane is that butane liquefies at a higher relative temperature and lower relative pressure. Butane does not work well in extremely cold weather because the liquid butane fails to evaporate quickly enough, which causes appliances to work poorly.

The heat content of a particular fuel is a measurement of its heat output in thermal energy (Btu) per pound, gallon or cubic foot. Fuels with high heat content cook quickly and more efficiently, compared to low heat content fuels.

Here is a comparison of the heat content of several common stove fuels:

* An approximation, based upon a conversion from cu. ft. to gallons, because CNG is not stored in liquid form. 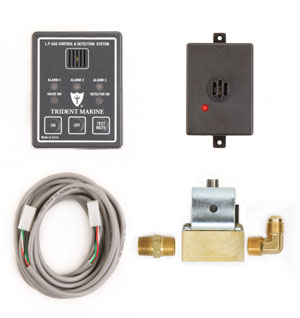 An LP Gas Detection and Control System enables you to turn gas on and off remotely, includes a “sniffer” to detect explosive propane vapors and an alarm to alert you when vapors reach 20 percent of the Lower Explosive Limit.

How many burners do you want?

You can get two, three or four burner ranges. Generally, two burner gas models have one 5,000 and one 8,000Btu burner, while three and four burner models add additional 5,000Btu burners. Electric stoves are rated in Watts, with 1100 to 1300W per burner.

Do you need a European size stove?

European boats use a metric-size stove that is slightly narrower than conventional American stoves. If you are replacing a stove on a Beneteau or Jeaneau, we can special order metric sizes.

Do your space constraints make an oven a tight fit?

You can get countertop cooktops, cooktops with broilers or a gas cooktop with an electric microwave oven. Many boats do not have the vertical room for an oven, but they can accommodate a broiler unit that is 10" shorter.

Do you need a gimbaled stove?

Sailors with stoves that pivot in the direction of heel will want a gimbaled stove, while powerboats and sailboats with cross-mounted stoves will not need them. A variation is the Drop-in Range, which sits flush in a countertop.