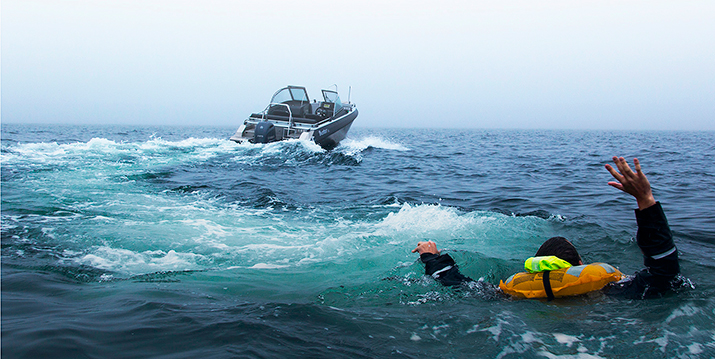 Get connected with a virtual kill switch, so you don't end up like this guy!

How many boaters who operate small, outboard-powered boats really use their kill switch, the lanyard that cuts your engine if a wave throws you overboard? We regularly hear of cases where unattended boats are found, out of gas, with nobody onboard. Folks have also been thrown out and then run down by their own boat. 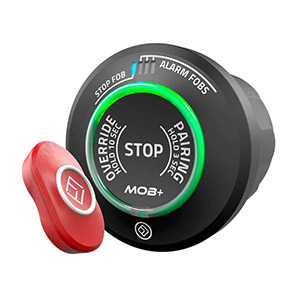 The MOB+ crew overboard alarm includes a gray xHUB and one red xFOB in the Basepack. You can connect as many as four xFOBs to each xHUB.

This Smart Boat product appeals to boaters who run smaller, outboard- or sterndrive-powered boats. It's an update to the common outboard motor kill switch, the MOB+ Wireless Man Overboard System from Fell Marine.

What good is a kill switch that you don't use?

Many operators of small, outboard-powered boats do not use their corded kill switch as it was designed, by clipping it to their clothing. Properly attached to you, the kill switch ties you down to a very limited space onboard. No wonder most folks don't "clip on," especially if you're trolling, setting or retrieving marks for a sailing race, dropping anchor or otherwise moving about in the cockpit.

If you happen to fall or get thrown out of your boat and you're not properly tethered to the outboard by your kill switch lanyard, the boat will either spin in circles or just keep motoring straight—two disastrous alternatives. You are either at risk of being run down by your own boat with the chance of a fatal prop strike, or you get to watch your boat go motoring away until it runs out of gas or hits something.

Other Articles on Smart Boat Technology

Fell Marine's MOB+ Basepack Wireless Engine Cutoff Switch solves this problem. It uses a dash-mounted xHUB that connects to small xFOB transponders, which can be worn on your wrist, in your pocket, around your neck or clipped to your life jacket. xFOBs weigh in at only 0.35 ounces and are only 1 3/4" long.

If you fall overboard, the xHUB cuts the engine, sounds an alarm and flashes red lights on your dash. The device includes an "Override Mode." In Override Mode, any passenger or crew onboard can restart the engine without the need to interact with the MOB+ system. This allows for a quick recovery of the missing person in the water and enhances safety.

There are more details about Fell Marine's excellent system, which you can see by clicking on the video below. The basepack which includes the xHUB and one xFOB is inexpensive when compared with the safety advantages and should be a must have for anyone who goes out alone in a small powerboat.