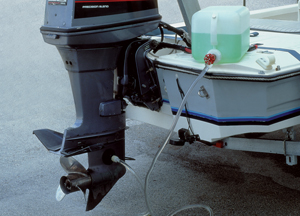 As the boating season draws to a close and Jack Frost begins his trek south, boaters turn to the task of laying up their boats for the winter. This article covers how to protect an outboard motor against corrosion and freeze-related damage during winter storage. The process, referred to as “winterization”, consists of some simple tasks that are easily performed by most owners of an outboard-powered boat. These tasks include: 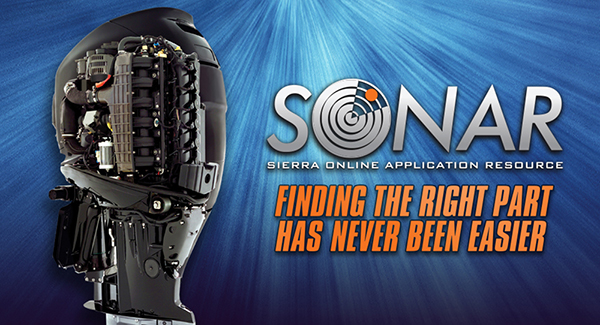 Try the interactive SONAR parts finder for the engine parts you need.

To accomplish these tasks, you will need the following items:

The reason you need to change the oil is because contaminants in “dirty” oil can corrode and shorten the life of engine parts during winter storage. Before beginning the oil change process, attach a set of flushing muffs to a garden hose and place them squarely over both sides of the water intake for your motor. Then turn on the water, start the motor and allow it to run a few minutes to warm up the oil. Then, turn off the motor and remove the flushing muffs.

Most four-stroke outboards have an oil sump drain plug located below the crankcase at the back or side of the motor’s leg. Unfortunately, changing outboard oil can be a bit messy. While some mechanics opt to remove the oil by sucking it out via the dipstick tube, this process does not get all the oil out. So we suggest you follow the manufacturer’s instructions for how to drain the oil and change the oil filter. (Note: Before removing the oil drain plug, be sure to position a catch pan under the motor to catch the oil as it drains out!) 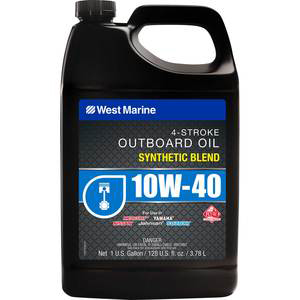 When shopping for outboard motor oil, make sure that the oil you select meets or exceeds the manufacturer's specifications in your owner's manual.

In some cases, the oil drain plug gasket may need to be replaced. Follow the manufacturer’s recommendations in this regard. When finished, some cleanup will be necessary—so make sure you have some rags on hand.

After draining the oil, remove the oil filter. Most of these are of the spin-on type, similar to those on automobile engines. Sometimes, filters that have “taken a set” might require an oil filter wrench for removal. The new filter should be an OEM or equivalent model. Before installing the new filter, lightly coat the O-ring on the filter with motor oil and then screw it on until it is hand tight.

After installing the new oil filter, fill the crankcase with new oil. Check your owner’s manual for the viscosity and quantity you need. Make sure the API service level meets or exceeds what the manual specifies as well.

Now is a good time to change the OEM fuel filter located on the motor. Follow your owner’s manual in this regard. 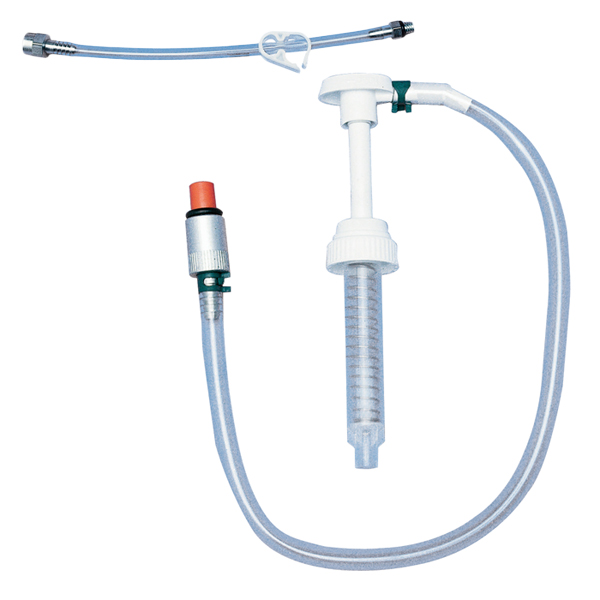 Example of a gear lube pump.

Before beginning, check your owner’s manual for the viscosity and quantity of gear oil that your outboard requires. The gear box (located directly forward of the prop) will have a stainless steel, screw-type drain plug at the bottom and a stainless steel screw-type vent plug somewhere above it. To start the process, place your catch pan under the gear box and then remove the bottom plug. Be careful to remove the gasket along with the plug. (Note: Many drain plugs include a magnetic prong to which some metal particles may be attached. Fine particles indicate normal gear wear, but coarse metal chips indicate excessive wear. If in doubt, consult with a service professional.) Once the bottom plug is removed, a small amount of gear oil will begin to drip out. Next, remove the vent plug at the top. Once the top plug is removed, the gear oil should freely flow out the bottom drain hole. As the oil drains out, observe its color and clarity. Gear oil in good condition should be translucent with a greenish cast, whereas a milky appearance indicates that water has made its way into gear box. If this is the case, seek the advice of a service professional.

New gear oil is always pumped upward from the bottom hole until it overflows at the top. The reason it is filled from the bottom up is to eliminate the possibility of trapped air and ensure that the entire gear box casing fills with oil. There are two ways to pump in the oil. For very small outboards, one way is to press the nozzle of a tube of gear oil into the bottom hole and to slowly squeeze the gear oil into the casing until it overflows out the top hole. For larger outboards, the other way is to use a gear oil pump. In either case, when the oil overflows out the top hole, replace the top plug, then remove the pump nozzle from the drain hole and quickly replace the plug. Make sure you don’t forget the gaskets! 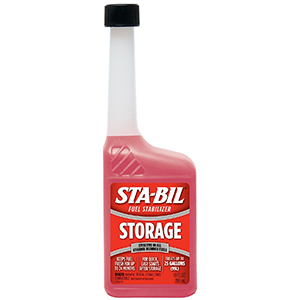 Gasoline fuel stabilizers help to prevent the formation of gum and varnish buildup and protect metal surfaces from corrosion during winter layup.

Stabilizing the fuel with products such as STA-BIL's Storage Fuel Stabilizer or Biobor’s EB Ethanol Treatment for Gasoline will help to prevent the formation of gum and varnish that can form during winter storage. Follow the manufacturer’s instructions for mixing one of these products at the correct ratio into your outboard motor’s fuel tank. Next, you need to circulate the stabilized fuel through the entire fuel system. To do this, reattach the flushing muffs, turn on the water, restart the motor and allow it to run for five to ten minutes and then shut it off.

Fog the cylinders while flushing the motor with antifreeze.

To prevent freeze damage, prior to winter storage, many owners simply drain the cooling water out of their outboards. However, while it might seem like “overkill”, we recommend flushing your motor with antifreeze. This will prevent residual water from turning into ice and causing damage during a hard freeze. Dosing your motors cylinders with fogging oil prior to winter storage will prevent the formation of rust within the cylinders—which obviously is a good thing! 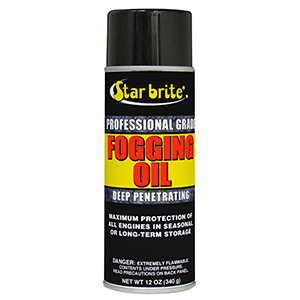 Engine fogging oils are typically offered as an easy-to-use spray.

Fogging the cylinders and flushing your outboard with antifreeze can be combined into a single procedure. For two- and four-stroke carbureted motors, after running the motor for five to ten minutes (per the instruction above), shut off the motor, disconnect the garden hose and hook up the winterizing kit to the flushing muffs. Then fill the winterizing kit’s tank with antifreeze, which should be of the non-toxic propylene glycol variety. (For more about antifreeze, see Antifreeze 101). Next, remove the cowling to gain access to the air intakes on the front of the engine. (Note: Certain late model outboards have a maintenance valve to which products such as CRC’s Engine Stor® Fogging Oil fit via an adapter. Check your owner’s manual in this regard.) Next, after opening the valve to the winterizing kit, restart the motor and watch the antifreeze level drop in the tank. You should begin to see antifreeze discharging via the “telltale” of water that exits the motor.

While the engine is running, begin to spray fogging oil into the carburetor(s). This will usually cause lower-horsepower engines to stall, while higher horsepower engines may cough and sputter, but continue running while emitting white smoke. Spray a good amount of fogging oil through the intake and then disconnect the fuel line from the engine, and continue spraying fogging oil into the engine until the engine dies. Usually the motor will run rough and emit white smoke just before it dies. Running the motor until it burns up all of the fuel from the carburetors prevents the formation of varnish deposits from gasoline that would otherwise remain in the carburetor bowl during winter storage.

Just like with the procedure described above, you can fog your EFI motor and at the same time winterize its cooling system with antifreeze. However, the procedure for fogging an EFI-type motor is different—and also little easier compared to carbureted motors. Instead of spraying fogging oil into the cylinders through the carburetor(s) you will need to run the fogging oil directly through the fuel system. This is commonly done by running a fuel line from the motor to a small container of stabilized gasoline into which fogging oil formulated for EFI motors has been mixed. Consult your owner’s manual for the correct fogging oil to use. (Important: Do not use fogging oil formulated for carbureted motors, as it contains a wax-like substance that can clog the fuel injectors of an EFI motor!) Unlike the procedure for carbureted motors, you should not cut off the fuel supply to the motor and then wait for it to stop. Instead, run the motor until you see white smoke exiting from the exhaust and then, before the winterizing kit runs dry, shut the motor off. (Note: Running an EFI motor until it quits due to a lack of fuel can damage the fuel system.) 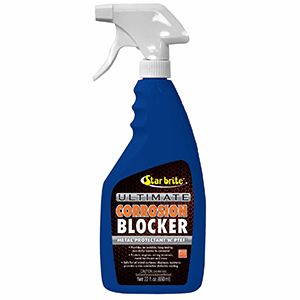 Applying a corrosion inhibitor will help prevent the formation of rust during winter layup.

For oil-injected two-stroke motors, completely fill the two-stroke oil tank so that water won’t condense inside the tank and contaminate the oil supply. Locate the zerk fittings for the pivot tube and the tilt tube and with a grease gun squeeze in some fresh grease. Next, spray a corrosion inhibitor on to the power head and replace the cowl.

Finally, remove the propeller, inspect it for damage, and have it repaired or replaced as needed. Check the shaft for monofilament fishing line wrapped around it, which could damage the seal. Lubricate the shaft with grease and reinstall the prop, or leave it off to discourage theft. Finally, store the engine in an upright position, so any water will drain out. Now you’re done—and your outboard is ready for hibernation