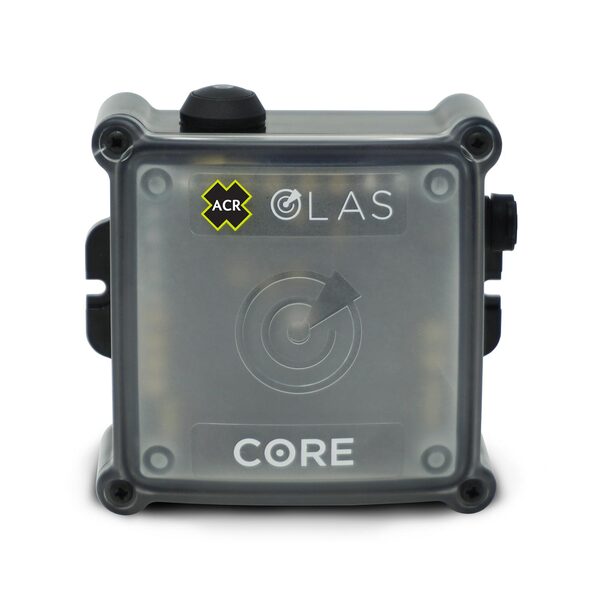 The ACR OLAS CORE is a small, portable, wireless Man Overboard (MOB) Alarm system that triggers an instant emergency alert, within 4 seconds of a MOB incident.

The CORE provides coverage for vessels up to 50 ft and the OLAS EXTENDER is an available option to expand coverage for vessels up to 80 ft.  With the ability to connect to a total of 15 wearable OLAS Tag and/or OLAS Float-On transmitters, the CORE creates a virtual lifeline to your crew members and acts as your boat’s base station to monitor and alert the crew should one of the transmitters go missing.  The CORE can also connect with the ACR OLAS mobile app which, in the case of a MOB incident, provides easy to read directional screens with a bearing and track back to the point where the alarm was triggered. The app also provides essential MOB position and procedure prompt screens, supporting the crew during the stress of a recovery operation.

Losing a crew member overboard is every boater’s worst nightmare. The ACR OLAS CORE gives boaters complete confidence that in the event of a MOB incident, the entire crew is alerted instantly and can take immediate recovery actions. Consisting of an easy to install base station that can be permanently mounted or used as a portable solution, the CORE communicates wirelessly with all connected OLAS transmitters at the same time.  Syncing transmitters is automatic on system startup, simply by holding the transmitter with 2 meters when the CORE is switched on. The CORE then passes all transmitter data onto the OLAS mobile app.

The CORE is your back-up for your back-up. Let’s face it, we all overuse our smart phones, and out on the water, they can overheat, run out of battery, and simply break. The CORE ensures your MOB situation is not solely reliant on your mobile device and thereby provides an additional level of security when paired with your ACR OLAS MOB system. The CORE works using the latest wireless Bluetooth technology and in the event of a MOB incident, it triggers a loud built-in alarm and emergency light.