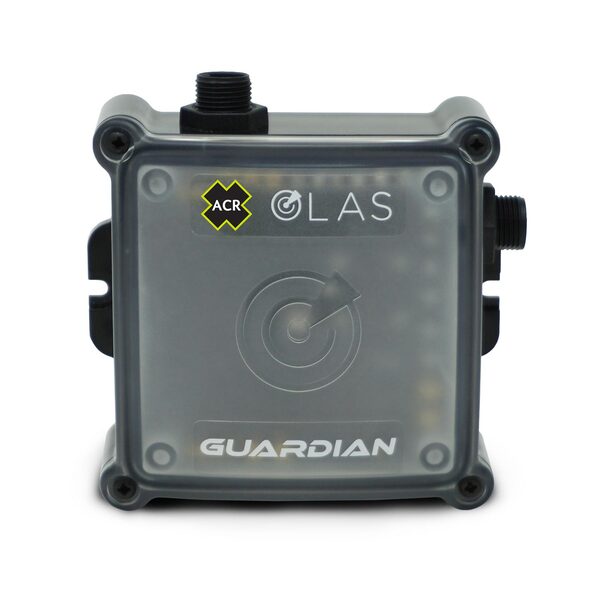 The ACR OLAS Guardian is a small wireless engine kill switch that acts within two seconds of a person going overboard. It has the dual function of also acting as an instant Man Overboard (MOB) Alarm system.

OLAS GUARDIAN offers powerboat, motorboat, and RIB drivers the security of knowing that their boat will stop in an instant, should the skipper or crew get separated from the boat, reducing the chances of a serious accident from a loose, unmanned, uncontrolled vessel. They are free to move around their boat without constantly having to remember to attach, detach and re-attach a physical wired kill cord. The GUARDIAN provides coverage for vessels up to 50 feet and is scalable via use of the OLAS EXTENDER as an available option to expand coverage of the system for vessels up to 80 feet.

The GUARDIAN functions as a wireless kill cord, which when connected to your engine's kill switch will stop the engine within two seconds of becoming disconnected. Given that the OLAS GUARDIAN also wirelessly connects up to 15 crew members via wearable OLAS transmitters (OLAS Tags or OLAS Float-On Lights), it essentially creates a virtual kill cord attached to each transmitter. Within two seconds of an OLAS transmitter losing connection, either by going overboard or via separation by distance, the engine will cut out, and a loud alarm is triggered. The engine can be restarted after five seconds, and a rescue can be performed. The rescue process is then simplified by the GUARDIAN’s ability to connect with the ACR OLAS mobile app which, in the case of a MOB incident, provides an easy to read directional screen showing the direction where the alarm was triggered and advises on the correct mayday call.