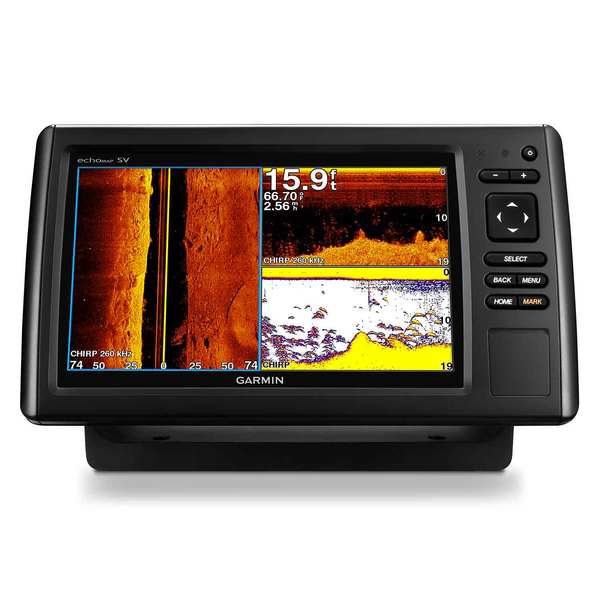 It's time you started fishing with the power of CHIRP sonar.

Includes CHIRP sonar: The built-in sonar capabilities of echoMAP 94sv include CHIRP sonar, the most sophisticated sonar technology available for the fishing and boating public. CHIRP sonar provides amazingly clear target separation and definition because it puts even more energy onto the target than traditional sonar. It also includes sonar-recording capability that coordinates the timing of the sonar return with your boat's position and saves digital information for playback on a computer using HomePort™ planning software. Use the user data sharing cable to share waypoints and routes between multiple devices.

Customize your screens with Shallow Water Shading, which allows you to contour shade for all depth contours shallower than what you determine is your safe depth. Fishing charts emphasize bathymetric contours with less visual clutter on the display. And there’s also a choice of standard 2-D direct overhead or 3-D "over-the-bow" map views for easier chart reading and orientation. Garmin New Chart Guarantee

Quickdraw Contours to create your own HD maps: Instantly create personalized HD fishing maps onscreen with 1-foot contours. Tailor them to fit your needs. These are your maps—you own them. Keep the data to yourself, or share it with the Quickdraw Community on Garmin Connect™.

Heading and position refreshed five times per second: Fast, responsive 5 Hz GPS and GLONASS refreshes your position and heading 5 times each second to make your movement on the screen more fluid. Now it’s quick and easy to drop up to 5,000 accurate waypoints and find your way back to your secret fishing hot spots.

Add Panoptix LiveVü Forward Sonar: With LiveVü Forward your boat can be moving or stationary. Wherever your trolling motor is pointed, you will see live images of what is happening under the water. Watch your lure as it sinks, and see its depth and movement as you retrieve it. See it move in relationship to structures in the water. See fish swimming, reacting to your bait; if they attack, you’ll see and feel the hit. Once on the hook, watch the fight on your screen as it happens. With Panoptix LiveVü Forward, you can see it all come to life up to 100 feet away.

GPX Waypoints Transfer: If you have waypoints, tracks or frequently used routes stored on another manufacturer’s GPS product—or on a Garmin handheld device—now it’s easier than ever to transfer those items to your new Garmin chartplotter, via industry-standard GPX software formatting.

SailAssist features: Supported SailAssist features include laylines, enhanced wind rose, heading and course-over-ground lines and true wind data fields. Gauge displays are designed to provide important, need-to-know information at a glance, including true and apparent wind angle, set and drift, true or apparent wind speed, horizontal graphs and a data bar with customizable data fields. To help you gain a wind-maximizing competitive edge, your chartplotter features a pre-race guidance page that shows your virtual starting line along with data fields showing laylines, time to burn before the start and a race timer.