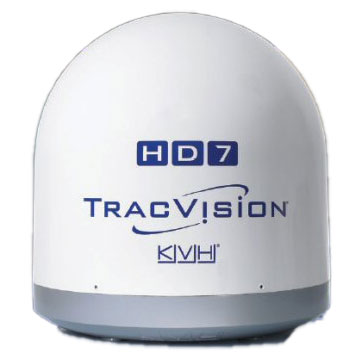 One compact 24" dome, three satellites at once, 130-plus HD channels from DIRECTV®-exactly like you enjoy at home.

This is satellite TV at sea like you’ve never seen before! The TracVision HD7 uses KVH’s revolutionary TriAD™ technology to receive uninterrupted broadcasts from three separate Ka- and Ku-band DIRECTV satellites simultaneously, allowing any TV or DVR onboard to receive any channel at any time, just like at home.

Installation is simple with a Single-Wire Multiswitch that supports up to eight DIRECTV HD receivers or four HD DVRs using a single RF cable. Identical mounting design with TracVision 6/G6 and M7, so upgrades are a breeze. Enhanced tracking algorithms and stainless steel bearings allow the antenna to track more smoothly than earlier designs.

Why do you need three satellites? Until recently, all of DIRECTV’s standard and high-definition TV programming was broadcast via satellites operating in the Ku-band (11.7-12.7 GHz). However, in a move designed to support an increased number of channels and high-capacity data broadcasts, DIRECTV moved all of its HD channels to new Ka-band satellites, which broadcast in the 18.3-18.8 GHz range. Now, DIRECTV broadcasts the majority of its HDTV channels from satellites at 99°W and 103°W while the original Ku-band satellite at 101°W provides all of the standard definition programming PLUS the program guide for all three satellites. By tracking and receiving signals from all three satellites at once, the TracVision HD7 offers the same experience a DIRECTV customer enjoys at home.

Service in Canada and the Caribbean: The primary use for the TracVision HD7 is to enjoy DIRECTV HDTV programming via the 99°W, 101°W, and 103°W satellites. However, boaters who wish to watch programming from other DIRECTV satellites, such as the 61.5°W, can use the IP ACU or iPhone App to make that switch. Likewise, it is also compatible with Bell TV (formerly ExpressVu) in Canada, allowing boaters who head north in the summer to watch Canadian programming. For boaters heading south, the TracVision HD7 is available with KVH’s exclusive Tri-Americas™ LNB, which supports DIRECTV service in the continental United States as well as DIRECTV Latin America service in the Caribbean, Mexico, and Central and South America. This option enables boaters to switch among these different services without requiring any hardware changes.

Satellite TV for everyone onboard: KVH’s exclusive TriAD™ technology, enables the TracVision HD7 antenna to receive broadcasts from all three DIRECTV satellites at once so that everyone onboard can watch the channel they want, on whatever TV they want, whenever they want! Never again wait through lengthy satellite searches or be limited to the content from just one satellite at a time.