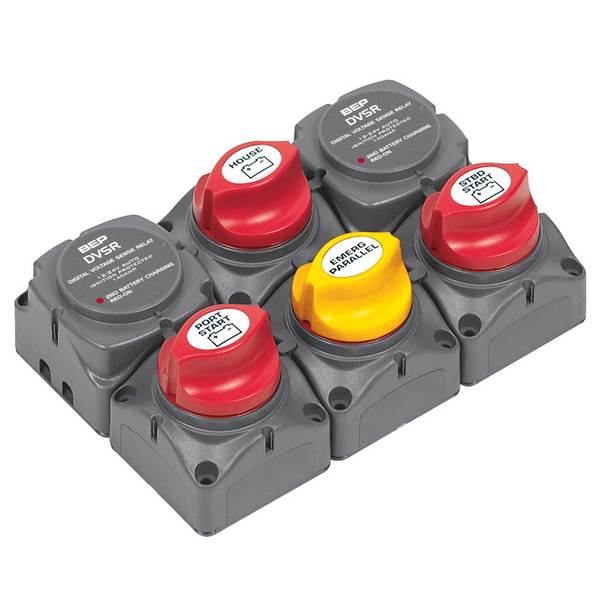 The 701 Battery Master Switch offers a number of unique features. The highlights being the contour lock system, allowing it to be locked together with other switches. The 701 also features a control knob which cannot be removed while in the On or Off position, however can be removed by switching to counter-clockwise 45º position. The 701 also features a removable rear cover, insulating the rear terminals against any short circuits and ensuring the switch meets ABYC requirements.

The 717 System includes dedicated battery switches for both the port and starboard start banks, the house bank and emergency parallel, and a 710-125A voltage sensitive relay (VSR) for each start bank. The port VSR allows the port and house batteries to be charged at the same time.

When the port engine is started, and the port start battery reaches 13.7 Volts, the relay closes, combining the battery banks (port start and house) and allowing them to be charged simultaneously.

When both engines are running and both start batteries have reached 13.7 Volts the house battery is charged with the combined charge of both alternators.

When an engine is stopped and the start batteries voltage drops to 12.8 Volts, the connected relay will open separating the batteries.

This system eliminates the possibility of draining the wrong battery and protects sensitive electrical equipment powered from the house battery from harmful engine start up spikes.

The 717 cluster is designed for twin outboard’s without auxiliary outputs with an alternator size up to 100A.