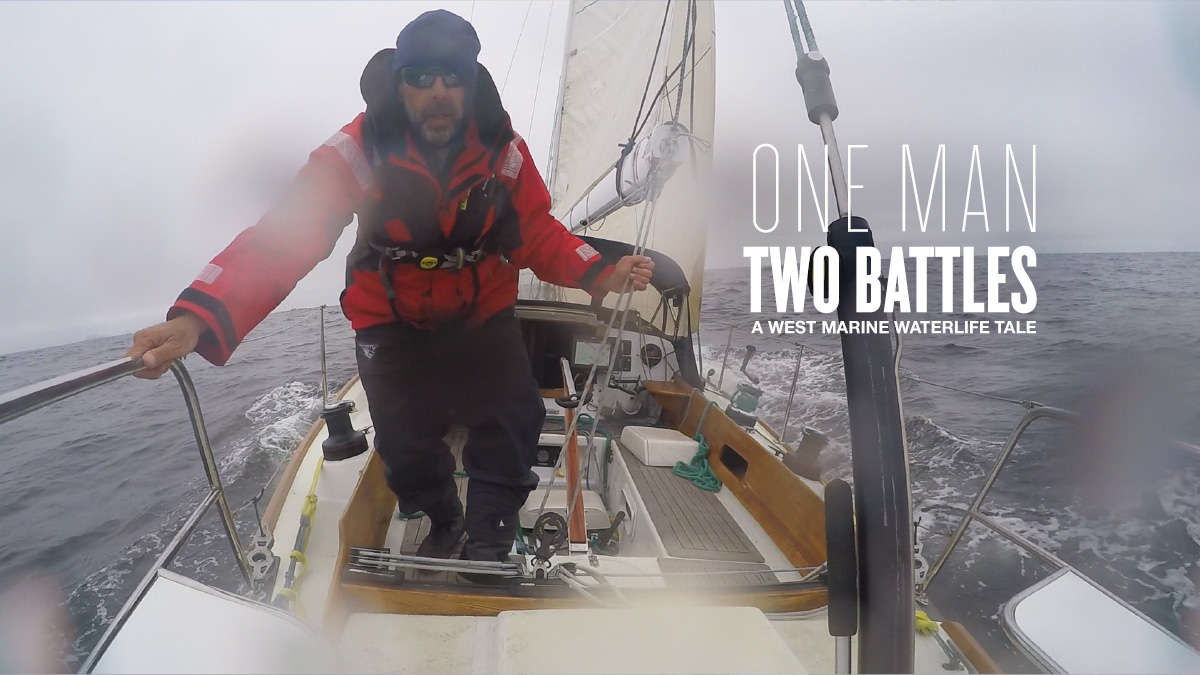 My competitors in the fleet are displayed as triangles on the chartplotter screen, with AIS data overlaid from the networked NAIS400 transceiver. This first night the key goal is to reach the “wind,” the open ocean breeze that blows 24 hours per day. Near shore, the wind shuts down for the night, parking a large group of boats by the Farallones until daybreak. Shaman is fortunate to find the ocean wind and escape, blasting along through the night with the leading boats in our fleet. 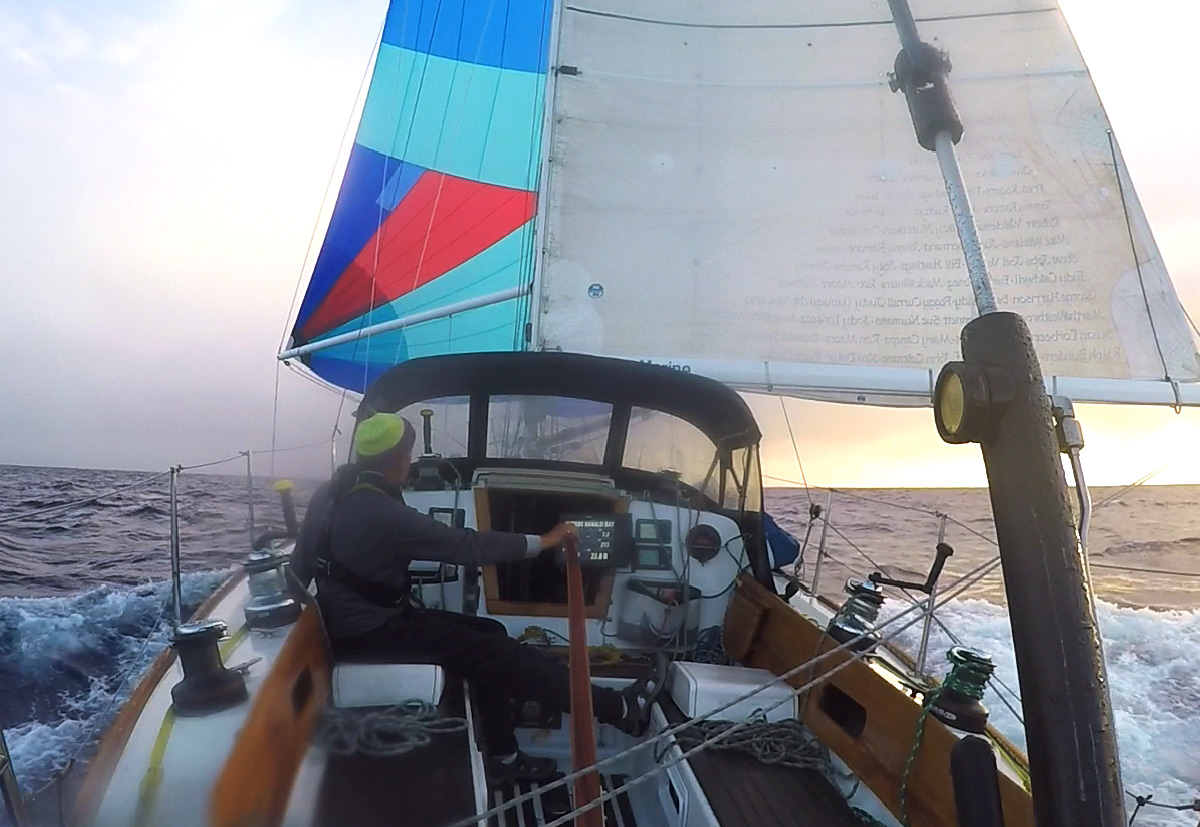 On day seven I finally find the trade winds. There has been a lot of rain, choking the wind off. Finally, the 3/4 ounce kite is flying and not collapsing on every wave. I am hopeful of catching Seazed Asset, the other Cal 40. He is about 20 miles ahead. I’m feeling confident. That night, however... 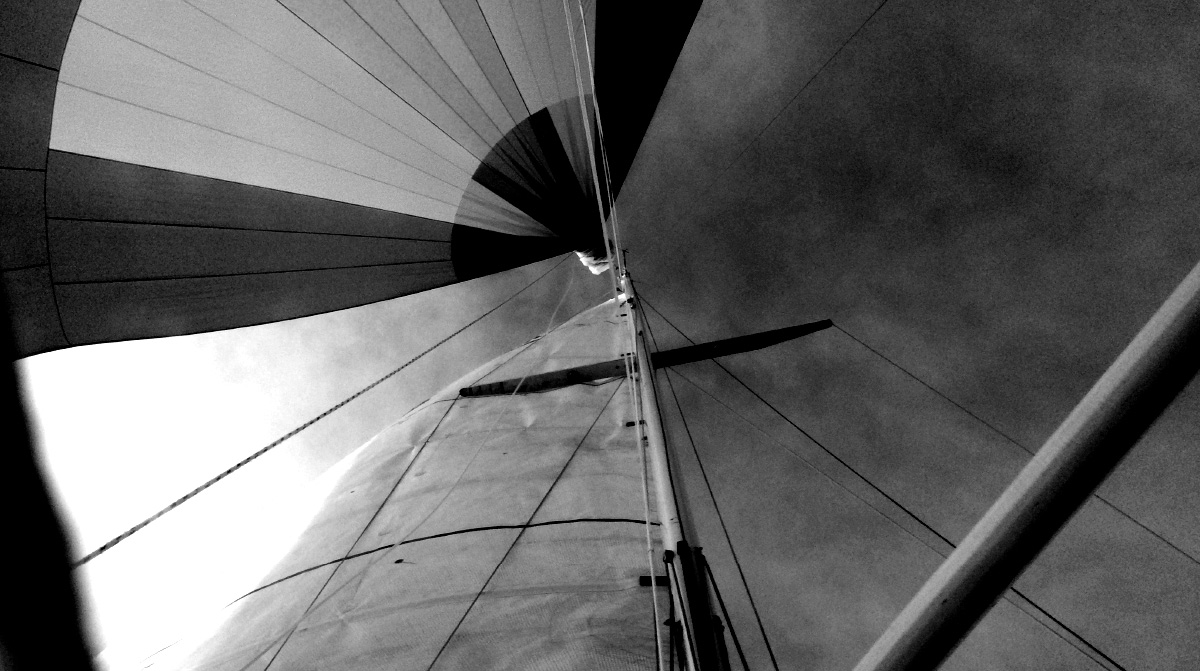 ... just as darkness falls, the breeze builds from 17 to 20 knots. I realize it’s time to douse the 3/4 ounce spinnaker. So with the wind building and the light rapidly failing, I move forward along the windward side to take down the colorful spinnaker sail.

With the autopilot steering the boat, I clip my tether to the jackline, a taut webbing safety line running along the deck, and move forward. Cal 40s roll a lot, with a 5,000-pound keel acting like a giant pendulum under your feet. Shaman is often surfing down waves at nine knots or faster, so getting thrown out of the boat would mean certain death.

By the time I get to the foredeck, the sail is crashing and banging behind the mainsail, making an incredible racket. Scooting down to the leeward rail, I untie the sock control lines. They barely budge. “What the heck?” I say out loud, “It’s jammed!”

Pointing my waterproof spotlight skyward, the swirling nylon of the sail moves aside for a few seconds, and I gaze open-mouthed in horror at what is revealed. The sock, also called a spinnaker sleeve, has found a way to tangle itself in the spinnaker net. Worse, the sock has only lowered about ten feet, so the whole sail is still unfurled.

I am now in a tug-of-war with a raging beast. I remind myself, “Don’t let it pull you out of the boat!” My hands burn as I grip the line. Seconds feel like minutes, but after a while I am able to tie the control lines to a pad eye on the deck in front of the mast. I then open the forward Lewmar hatch to stuff the sail below deck.

On the edge of panic, I ask myself, “What do I do now?” I experience seconds of hopeless confusion, before the solution dawns on me. “Okay, release the spinnaker halyard.” I crawl to the halyard winch behind the mast and take off a couple of wraps. (Halyards are lines that raise and lower sails.) I release the halyard a little and can now haul in a little of the sail.

The top of the sail drops about ten feet. Not enough! It’s still stuck around the spinnaker net!

The sail is two-thirds down the hatch now, but I notice that the spinnaker net has wrapped itself around the headstay, the spinnaker pole and the sail. There’s still enough sail in the air, twisting, crashing and jumping about with a thunderous roar, that it will soon rapidly shake itself to pieces. I curse under my breath, “Crap! Gotta get the rigging knife!” It’s only getting darker.

Leaving the mess as it continues its deafening midair thrashing, I clip the short tether to the jackline and crawl/scoot along the side deck to the cockpit. I grab the rigging knife from its holster by the companionway.

Now I’m back at the foredeck hatch. Here is the webbing of the net. Cut the $500 product. I think about how much money I am wasting, but now I can stuff more sail. Here’s another tangled piece of the webbing. Cut it! The serrated Myerchin knife slices through it like butter. I stuff the rest of the sail. I’m bathed in sweat, my heartbeat is about 180, and I’m breathing hard.

I close the hatch, with the afterguy and parts of the spinnaker net dangling out from under the lid. They’re hopelessly tangled around the spinnaker pole and the headstay. Too exhausted to care, I clip off the two halyards and crawl aft.

The boat sails on under the mainsail and I go below, close the companionway hatch slider, and fall into my berth.

My only thought is “What in the world am I doing here?” Eventually, I fall into a nightmare-wracked sleep.

The next morning I am greeted by a glorious sunrise. I take a few hours to untangle the mess from the night before. 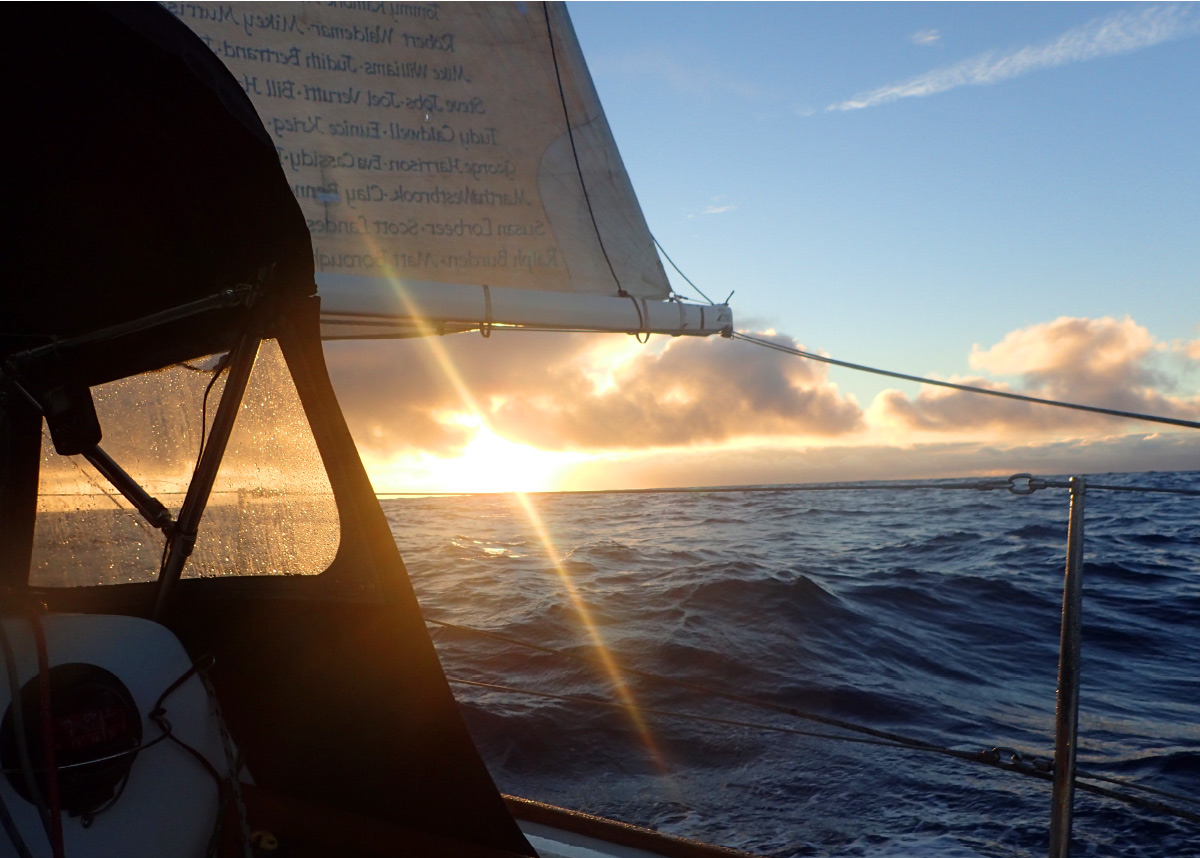 But no matter what goes wrong, there’s always another incredible sunset to watch. We surf waves, with the speedometer ratcheting from six knots to 10, 11, 12 knots, wave after wave, for a thousand more miles.

The sun crosses the sky from horizon to horizon. One day follows another, as I sail on wing-and-wing through the vast, lonely sea. Twenty-one flying fish and two squids come aboard Shaman. While I see lots of humpback whales by the Farallones, there are no mammals to be seen in the deep ocean. I see four ships, and, sadly, lots of plastic debris.

I read every word in every book and magazine on the boat. I communicate with my friends and shore team using my iPhone and an Iridium Go satellite phone. I eat the finest cuisine to be found for miles around.

One day, about 60 miles from the finish, I clean house, put up decorations and throw myself a party. I have 1,000 songs saved on my phone, and I crank up the tunes on my BoomBottle + Bluetooth Speakers. 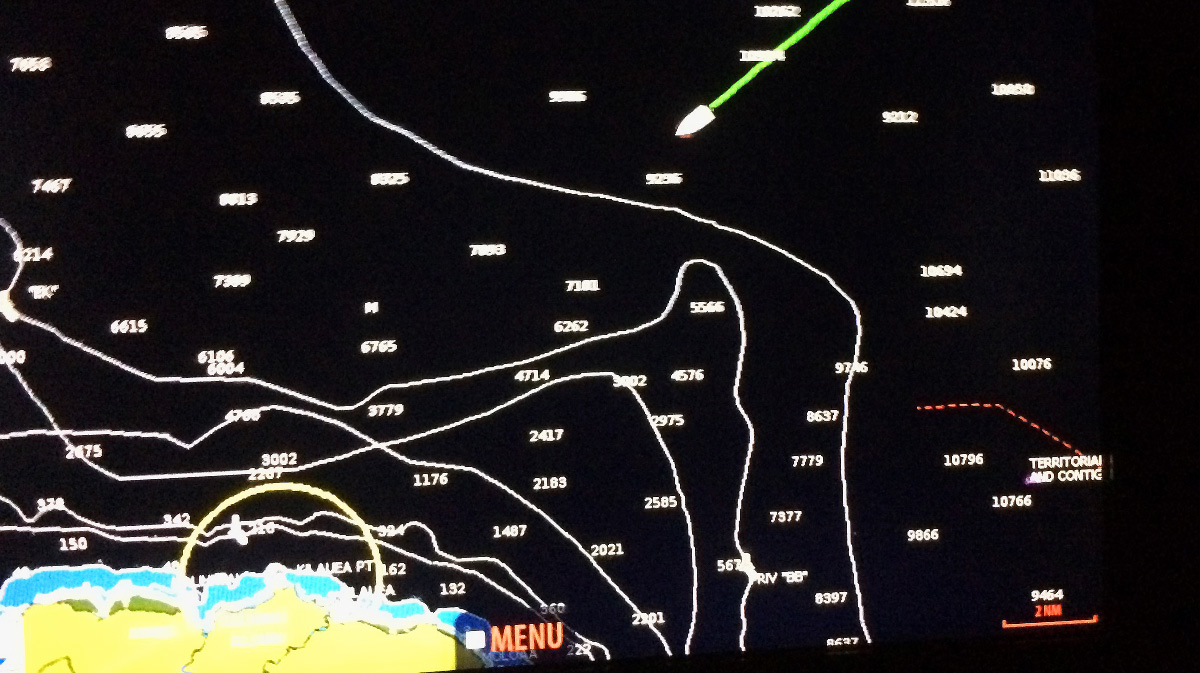 I spend a final, mostly sleepless night watching for shipping traffic. Then I see the flashing beam from the Kilauea Lighthouse, my first contact with the island of Kauai! The sky brightens to gray and a warm, soaking rain drenches my clothing as I cross the finish line at 5:48 a.m.

And after 14 days, 20 hours, 38 minutes and 2 seconds and 2,120 miles, Shaman drops her anchor in Hanalei Bay, on the island of Kauai, known as the Garden Island. 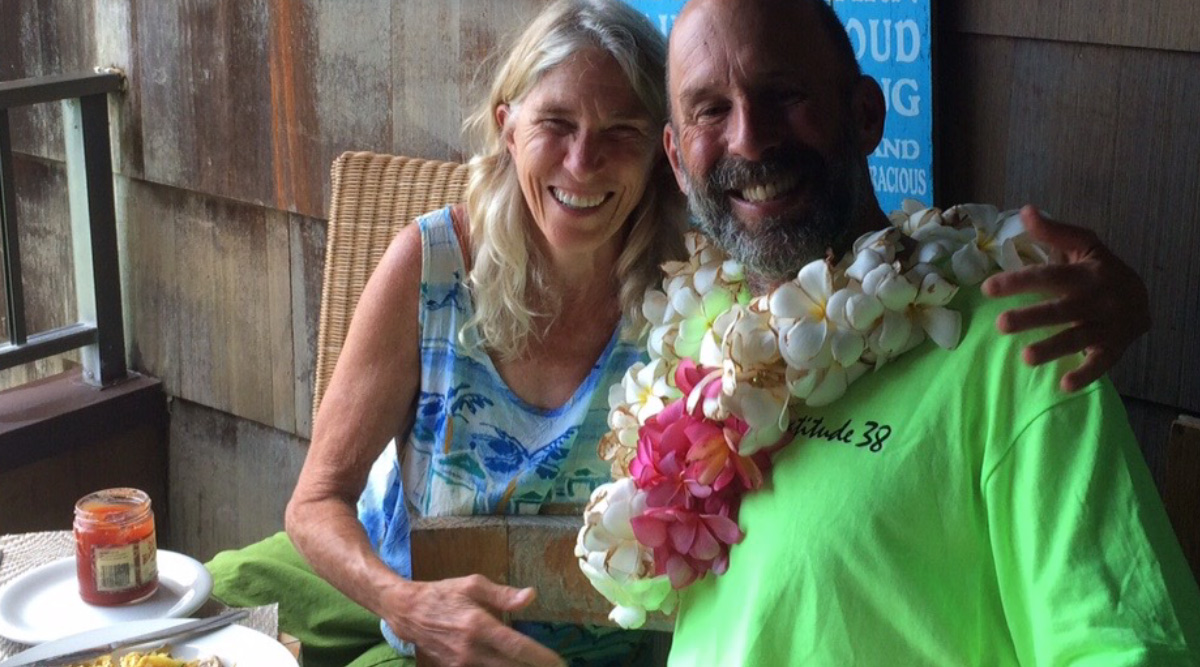 Jeff, Michele and my sweetheart Kitty serve me a delicious champagne brunch. Now that I am back on land, I experience riding in a car, taking a shower and sleeping in a stationary king-sized bed instead of the pilot berth on Shaman. 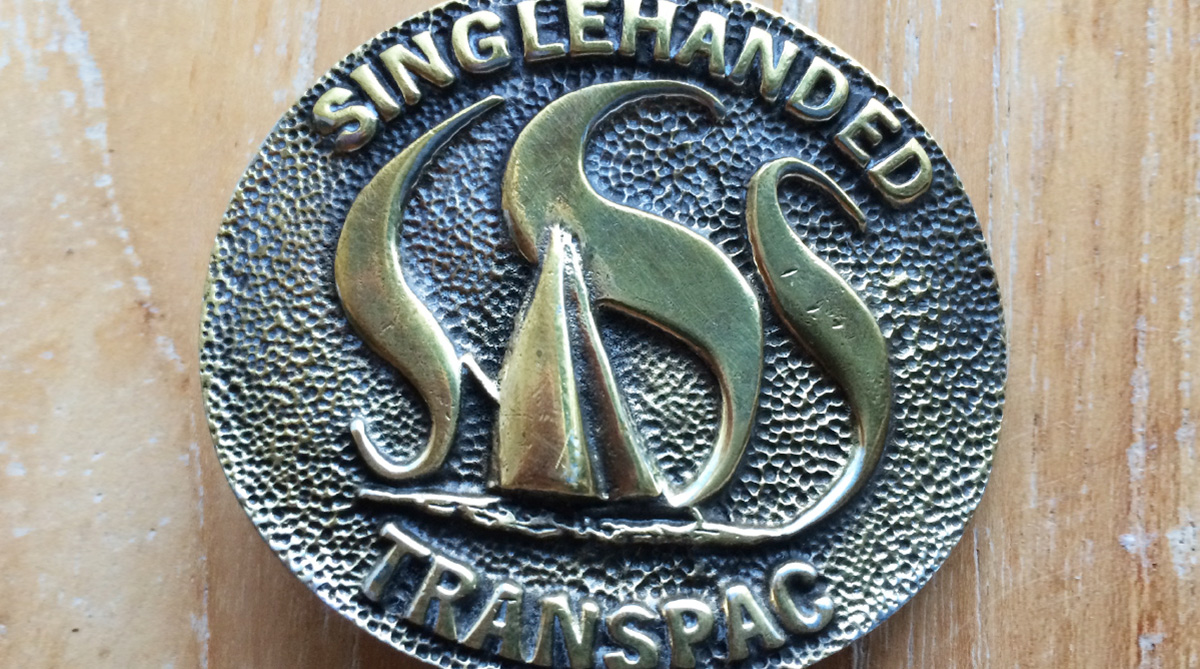 Then I collect this iconic belt buckle. In my first Singlehanded Transpac, I finish 7th overall out of 23 competitors and 2nd in my class.

Moreover, I have done it. I have earned my bronze buckle. I now stand on this side of cancer, knowing that more people have climbed Mount Everest than have finished the Singlehanded Transpac. And I now stand proudly among them. And I’m not done yet.

Featured in this Story

Plus a few of Tom's other Waterlife Essentials 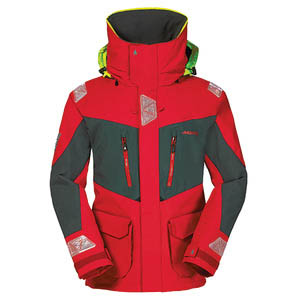 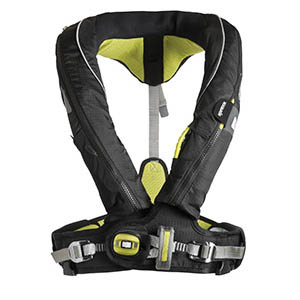 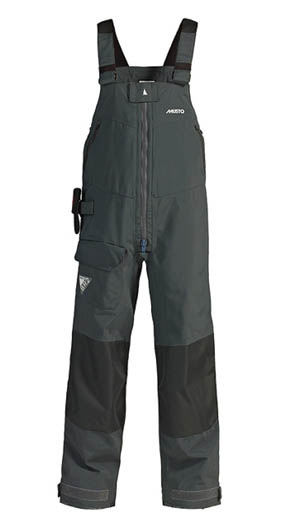 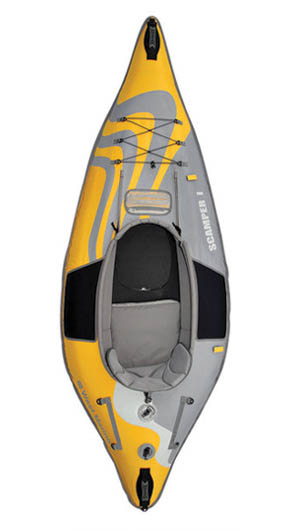 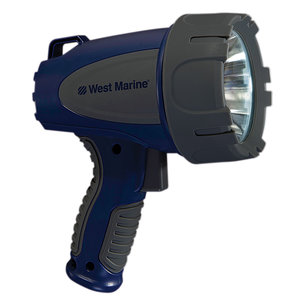 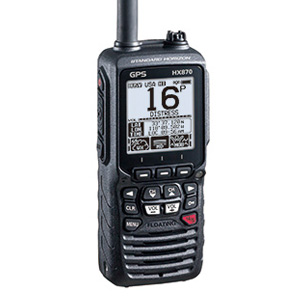 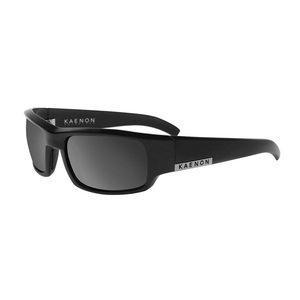 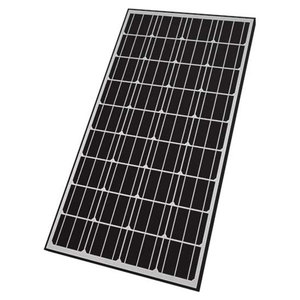 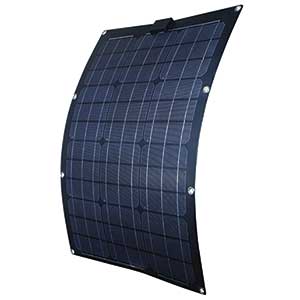 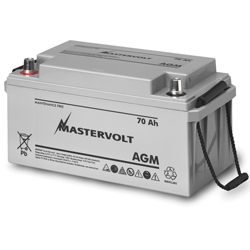 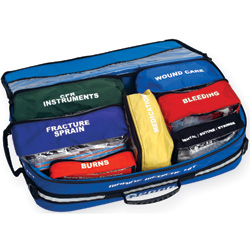 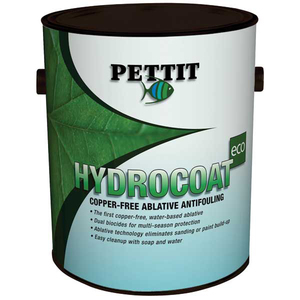 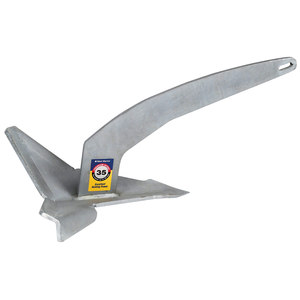