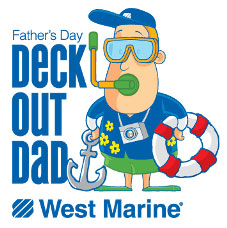 Watsonville, CA (April 15, 2015) – West Marine, one of the world’s largest waterlife retailers, today announced its 2015 “Deck Out Dad” promotion. This Father’s Day, West Marine is looking for the dad most in need of a waterlife makeover. By spreading the word on social media – Instagram, Facebook and Twitter – West Marine is encouraging folks to share photos of fathers who could benefit from a $500 West Marine gift card.

Maybe dad will upgrade his fishing gear to better enable him to catch dinner – or just update his casual attire so he doesn’t embarrass the family at a favorite seafood restaurant. He might need foul weather gear that doesn’t leak or a lifejacket that doesn’t look like it survived World War II. He might even want to spend it on supplies to finish up that boat project he started last season. Whether the dad in your life is incredibly makeover-worthy or just a little too frugal, we want to hear why he deserves to win new gear from West Marine.

“There are a lot of people who love being out on the water with their dads – even if their dad could use a makeover,” says Deb Radcliff, Senior Vice President of Marketing for West Marine. “The contest is a fun way to share photos of friends and families who enjoy spending time together on the water.”

Entry Process: Photos should be posted on Instagram, tagged to West Marine and include the hashtags #westmarine #deckoutdad. Captions should include info on why the dad is deserving and/or needing a makeover.

Judging Criteria: Photos can be funny or sentimental, and preference will be given to those taken on or near the water. They could be on a boat, walking along the beach or at a waterside restaurant. Or, even at West Marine!

Winner Notification: The winning entrant will be asked to visit a West Marine store to pick up their $500 gift card, and must agree to a brief photo shoot that shows them shopping. (What he buys is up to him.) He must also agree to use of the photos (before and after) for West Marine promotional purposes.

Founded in 1968 by a sailor, West Marine, Inc. is the largest omni-channel specialty retailer exclusively offering boating gear, apparel and footwear and other waterlife-related products to anyone who enjoys recreational time on or around the water. With over 270 stores located in 38 states, Puerto Rico and Canada and an eCommerce website reaching domestic and international customers, West Marine is the leading waterlife outfitter for cruisers, sailors, anglers, paddle sports enthusiasts and industry service providers. West Marine has everything you need for your life on the water. For more information on West Marine, Inc. its products and store locations, visit westmarine.com or call 1-800-BOATING (1-800-262-8464). West Marine’s stock is traded on NASDAQ under the symbol WMAR.