How to Select Sealants & Caulk

Butyl Caulking Tape is a popular alternative to liquid sealants.

Sealants form a watertight and airtight seal between two or more surfaces. Some sealants provide an adhesive bond (often supported by mechanical fasteners); others are used to isolate one surface from another against electrolysis, vibration or noise.

Unlike glues, which usually cure as a relatively brittle solid, sealants cure to a tough, flexible, rubbery consistency, adhering to surfaces to prevent water or air from penetrating. Because sealants are permanently flexible, they can withstand some movement of the surfaces to which they are bonded without losing adhesion. The bonding strength of sealants varies from moderate to extremely strong—which in the case of some sealants can be considered nearly permanent. Curing time can range from hours to a week or more. Some sealants cure most rapidly in the presence of moisture.

What Materials Are You Bonding/Sealing?

More than anything, the application and the kind of materials you plan to bond will influence what type of sealant you need. Determine the material of the surfaces you want to bond or seal and consult the compatibility chart (below). Make sure that if the surfaces are dissimilar materials, the sealant works with both of them.

How likely is it that the bond will need to be broken? 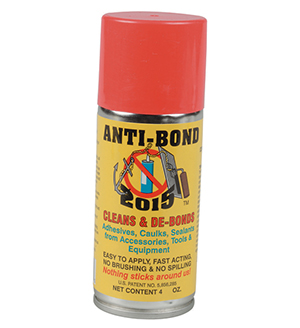 Marine adhesive removers like Anti Bond 2015 debond and aid in the removal of most polyurethane sealants.

Temporary or permanent bonding: Some products, like 3M 5200, have a reputation for secure bonding that should not be taken lightly. We’ve seen a 10,000 lb. keel which was put on with 5200 that held so strongly, it practically delaminated the hull during an attempted separation. Use compounds with less tenacious adhesive qualities if you know that you’ll have to remove the item at a future date, for example when bedding deck fittings. 3M’s Fast Cure 4200 has half the strength of 5200, which (with some effort) allows for disassembly of parts.

A bond created with 3M 5200 may last forever, so you are in a pickle if you later decide to separate the two surfaces. The solution is a marine adhesive remover like Anti-Bond 2015, which breaks the bond between the adhesive and the substrate, so deck hardware can be removed. Penetration can be encouraged by first scoring the edge of the bond with a blade, which might be required in the case of winches or other hardware that have been in place for years. Anti-Bond 2015 can be a real life saver in the case of hardware that is difficult to remove.

Is the use below the waterline?

Above or below the waterline: Sealants that use talc or similar water-absorbing materials can fail if immersed for long periods of time, therefore they are not suitable for underwater application. Silicone-based sealants used to fall into that category too, but many of them have been reformulated for underwater use.


3M 5200 Fast Cure, very messy to work with, very tenacious as an adhesive.

Polyurethane: Recommended for permanent bonding because of its enormous adhesive strength of about 700psi, polyurethane is more of an adhesive than a sealant. It is good for hull/deck joints and bonding thru-hull fittings but incompatible with ABS and Lexan, and does not adhere well to many other types of plastic. Polyurethanes have poor resistance to oil and the acids used in products such as teak cleaners. Do not use polyurethane-based sealants if the bonded items might have to be separated in the future.

Silicone: Versatile, quick and easy to use, elastic and highly resistant to chemicals, silicone is excellent for isolating dissimilar metals. It is not as strong in adhesive strength as polysulfide or polyurethane. Depending on compression from mechanical fasteners to maintain its grip, it’s more of a gasket material than a sealant, but is compatible with plastics. A big disadvantage is that silicone caulks leave a silicone-based residue behind that’s difficult to remove, to which nothing will adhere, including fresh silicone or paint (silicone is not paintable either, but polyurethane, polyether and polysulfide are).

Polysulfides: Perhaps the most versatile sealants available are synthetic rubber sealants called polysulfides. Two-part polysulfides, such as Life- Calk Deck Seam Sealant, have long been popular as caulking material for teak decks or for bedding wood parts like rubrails and cockpit coamings. One-part polysulfides, like Life-Calk, are easier to use, just as durable, but slower to cure. Both bond well to most surfaces but oily woods (such as teak) should be primed with Life-Calk Primer.

Polyether: One of the most exposure resistant sealants, unaffected by teak oils or cleaners, permanently flexible, and sandable. West Marine Multi-Caulk is an excellent choice for wood, metal, or fiberglass but will attack some plastics. However, 3M 4000UV is rated as being safe for all plastics.

Flexible epoxy formulations: New epoxy variations, like Pettit FlexPoxy and WEST System G-Flex, are more flexible and less brittle than traditional epoxies. They cure faster than some polyurethanes, adhere well to many materials and may be another alternative to consider when you want a permanent and somewhat flexible bond.

How quickly do you want it to cure?

Curing time: Despite many advances in the development of marine sealants one thing has not changed: They all require various periods of time to cure properly. Frequently, the most tenacious and best-performing products take the longest time to cure. Here are a couple of examples: Life-Calk, preferred for deck seams, takes 10-20 days for a complete cure. 5200, the strongest slow-cure version, takes 5-7 days.

These slow-cure products provide lots of working time, but also can potentially prolong a haulout or confine you to the dock over the weekend. Make sure you plan ahead. Even if you are able to use the boat, you could easily damage the bond depending what part of the boat is affected. On the other hand, moisture in the air or dew on the decks may accelerate the cure of products like polysulfides or polyurethanes. The cure can also be speeded up by misting water onto the exposed glue line.

None of these sealants do a good job unless you follow the right application plan. Here are some basic rules that will make your “goo” work for you:

Prep work: Make sure that both of the surfaces are clean and dry. Peel or scrape away every bit of the old sealant and wipe down the mating surfaces with acetone.

Read the label: The time it takes for a sealant to "skin over" and begin to cure varies. So in order to ensure that you have enough working time, know the properties of the sealant before you begin. Excess sealant can be cleaned up with the appropriate solvent. The best solvent to use for cleanup should be stated on the label.

Mask off the edges for a neat appearance: To give hardware and other items a neat appearance when bedded with polyurethane or other sealant, apply masking tape to the edge of the hardware and to the substrate, allowing about 1/8" between the two masked edges. After masking the edges, you can remove the excess sealant with a caulking tool (which works better than your finger) before pulling away the tape. Masking takes time, but will help you to create a professional looking bead of caulk along hardware edges. If you do not plan to mask, an alternate method is to remove the excess sealant by slicing it off with a utility knife after the sealant has cured.

Use enough: Apply a liberal coating of the caulk so that it will squeeze out around the entire perimeter of the joint. If you don’t see that “good squeeze-out” the joint will likely leak. A thick enough glue line is the key. This is not the place to economize.

Snug the fasteners and don’t over-tighten them: Pull the two mating surfaces together so they’re both bedded in the sealant, and the caulk squeezes out evenly. Then leave the components alone until the sealant cures. Tightening hardware fasteners to the point where most of the sealant ends up on your cleanup rag may result in a leak.

Compress the seal: Once the sealant is fully cured, you can finish tightening the fasteners, ideally by tightening the nuts, not the bolts in your thru-bolt assembly (turning the bolts will break the seal around each one and allow water to penetrate). Compressing the sealant ensures a watertight bond, even if the sealant does lose its hold.