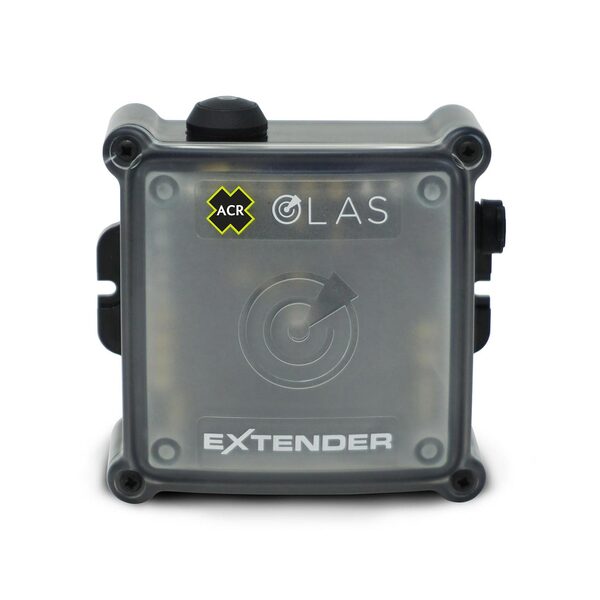 The ACR OLAS EXTENDER is a small, portable, wireless range extender that provides the flexibility of scaling your OLAS GUARDIAN Engine Kill Switch and OLAS CORE MOB Alarm Systems for use on larger vessels.

The OLAS EXTENDER effectively increases the length of the ‘virtual tether’ which exists between the OLAS transmitters (OLAS Tag and OLAS Float-On) and the OLAS Receiver (OLAS CORE, OLAS GUARDIAN,). Users on vessels up to 80 ft. in length can therefore now enjoy the comfort in knowing that within 2 to 4  seconds (depending on which OLAS receiver is in use) of a transmitter going missing, all synced receivers (excluding the EXTENDER which is solely used for extending the range of coverage of your OLAS system) will sound a loud audible alarm to alert crew of an MOB incident. In conjunction with the audible alarm(s), the ACR OLAS Mobile App records the latitude and longitude of the incident using the phone or tablets GPS, then aids the crew with the MOB recovery, clearly directing them to the GPS location where the MOB occurred with clear visual signals and bearing data.

The EXTENDER can also be used with OLAS receivers and transmitters to cover areas where transmitter signals may be blocked, thereby providing a greater number of applications of the OLAS MOB System. With the increased range of coverage on larger vessels, the EXTENDER significantly expands the number of potential usage scenarios for the ACR OLAS MOB System, making it applicable to an even greater segment of recreational and commercial vessels.